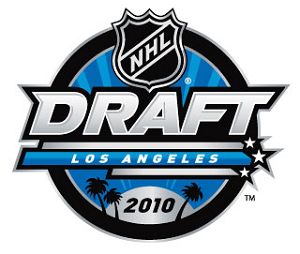 When the name of the second overall draft pick in 2010 NHL Entry Draft is announced over the PA system at Staples Center, the young man that strolls to the stage will be putting on a black and gold jersey with a spoked-B on the chest. The Bruins drew the second overall pick in the 2010 NHL Entry Draft after the ping pong balls were drawn in the NHL Draft Lottery on Tuesday night. The pick was originally owned by the Toronto Maple Leafs and was part of the deal that sent Phil Kessel to Toronto. Chances are the Bruins will take whichever of the two highly-touted forwards (Taylor Hall and Tyler Seguin) that is not selected by the Edmonton Oilers, who will have the first overall pick.