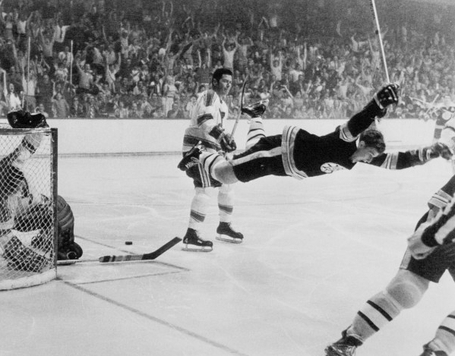 The Bruins will honor Bobby Orr and commemorate "The Goal" by unveiling a statue that depicts an airborne Orr after his Stanley Cup winning goal against the St. Louis Blues in 1970. The bronze statue that will be unveiled on Monday, May 10th will be a permanent fixture outside the TD Garden on the west walkway facing Causeway Street.

The statue was sculpted by Harry Weber, who has created several other statues and sculptures of sports figures including the Doug Flutie statue outside Alumni Stadium on the Boston College campus, memorial pieces honoring Los Angeles Angels of Anaheim pitcher Nick Adenhart and golfer Payne Stewart, several statues for the St. Louis Cardinals including Stan Musial, Jack Buck, Ozzie Smith, and Bob Gibson.