The Man behind "The Goal": Q&A with Harry Weber, the sculptor of the Bobby Orr statue

Share All sharing options for: The Man behind "The Goal": Q&A with Harry Weber, the sculptor of the Bobby Orr statue 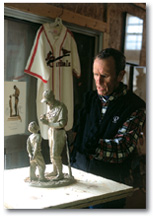 The Bruins will honor Bobby Orr and commemorate "The Goal" by unveiling a statue that depicts an airborne Orr after his Stanley Cup winning goal against the St. Louis Blues in 1970. The bronze statue that will be unveiled on the 40th anniversary of "The Goal" on Monday, May 10th will be a permanent fixture outside the TD Garden on the west walkway facing Causeway Street.

The statue was sculpted by Harry Weber, who has created several other statues and sculptures of sports figures, historical figures, and wildlife. Some of his work includes the Doug Flutie statue outside Boston College's Alumni Stadium, memorial pieces honoring Los Angeles Angels of Anaheim pitcher Nick Adenhart and golfer Payne Stewart, several statues for the St. Louis Cardinals including Stan Musial, Jack Buck, Ozzie Smith, and Bob Gibson, the Oscar Robinson Trophy (awarded to college basketball's most outstanding player), and the Larry Bird Award (given to the Missouri Valley Conference's player of the year).

I recently had the opportunity to ask sculptor Harry Weber a few questions about the Bobby Orr statue project:

When were you first approached about sculpting the Bobby Orr statue and who approached you?

In November of 2009 a Boston hockey fan (and former classmate of Doug Flutie's), Dan Flynn contacted me and asked if I would be interested in doing a statue of Bobby Orr. He had seen the bronze of Flutie I had done for Boston College and wanted the same kind of "accuracy of action" in the representation of Bobby.

I sent him a proposal that detailed every aspect of the process and he met with John Wentzell, president of TD Garden, and he and the Bruins decided to go ahead with the project. Mr. Wentzell contacted me, we agreed on the basic design and I started the process in early December.

How long did this piece take to complete and what is the process like to create a bronze statue like the Bobby Orr statue?

Normally a statue of this size and complexity takes six to nine months to complete. In this case we only had five since the Bruins wanted to dedicate the statue on the 40th anniversary of "TheGoal" that won the Stanley Cup in 1970 ... May 10, 2010.

The process has changed little in the two thousand years in which bronze statues have been created.

The start is a Maquette or small model (about 2 feet high). We solve all the problems of movement and 3 dimensional accuracy in this size and then build an armature in full size using the maquette as a reference. Unlike a painting, a statue has to work visually in every viewing angle and in most cases (including this one) representations of action are based on a single photo from one perspective. The countless other angles of viewing have to be imagined.

When Bobby and the Bruins approved the model, we created the statue in full 110% life size in clay in my studio. We started the large statue in January and both Dan Flynn and john Wentzell came to the studio to approve it in late February. To complete the clay in this time involved quite a few sixteen hour days.

The statue was then taken to our shop (VMD Sculpting) in downtown St Louis where molds were made and waxes were pulled from those molds. The waxes were then sent to Ad Astra Foundry in Lawrence, KS for casting. The statue was cast in over a dozen pieces which then were shipped back to us and welded together. The welds are invisible because considerable time was spent "chasing" the seams with grinders and other tools. All these processes are highly labor intensive and require great technical skill. I am lucky to have long time associates in Vlad Zhitomirsky and his son Mikael who do this work flawlessly.

The process in this case was made more complex since we had to assemble the statue around a stainless steel armature (skeleton) to make sure it would look like Bobby as "flying" and to insure the stability of the piece.

Finally, the patina is applied to "color" the bronze and make sure each detail stands out. We are actually doing this today and tomorrow in our downtown shop. [Editor's Note: April 29th & 30th]

Was Bobby Orr involved in the process?

I talked with Bobby on the phone to get an idea of how he wanted to be portrayed. He also reviewed the detailed model and made some inputs on the position and approved the result. I am pleased to say that he is as nice a guy as you could imagine.

Do you conduct a lot of research about a subject's personality or playing style to capture the essence of that player?

In every case like this we do considerable research to "get it right". I this case I watched the film of the game several dozen times and had reams of large photographs of Bobby as well as the books, "The Goal" and "Orr on Ice".

Fortunately, I have a nephew Bobby Vitt who deals in Hockey memorabilia and is an expert on vintage gear, and another nephew Tony Hrkac who was an NHL player for a number of years for several teams to ask about "the finer points".

I find it somewhat ironic that a guy from St. Louis was commissioned to capture "The Goal". Are you a St. Louis Blues fan?

I am primarily a "sports fan" first and St. Louisan second. I actually watched that game in 1970. Bobby Orr was a wonder to me then and throughout his career. I don't think there is any doubt that he was the greatest ever to play the game ... Sorry Wayne.

Also, I lived in Boston twice; once as a Navy LT taking a Destroyer through the Boston Navy Yard in 1968, and later working in Advertising in the mid seventies. North Station was my T stop. I watched and rooted for the Bruins whenever I got the chance ... and I'm sure as hell rooting for them now.

Is there added pressure when you are recreating an iconic moment like Orr's goal or Doug Flutie's hail mary pass?

There is always pressure when you are representing a great athlete or historical figure. You want to get it EXACTLY right both in the accuracy of the physical form and the emotion of the moment. While I am working I try to feel what it must have been like to feel all that adrenaline coursing through the subject's veins.

You want to get the essence of the thing for all those people who cherish the memory and all those others who never got a chance to see it.

What are some of your favorite pieces that you have created?

Frankly, I like anything that moves or moves people when they see it. When I do historical figures I want to get what they were like at the moment I portray them not just what they looked like. The Lewis and Clark statues I've done and a bust of Tennessee Williams stand out for me in this regard.

Do you have any sort of hidden signature or some element that you include in your work?

I do, but you'll never find it. My signature is very visible on the base of the statue.

Is their any small detail of "The Goal" statue that only a diehard Bruins fan would notice or appreciate?

Lots of stuff! The skates, the gloves, the printing on the Victoriaville stick, the haircut, the loop in the glove laces, the fact that he took the laces out of his jersey ... all of it was as real as we could get it.

I do a lot of horses. I would love to do a piece of Willie Shoemaker riding Big Ben in life size. He's got such milage on his face at that stage in his career.

Do you have any work coming up that we should keep an eye out for?

I'll be doing a statue of Dred and Harriet Scott for the Old Courthouse where the Dred Scott decision was handed down. I just finished a bust of M Lewis for Grinders Stand on the Natchez Trace in Tennessee and I'll be putting up a nine foot statue of Chuck Berry across from the Blueberry Hill night club where he still performs. 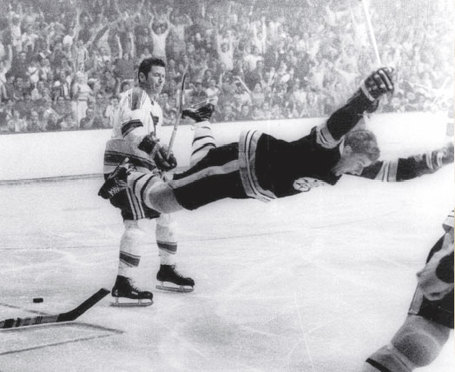 Thank you to Harry Weber for taking the time to answer my questions and providing some great background on the Bobby Orr statue. I can't wait to see how it turned out. If it is anything like his other pieces, it will be a great addition to the area around the TD Garden and a source of pride for Bruins fans for years to come.