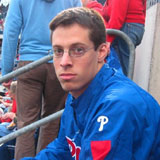 Travis Hughes of Broad Street Hockey and I decided to do a little Q&A so both fan bases can get to know their team's opponent better. My answers to Travis' questions can be found over at BSH.

What is in Brian Boucher coffee milk? Can he really keep this up?

I think he can. He's always been a streaky goalie, but he really hasn't been doing anything too phenomenal. He's just not giving up soft goals, he's solid positionally, and he's getting excellent support from his defense. In fact, the team defense as a whole was probably reason number one that the Flyers were so dominant over the Devils in round one. The more pertinent question may be if the defense can keep it up, because Boucher certainly can. I think the defense will as well, for what it's worth.

Will the Flyers be able to crack Tuukka Rask without Jeff Carter and Simon Gagne?

Certainly. Claude Giroux is emerging as a real playoff star, Danny Briere is always a threat, Mike Richards has been unbelievable all playoffs, etc. Scott Hartnell really needs to pick up his game, and if he does that, the Flyers will be very dangerous offensively. We're kind of blessed in that we have such a potent offense, it doesn't really make too deep an impact when two guys -- even if they're of the caliber of Gagne and Carter -- leave the lineup.

The biggest loss from them, especially Gagne, is on the defensive end. But he could be back by the end of this series, and I think the rest of the team will be fine without him in the time being. Carter is out for the rest of the year now matter how deep the Flyers go, it appears.

How nervous are you that if Boucher goes down, the Flyers will be forced to play a guy with 40 minutes of NHL experience?

It looks like Michael Leighton will be back sooner rather than later, and by that I mean around Game 2 or 3, it seems. So no, I'm not too worried. We're more than aware that injuries can happen at any time with goaltenders, but I think the hockey Gods have given us enough of them this season that we won't get anymore for quite some time. At least we can hope.

How is it possible that the Flyers went an entire series without a major penalty? Are we seeing a new softer Flyers team or will the rough stuff be back in round 2?

Softer? No. More disciplined? Hell yes. Peter Laviolette has them playing much smarter, and a lot of that has to do with a new and improved Dan Carcillo. Most of the penalties they take these days are of the lazy obstruction variety, or they're some combination of Hartnell being stupid or Briere getting little-man syndrome and high sticking someone in the face. On the whole, though, they're still a very physical team but they're just using their brains more. The B's very well might bring the worst out of them though, which could be a problem with one of our best PK men, Ian Laperriere, out of the lineup.

What are your predictions for the series?

It's going to be physical. It's going to be long. Ultimately, I see the Flyers playing suffocating defense, blocking a lot of shots, and continuing to do the same types of things they did against the Devils. With the Bruins lack of offense, I can't see them getting many quality scoring chances. Pronger is going to punish Savard all series long (and Jack Edwards will flip out and put together another one of his YouTube gems, I guarantee).

It's going to come down to the Flyers offense against Rask and the B's defense. I'm confident in their ability to control play in the Boston end, but I could certainly see Rask stealing a game or two. I'll say the Flyers win it in six, but it's going to be a damn close six.

Thank you to Travis for answering my questions about the Flyers and coming up with a great list of questions for me. Be sure to check out Broad Street Hockey throughout the series. Travis and his crew over at BSH do an excellent job covering the Flyers...and I'm not just saying that because he is technically my boss now.