Share All sharing options for: Mayor Menino looks back fondly on that "ionic" moment when "Varitek split the uprights" 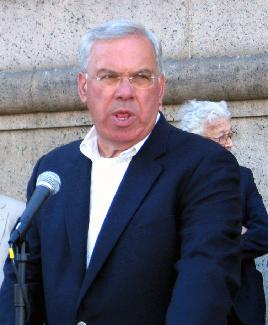 It looks like Mayor Tom "Mumbles" Menino has stumbled on his words once again. Joe Haggerty of Comcast Sports Net New England is reporting that during the Mayor's speech at the unveiling of the Bobby Orr statue outside the TD Garden, Menino came out with this gem:

"Boston has an amazing set of remarkable athletes whose actions in the moment have become (sic) ionic in sports. Havlicek stole the ball. Fisk waved the ball fair. Flutie launched the Hail Mary pass. Varitek split the uprights. Today we honor one of the most brilliant moments: Bobby Orr flying through the air. Who could forget that play against St. Louis as the Bruins beat the Blues to bring a Stanley Cup to Boston."