Share All sharing options for: With the 15th pick in the 2010 SB Nation NHL Mock Draft... 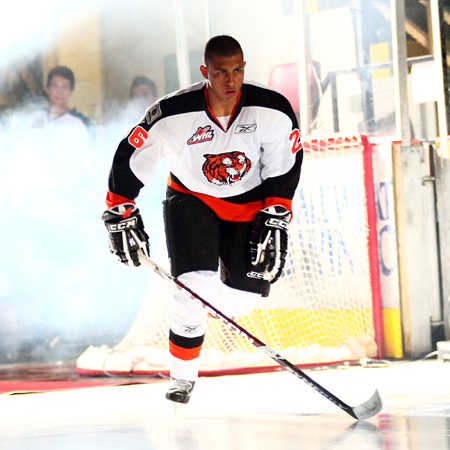 With the 15th pick in the 2010 SB Nation NHL Mock Draft, the Boston Bruins select Emerson Etem of the Medicine Hat Tigers.

The #1 rule of drafting is to take the best player available. The buzz about the Bruins' second pick in the draft is that they are targeting a defenseman, but with most the draft's premier blueliners already off the board in the mock draft I went with the best player still in the stands. The 6'0" 190 lb right winger played his junior hockey with the Medicine Hat Tigers of the WHL, where he posted 37-28-65 totals in 72 games. He is ranked 8th among North American skaters by Central Scouting.

Etem grew up in the "hockey hot bed" of Long Beach, CA, where he learned to the game by playing roller hockey before taking his game to the ice. Etem attended Shattuck-St Mary's in Minnesota, a prep school that is known for churning out NHL players. Some of the school's alumni include Sidney Crosby, Zach Parise, Jonathan Toews, Jack Johnson, Ty Conklin, Joe Corvo, Patrick Eaves, Ryan Malone, Kyle Okposo, and Drew Stafford.

According to those that have witnessed Etem's progress as a player, cite his work ethic and desire to improve his game as some of his biggest strengths. He has been training the past three summers with world-renowned trainer T.R. Goodman alongside Chris Chelios, Mike Commodore, and Mike Comrie.

The scouting report on Etem is that he is a very strong skater that can burn you with his speed or take away time and space on the forecheck. The left-handed Etem plays the off-wing and has a strong wrister with a quick release.  The knocks on Etem seem to be his unorthodox hunched-over skating style and lack of physicality. He could also use some work in his own zone, if he wants to become a legitimate 2-way NHL forward. The winger, who just turned 18 this week, is probably still a few years away from cracking an NHL lineup and will most likely stay in juniors next season.

I would be surprised if Emerson Etem is still hanging around when the Bruins pick for the second time at #15. Players with his offensive skill set usually don't stay on the board for long. You can bet that the Long Beach native will have a large contingent of supporters at the Staples Center on Draft night.

- Etem comes from a family of rowers. His father rowed for the U.S. Naval Academy. His mother rowed in the 1984 Olympics and competed in four world championships. His brother, Martin rows for the U.S. Under-23 National team.

- Etem enjoys surfing in his free time. While the 3 foot swells of New England beaches may not compare to the waves on the left coast, he would still be able to get to continue his hobby if he played for Boston.

- Much like current Bruin Marc Savard, Etem has the music taste of a 14 year old girl. He lists Ke$ha's "Tik Tok" as his favorite pump-up song.