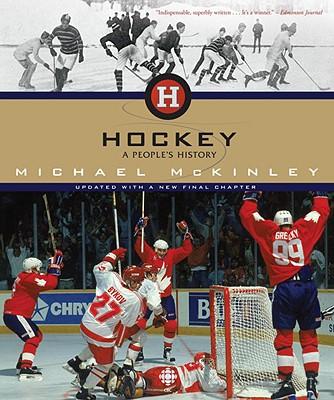 I recently had the opportunity to interview Michael McKinley, the author of Hockey: A People's History. (Editor's Note: This interview was conducted via e-mail. I realize some of the follow-up questions would not make sense if asked in sequence during an in-person interview.)

It is clear you conducted tons of research to create the definitive history of the game of hockey. How long did the project take to complete from the initial concept to the publishing of the first edition?

It was remarkably fast—about a year and a half. I wrote a book called Putting a Roof on Winter that tells the story of hockey from the first indoor game in Montreal on March 3, 1875 up until the 1972 Summit Series. CBC TV read it, and wanted to build a TV series—in a similar style to Ken Burns’ "Baseball", though with dramatic recreations of games in HD –so asked me if I’d like to write the book accompanying the ten hour TV series. So, I’d already done a lot of research for the first book, and then had the glorious luxury of about 40 research assistants, as the TV people sent me all their research, and I sent them mine, and we worked off each other quite seamlessly. Doubt that working environment for a book will ever happen again, but I enjoyed it immensely.

The book can be read in sequence as a pleasure read, but the large format and stunning photos also lends itself to being a coffee table book. What was your initial vision for the book?

Well, the book was designed to be a history in and of itself, as well as a companion to the TV series. So, if you wanted to dip into it and find out more about, say, Boston’s great Kraut Line, you could do that in a sidebar feature on great lines, and of course, then explore more about the Bruins in the text.

What team did you grow up watching and are you still a fan of that team?

The Vancouver Canucks, and yes, I’m still a fan, and yes, my psychotherapist is very happy as I’m paying his mortgage.

Besides being a fan and writing extensively about the game, have you been involved with hockey in any other way?

I have played in beer leagues in Vancouver, and now looking to form one in my neighbourhood in Brooklyn, New York, where I now live. My daughter, who is five, knows how to skate but wants to try her hand at hockey, and Hockey USA has a brilliant program whereby they’ll give a child all the gear, including skates, and three hours of Saturday morning instruction for four weeks –all for $35. If the child likes the sport, then the parent can invest in gear and so on, but it’s a wonderful program and my daughter will start it in the fall, so perhaps I might wind up as a coach. I still hope to win the Stanley Cup, somehow, and being a Vancouver Canucks’ fan, long ago realized I’ll have to do it myself!

What is your greatest hockey memory?

I was just a kid when Paul Henderson scored his goal to win the 1972 Summit Series in the 8th and final game against the Russians, but I remember it vividly. My dad was home for work with a cold, and I was home, and we watched it together, and the sheer joy of that last minute victory after so much adversity for Team Canada was really the beginning of my love affair with the dramatic power of sport

You co-authored Willie O'Ree's autobiography. What was that experience like? Were there any stories from Willie that didn't make it into the book that Bruins fans would find interesting?

Willie O’Ree is a wonderful man—generous, insightful about both the game and people, and very diplomatic. It was a children’s book we did together, so there were a couple of stories that didn’t make it in, and both involved violence against O’Ree on the ice (and I can’t tell them here either because the kids book is still out there…). Suffice to say O’Ree loved playing in Boston, and remarked several times how great the fans were there. He also liked playing in Montreal, but was not keen on Chicago.

While doing your research for "Hockey: A People's History", was there one story or fact that really stands out that you uncovered that you found really interesting?

I think the one thing I really wanted to emphasize was how much the United States figures in the story of hockey. Indeed, the world’s first professional hockey league was founded in the US in 1904, and Canadian players flocked to it, as the reigning code of Victorian amateurism in Canada said only a prostitute would take money for playing, and yet the rink owners saw no such conflict in charging people to watch these players play for free. The International Hockey League lasted until 1907 and had teams in Michigan, Pittsburgh, and one in Ontario, and folded due to an economic crisis in the mining country from which it sprang. However, the Canadian owners got the message and started a pro league in Canada in 1908, and we have the invention of the Montreal Canadiens in 1909, but without the IHL in the USA, who knows how long the pro game would have taken to develop?

What is the most interesting Bruins related story you found?

Bobby Orr. I mean, he was the Bruins in so many ways, and it’s shocking to remember he retired at age 30, with two Stanley Cup rings, eight Norris Trophies, and knees so bad he said if he had been a horse they would have shot him. Orr revived the great Bruins franchise, and to this day still remains the definitive face of it—even though his genius in the black and gold happened four decades ago.

You wrote a few pages in the book about the hockey blogosphere. Do you think the NHL has done a better job than other professional sports leagues in North America of leveraging the power of social media?

I don’t know if the NHL has done a better job—I think the bloggers have. There are so many knowledgeable and committed bloggers in hockeyland that the NHL pretty much had to draft on to them in order to avoid being left out.

Do you think the rules changes coming out of the NHL lockout have improved the game?

Yes. I like the fact the referees, for the most part, actually call the rule book now, and I like the fact that speed and skill have been rewarded. Nevertheless, they have not acted quickly enough to eliminate head shots, and punish those who deliberately inflict them.

Do you think fighting should always have a place in the pro game?

Nope, time to say good bye. We don’t see it in the Olympics, we don’t see it in the playoffs, and yet, those two tournaments give us some of our best hockey. And they do so without the attendant stickwork that proponents of fighting say would creep in if we removed this "regulatory" force of two guys trying to beat each other up in the middle of a game. Yes, fans stand and cheer when a fight happens, but more of them stand and more of them cheer when the home team scores a goal. Fighting should have been gone a long time ago, and perhaps the next generation which has grown up without it in their leagues (for the most part, junior hockey in Canada is still afflicted) will just not want to do it and it will slowly disappear. I don’t think the NHL will ban it anytime soon, because the NHL brain trust is part of the fighting culture.

You live in Vancouver, were you able to catch any of the hockey games during the Olympics?

I now live in New York City, but was in Vancouver for the Olympics. I saw am amazing men’s game between Norway and Switzerland that saw the plucky Norwegians take the heavily favored Swiss into OT (and lose). I also saw the US women trounce the Swedes, and of course, I watched the gold medal game—but from a hotel room in Hawaii, where I was with my family. If you weren’t a fan of hockey before the Olympics and watched that game, you should be one now.
The book seems to be written from a Canadian prospective for a Canadian audience, but all hockey fans should find this to be a good read. Can hockey fans down here in the Lower 48 find your book at their local bookstore?
Again, the USA has a great hockey culture, and tradition, and was the country that turned the game professional, and gave the game some of its great players and coaches. This book is as much for American fans as Canadian, and if USA fans cannot find it in their local stores, they can find it online at amazon.com, or the Canadian site, amazon.ca.
Thank you to Michael McKinley, Stephen Crane of CraneCreek Communications, and McClelland & Stewart for giving me the opportunity to conduct this interview.