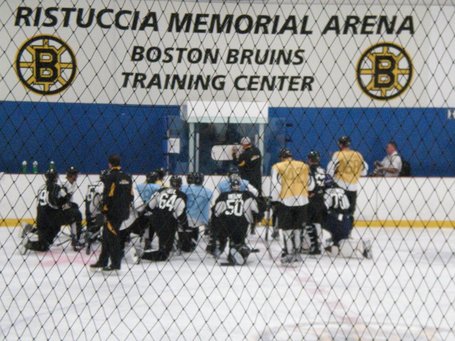 The Bruins annual development camp will get underway this morning at Ristuccia Arena in Wilmington and run until Saturday, July 10th. The first day of the camp is dedicated to off-ice fitness testing and team building activities. The Bruins prospects and camp invitees will take the ice for the first time on Wednesday. All on-ice sessions are open to the public, however today's activities are closed to the general public. The camp will be Bruins fans' first chance to get a look at first round pick Tyler Seguin, newly-acquired defenseman David Warsofsky and several draft picks from this year's draft. This will be the fourth year that the club has held the development camp.

*Schedule subject to change. Call the Bruins media and fan info line (617-624-1910) for the most update schedule before heading out to the rink.