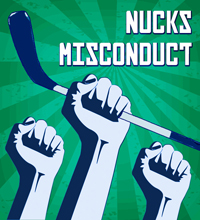 In an effort to get Left-Coasters to shut up about East Coast bias and create summer content, SB Nation's Eastern Conference hockey sites decided to extend the olive branch to our blogging buddies in the Western Conference. Each site from the East was matched up with a site from the West and we exchanged questions and answers. You may remember that we did this last summer with Mile High Hockey. This year, Stanley Cup of Chowder drew Nucks Misconduct, SB Nation's Vancouver Canucks site. Nucks Misconduct Co-Site Manager or "Bartender" Yankee Canuck was given the duty of fielding my questions, while his fellow "Bartender" Sean Zandberg was conveniently "out of pocket this week". In hindsight, I wish I had asked him about their logo: an ode to the '68 US Olympic track team or a 3-armed giant looking to play some puck?

Was there any legitimate concern that the NHL would overturn Roberto Luongo's deal?

No more than there was last summer when he signed it. I don't see the NHL using the Kovalchuk decision to overturn Luongo, Savard, Hossa or anyone else's deal. 11 teams are currently paying more for their goalies than Vancouver and several other goalies - Lundqvist, Huet, Giguere, Backstrom, Miller, Vokoun, Ward and Kiprusoff - all have larger cap hits this season. It's a bear of a contract yes, but the bigger question is can he earn his keep, so the next handful of seasons will be define whether he's worth that contract.

What are your thoughts on the Bill Sweatt signing?

Sure sounds like the Hawks would have liked to have kept him, the Leafs certainly wanted him and maybe brother Lee inking a deal earlier this year with Vancouver was a tipping point. He's heading into camp on the strength of his collegiate numbers and his speed (similar to Mason Raymond in fact). With the Canucks bottom six in complete transition (Malhotra aside) and Burrows likely starting the year on the LTIR, Sweatt could certainly crack the lineup with a strong camp. I suspect he'll end up in Manitoba but I'd be fine if he proves us wrong.

There have been reports that the Bruins might being interested in Kevin Bieksa. As someone who sees him play every night, how would you describe Bieksa's game?

We've described Bieksa a few times this summer as a risk/reward-type player. He has shown a great offensive upside and an unquestioned willingness to stick up for his team; he's a proven top four guy. He also frequently forgets he's a defenseman (see Versteeg's goal in game six of the playoffs), takes some lazy penalties and has a habit of getting unusually horrific injuries that sideline him for months. If he can stay healthy and read the ice better on transitions, he is worth the acquisition but I would hedge my bets and partner him up with a stay-at-home blueliner...juuust in case.

After years of horrible jersey designs, the Canucks finally have a sharp look. Two questions: Why did it take them so long to include Johnny Canuck? Were the giant V jerseys the worst jerseys in NHL
history?

I'm no jersey historian, but I think it's a case of testing a few ideas before a look towards the past. The stick-in-rink design (my favorite) was the original expansion jersey which then flipped to the V design you love so well and the skate design followed that. The Orca on the jersey now was from the old parent company Orca Bay Sports & Entertainment and, though they are gone, the whale remains along with an infusion of Johnny Canuck and stick-in-rink elements. Most fans I know just laugh it off the jersey changes or at least embrace the comical frequency of them. Besides, Boston knows a thing or two about jersey design gone amok right? ;)

What is your prediction for the Canucks this season?

Yikes...after last season's injuries nothing is predictable with these guys. All things being equal, they take the NW again but what happens after that is ridiculously debatable. THN certainly thinks highly of Vancouver, but so did several MSM sources last year. I'll wait until April rolls around, but there's certainly reason for fans to be optimistic.

Thank you to Yankee Canuck for answering my questions. For my responses to his questions, check out Nucks Misconduct.