Share All sharing options for: Bruins Rookie Camp gets underway on Sunday 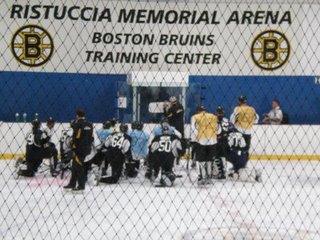 The Bruins' young whippersnappers will be on the ice at Ristuccia Arena in Wilmington on Sunday to kick off the start of this year's rookie camp. The players will go through fitness testing in the morning before hitting the ice for their first on-ice practice at noon. The morning fitness testing session is closed to the public, but the afternoon session is open to fans and media.

The following players will participate in this year's rookie camp:

The big boys will get their camp underway on Friday, September 17th with fitness testing before they take the ice at TD Garden on Saturday, September 18th. Look for a few of the players participating in rookie camp to get bumped up to the veteran training camp.