While the team on the ice has shown toughness in this series, the Bruins organization has gone soft. Throughout the playoffs, the Bruins have posted humorous posters and banners in and around TD Garden that feature "The Bear" taking good-natured shots at the opposing team's fan base. Montreal and Phildelphia's fans just laughed them off, but the Tampa Bay fans and their inferiority complex have raised a stink. Some hacky small market radio host named Cowhead saw an opportunity to get some publicity and he put out a call to listeners to call the Bruins and urge them to take down their signs that take aim at the Lightning's small fan base. I figured the B's will tell the dozen callers from Tampa Bay to piss off, but the Bruins backed down and took down the signs.

Why back down to a talentless clown like Cowhead, who needs to resort to repeated homophobic slurs to appeal to his listeners? In his plea to Tampa Bay Lightning fans, the classy Cowhead used several slurs for homosexuals, calling Bruins fans "fags" and referring to Bruins employees as "faggy", "faggotty", "gay", and "bitches". 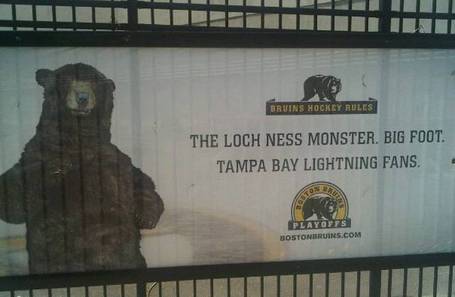 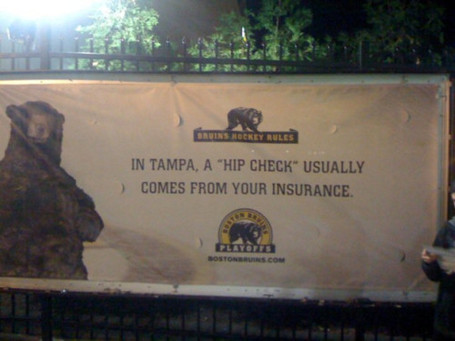