Share All sharing options for: Khokhlechev Looks To Be Major Russian Steal 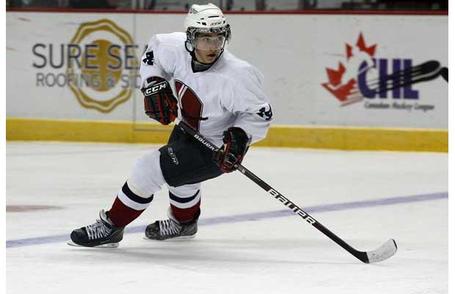 No one is talking about this kid.

On the one hand that’s life when you are the 40th selection in the NHL Draft, on the other sometimes people just can’t figure out how you fell down that far. Alexander Khokhlechev is most certainly one of the latter.

It doesn’t help that his last name has probably been butchered countless times since coming over. It’s Coke (like the soda)-la-chev by the way, can’t you just hear the Jack Edwards puns already? And despite his draft slot we may be hearing them sooner rather than later.

Khokhlechev or "Koko" as he is known in Windsor carried the same stigma that most Russians have in the past few years, teams will assume he’s a flight risk. That’s without even mentioning his size (he stands at a crisp 5’11" and 174lbs) and his age, he just squeaked into draft eligibility with his late birthday.

Despite the knocks on him Khokhlechev has, so far, shown nothing but the opposite of what scouts fear about young Russian snipers. For starters he came over from his hometown of Moscow at the age of 16 to play for the Windsor Spitfires and went on to be the team’s third leading scorer with 76 (34 goals, 42 assists) behind only established pro prospects Ryan Ellis and Zach Kassian. In the playoffs his 20 points (nine goals, 11 assists) led all OHL rookies. For a Spitfire squad fresh from losing Taylor Hall Khokhlechev did a decent job of filling in.

His size Is still an issue but he overcomes it with great skating ability. What he lacks in raw power he makes up for in elusiveness and sheer tenacity for the net. He’s not one that will go through you but he will do his best to get past you anyway he can. He is also not dependent on using his above average shot, doing what he can to get in dirty areas and banging home rebounds.

"The first thing that jumps out about Khokhlachev’s game is his heart," writes the Scouting Reports Andrew Weiss. "With a grinder-like style, Khokhlachev hustles on both the forecheck and backcheck. He has no problem driving to the net without the puck and banging home a rebound or setting up backdoor for a pass."

It’s that tenacity that made him stand out to Peter Chiarelli and the Bruins Scouting staff. While many were wary of his commitment to North American hockey a quick look at his history shows that Khokhlechev has nothing but the NHL on his mind.

At 16 he along with fellow Russian prospects Alexander Avtsin, Alexi Marchenko, and Arseny Kardailsky were made the faces of the KHL’s new junior league. Not long after he bolted to Windsor leaving what may have been a million dollar pay day if he continued on his track to the KHL.

His decision will probably do him no favors when the Russian junior team is selected but Khokhlechev knows what he wants, as he has made major strides in adjusting to the North American game including greatly improving his English by the end of his first year.

"It is my dream to play in the NHL," Khokhlachev told The Windsor Star, upon his selection by the Bruins. "Coming to Windsor was part of my plan. (Saturday), I was drafted by the Boston Bruins and I am very excited. Now, the next part of my career begins."

Maybe Bruins fans should start working on that pronunciation.