NHL Players in 140 Characters or less

Share All sharing options for: NHL Players in 140 Characters or less

As if it hasn’t been said enough already, Twitter has changed the way sports fans follow their favorite teams, players and interact with one another. It seems like in the recent months, Twitter has exploded with NHL players joining Twitter and if they already have an account it certainly seems like they have been using it a lot more even if it is to talk about golf. Oh the advent of the off season.

With a whole season of hockey mixed with Twitter behind us and a couple months of the off season there as well, let’s review a bit of hockey players and their use of Twitter this season.

First and foremost, hockey players are just getting it done in the Twitter department. Maybe it was Paul Bissonnette’s excessive tweeting (and getting kicked off and returning with a vengeance) that inspired other players to join in on the fun. At first it seemed like a bunch of American Hockey League players were on Twitter with a lot of free time on their hands, especially the Worcester Sharks, but now NHL tweets are regular. Sure there are some generic "Congrats to my boys" or "blahblahblah *link to my website*" tweets but for every five of those, there are about a thousand tweets from Bobby Ryan about his experiences in movie theatres or Anthony Stewart giving a Twitpic play-by-play of an 80’s playlist he's listening to.

That is another thing about these players getting it done: they’re getting better at it. Anyone following a hockey player on Twitter really shouldn’t have high expectations in the spelling and grammar department, so throw that out the window entirely. What is better is how much more they tweet, which is what fans want. They tweet a lot more about just day to day stuff and some tweet a lot of pictures. Ryan Jones, for example, regularly tweets pictures of his dog Bailey but the best is when they tweet pictures of each other. Likely Steven Kampfer wins the award there for his hilariously awkward picture of him, Brad Marchand and half of Tyler Seguin's face trying to get rid of a fake account. 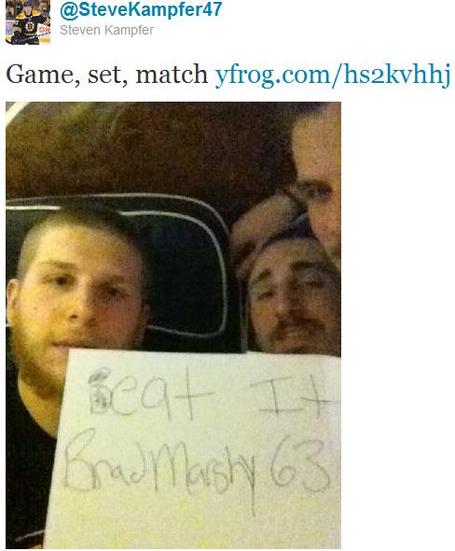 With all these players revealing themselves on the world wide web, fans are able to witness the beauty of a chirp. Players chirping each literally @ each has become a daily staple. Last Sunday there was the great debacle about "Twilight" vs. "Harry Potter" that was discussed between Bobby Ryan and Mike Commodore, revealing Ryan’s guilty pleasure. Then sending shockwaves through the spine of 16 year old girls across North America was Ryan Whitney responding to Taylor Hall with mention of the rookie’s rendition of "Love the Way You Lie." 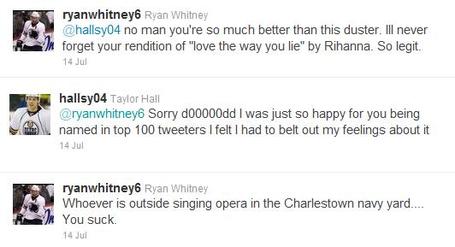 It isn’t just the interaction with each other that is entertaining to see pop up on a timeline but also the interactions with fans. People get so pumped when they get an RT or a response. Sometimes a player is bored enough to ask for questions, in which case fans can learn specific little factoids (Like that Taylor Hall is single, as he answered on Sunday).

The best interaction to see is hockey players giving back through Twitter. Before he deleted his account, Devin Setoguchi donated $5,000 to a Cancer charity when he achieved his goal of followers and Ryan Jones did the same thing. Had he reached it in time, Steven Kampfer was going to give away playoff tickets if he reached a certain amount of followers.

Following these guys is well worth it. It is all fun and games though until the players don’t seem to realize the spotlight they are under. We all remember Dan Carcillo’s tweet to Paul Bissonnette and we’ve all seen the accidental direct messages that were supposed to go to girls. These slip ups (or intentional words) are well noticed and players have learned that that will get their account yanked from them much to the dismay of fans.