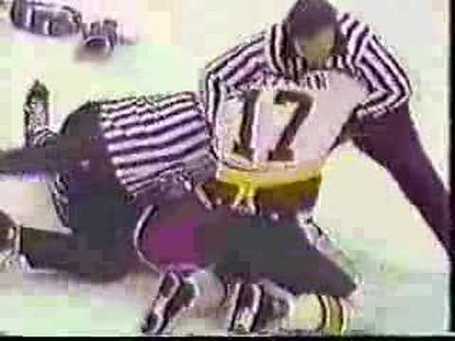 Stan Jonathan and Pierre Bouchard- Boston vs. Montreal May 21st, 1978

Tale of the Tape:

On May 21st, 1978 scrappy Bruin Stan Jonathan took on the much larger Pierre Bouchard during game four of the Stanley Cup Finals vs the Canadiens. Bouchard was known to be one of the biggest and toughest guys during his career, however pound for pound Jonathan may have been the toughest fighter in the league. Jonathan was one of the baddest guys during that era and the type of player you didn't want to go toe to toe with.

Six minutes and twenty-eight seconds into the first period, what looked to be just a push and shove match turned quickly into a blood bath. Both players started off landing a few bombs, but Jonathan's fury of rights slowed down the big man. Jonathan was known for being one of the best fighters who could switch hands in a split second and start banging with some lefts. Bouchard's face spit wide open from a brutal left and filled not only the ice with blood but engulfed the entire face of the referee trying to break the fight up. Pierre Bouchard lost a lot of respect in Montreal after getting his bell rung by the much smaller Jonathan. His career didn't last much longer after this incident and this event may or may not have contributed to his downfall.

Pierre Bouchard vs Stan Jonathan & Gilles Lupien vs John Wensink May 21, 1978 (via hockeyfights.com)

The Canadiens went on to win their 21st Stanley Cup later taking the series 4-2,, however the Bouchard Jonathan fight is one of those brawls that no one can forget and undoubtedly being most famous and gruesome post season fight in the rivals history. Bouchard may have raised the cup a few nights later, but he also won a shattered face courtesy of Stan "Bulldog" Jonathan.

Dropyougloves.com has even more coverage on this game and the fights involved. Check it out it is interesting.