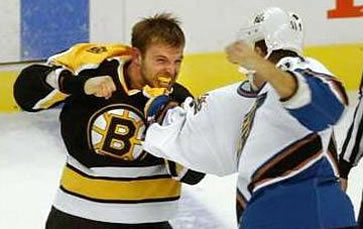 Tale of the Tape:

On January 5, 2002 one of the greatest brawls in NHL history was about to take place.   Mid way through the second period at the old Fleet Center, winger P.J Stock took a run at Washington's Rob Zettler which apparently angered the other Capital players.  As the teams line up for the drop of the puck, Coach Ron Wilson sends out one of his hit-men, right winger Stephen Peat to line up next to Stock.   Just before the linesman drops the puck, Peat is jawing at Stock letting him know why he's out there.  The ref drops the puck and as Stock tries to skate away  Peat is hanging on him like a hungry dog instigating P.J to fight.  The two face each other and agree that it is about that time to start making hamburger out of each others faces.  Once the gloves drop both connect with over twenty punches each while landing about ten brutal shots each.  A fury of punches were thrown in about thirty seconds and each fighter hardly slowed down.  Most would say that Stock came out the winner by a slight margin, but many would consider the fight a draw.  It is hard to pick a winner between a fight with the likes of this one.  Both deserve the win seeing how neither knocked the other out or fell to the ice after absorbing twenty bombs to the jaw each.

This wasn't the first or last fight between the two tough guys.  They pair first fought after a Bruins shutout earlier in the same season on October 6, 2001 and later next season on October 30, 2002 for round three.  According to the voters on hockeyfights.com, Stock finished the trifecta with a 3-0 record. Peat without a doubt held his own in all three matches and could have ended up on top in any of these bouts.  Whatever the outcome was, Stephen Peat and P.J Stock were two of the baddest guys to have ever laced them up and could take a punch to the melon just as good as they could dish one out.