Thursday Morning Open Thread: Getting it together

Share All sharing options for: Thursday Morning Open Thread: Getting it together

So I took yesterday off to move and it looks like my computer's power cord is being gimmicky as a result. Worst. Last night I went to see Andrew W K for his "10th anniversary of I Get Wet" tour, though, so that totally ruled. By the end of it half the crowd was onstage, like so: 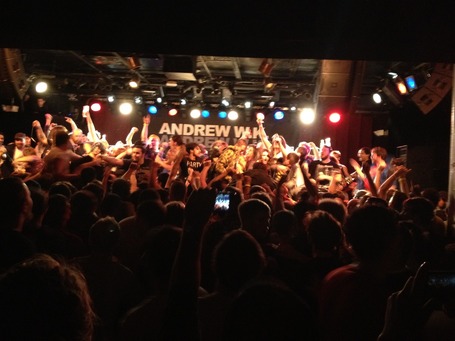 Goon is coming out in theaters in the US this weekend! But it's been out on demand for the last month so I hope you've seen it. If not, get to it!

Non-Bruins Highlight of the Night:

Michael Ryder scoring against Edmonton is rarely not going to make the cut.

Whats on tap, y'all?