Yesterday Aaron Portzline, intrepid Columbus Blue Jackets Reporter, wrote that Nash doesn't have any NHL teams located in Canada on his "approved" list. (You already know this because you read every links post, but let me go on) In the piece he quotes Brian Engblom:

"It says he wants to get away," said former NHL defenseman Brian Engblom, now an NBC analyst. "Every guy is different. Look at the kid (Justin Schultz) that just signed with Edmonton as a free agent. From what I could tell, he only wanted to play in Canada. I played in Canadian and U.S. markets, and I can tell you, it is different. To each his own. Some guys thrive on being under that microscope, of having that daily pressure of everybody watching you. And some guys really don't like that."

Nash's Approved List, by the way, breaks down to some of the premiere American-based franchises in the NHL: BOS, NYR, PHI, PIT, DET, SJS.

Here's a handy chart of those teams (in blue) and canadian teams (in red). It's sorted by percent of capacity of home and away games combined, but you can see that the US teams do at least as well as Canadian teams in most of these categories, and better in quite a few: 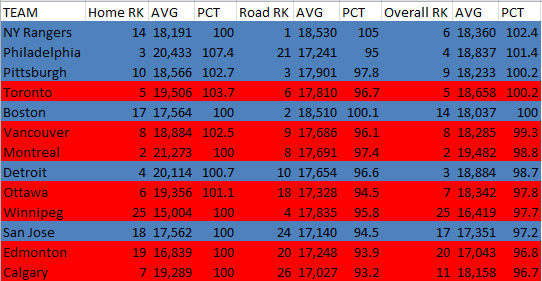 So it's not like he'd be playing in front of less people. Well, let's look at his next bit of reasoning:

I played in Canadian and U.S. markets, and I can tell you, it is different.

Well, let's take a look at which Canadian and US markets Engblom is basing this on. Engblom's Canadian-team experience:

So basically he played for VERY successful teams in Canada and pretty mediocre ones in the USA. I'm sure you've got a good handle on what it's like to play for a bad American team, Brian, but come on.

It's plainly obvious to anyone who looks at that list that Rick Nash wants to go to a good team.