Keeping Tabs On The Locked-Out Bruins

From the KHL to the SM-Liiga to the EIHL and everything in between, it's going to be pretty hard to track down and watch every Bruins player perform in the various European leagues they're all scattering to. On top of fighting with the language barrier, many of these leagues don't stream their games outside the country. So how can you keep track of Andrew Ference in České Budějovice, or Tyler Seguin in Biel - he arrives in Switzerland tomorrow around 11 am local time, by the way - without killing yourself trying?

Share All sharing options for: Keeping Tabs On The Locked-Out Bruins 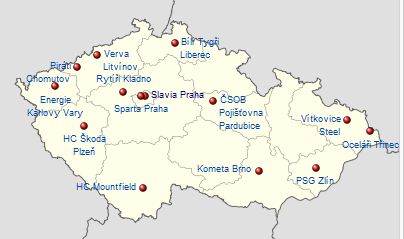 The Czech Extraliga has been in existence since 1993, upon the breakup of Czechoslovakia. Fourteen teams compete in the league; at the end of each season, the top six teams make the playoffs, teams 7-10 compete in a play-in round to produce two more playoff teams, and teams ranked 11th-14th play a play-out round to see who might get relegated. After the loser of the play-out round is determined, that team plays the winner of the 1. národní hokejová liga (second tier league in Czech Republic) in a seven-game series to see if relegation will happen.

Twitter accounts to follow to keep tabs on our players in the Czech Republic:
@sabrajaguar
@jonrowson
@Djob76

Where to watch Extraliga games:
I've been informed that sportlemon occasionally carries these games, though the quality is probably questionable.

Andrew Ference (České Budějovice)
So far, the only player returning to his club from the last NHL lockout in 2004-2005 is Andrew Ference, heading back to HC Mountfield in České Budějovice. Not only was Ference a big hit in Budějovice, but he helped his team climb out of the národní hokejová liga back into the extraliga by winning that relegation round. When the Bruins traveled to play against HC Bílí Tygři Liberec, Ference was warmly welcomed back to the Czech Republic by a multitude of fans who'd traveled from Budějovice to see the game. Mountfield has been a club since 1928, and they play in the Budvar Arena.

David Krejci (Pardubice)
Although David Krejci intends to play for Pardubice, that club is having trouble paying his insurance costs. He had also considered returning to HC Třinec during the lockout, as well; Třinec is where he played as a 14-year-old before switching to play for HC Kladno's junior team.

HC Pardubice has been in existence since 1923 as well, and they play in the ČEZ Aréna, which hosted the World Juniors tournament in 2002 and 2008. Milan Hejduk and Dominik Hasek are some of their famous former players. Pardubice plays against Tuukka Rask's HC Plzeň on October 26, and Andrew Ference's HC Mountfield on October 28.

Tuukka Rask (Plzeň)
In an odd turn of events, Tuukka Rask will not return to his home country to play for his former team, Ilves Tampere, but rather will go to the Extraliga to play for HC Škoda Plzeň. Plzeň was founded in 1929; they play in their own ČEZ Aréna, which was built in 1969. Plzeň is famous for their beer and is the fourth most populous city in the Czech Republic, and is located about 50 miles from Prague. It's the hometown of NHLers Petr Sykora and Martin Straka.

Rask has no ties to Plzeň but is already there; he flew to Prague this morning and is already training with the club. His transfer agreement could take until Saturday to finalize, and his first game will probably be Sunday against Sparta Prague. He'll face Jaromir Jagr, Tomas Plekanec and the rest of HC Kladno on October 11, which should be a good match to watch.

The KHL, or Kontinental Hockey League, is actually a recently new league, formed in 2008 from the remnants of the Russian Superleague. It is made up of 26 teams; 20 in Russia, and one each in the Czech Republic, Belarus, Latvia, Ukraine, Kazakhstan, and Slovakia. The winner of the 16-team playoff at the end of each season is awarded the Gagarin Cup, named after the first man in space, Yuri Gagarin. The playoff structure is very similar to that of the NHL playoffs, with teams from each conference playing within their conference until the final round. Last year's KHL champion was HC Dynamo Moscow.

Where to watch KHL games:
Atdhe.tw has streams of most of the games, as does onhockey.ru.

Anton Khudobin (Atlant)
Anton Khudobin is playing for HC Moscow Oblast, who have been described to me as "the underdog of Moscow." With three teams in that city (Spartak, Dynamo, and Atlant), Dynamo and Spartak are definitely the more popular favorites. Atlant plays in Mytishchi, which is just northeast of the actual city of Moscow (part of their name, Oblast, means "region" - they're not actually a city team.)

While Khudobin is currently the only Bruins player in the KHL, another local team has a Bruins prospect - Alexander Khokhlachev, playing for his father in Spartak Moscow. Atlant plays Spartak today. Khudobin has already appeared in two KHL games and is 1-1-0.

The Deutche Eishockey Liga, or DEL, was founded in 1992. It is known for having the highest number of American and Canadian players outside of North America; it's a popular destination for players tired of the AHL or who can't get a North American contract after finishing in the CHL or college. 26 players went to the DEL during the last lockout. The DEL consists of 14 teams. Eisbaren Berlin have won the DEL the last two years running.

Twitter accounts to keep tabs on our players in the KHL:
@84arussell

Where to watch DEL games:
Games are streamed Fridays at 1:25 EST on laola1.tv and Sunday games are at 10:25EST on servustv.com.

Dennis Seidenberg (Mannheim)
Seidenberg has committed to play for Adler Mannheim, where he will join his brother Yannic. They haven't played together in over ten years. Seidenberg has an "appointment" in Boston tomorrow, after which he will likely join the team in Mannheim. He'll join Marcel Goc in Mannheim as well.

The Swiss-A league is probably best known for hosting Joe Thornton and Rick Nash during the last lockout; they've returned to their old team, HC Davos, for this year as well. The league consists of 12 teams who play 50 games apiece before playoffs that do include a relegation round.

The Sm-liiga is the top professional league in Finland, founded in 1975. It consists of 14 teams, three of which are based in the capital region of Helsinki. In the Bruins organization, it is known for being the league where Tuukka Rask got his start; additionally, the Bruins have an agreement with JYP, who coincidentally also won the league championship last year.

Rich Peverley (JYP)
Oddly enough, Rich Peverley is the lone SM-liiga Bruins player during the lockout. He'll play for the team the Bruins have an agreement with; Jukka Holtari, the JYP player coordinator, is also the Bruins' top European scout.