Ah, the halcyon days of the 1967 NHL Expansion.

Share All sharing options for: "Which is the expansion club?" (Or, Bruins-Penguins, OTBH style)

Welcome to yet another installment of OTBH: ‘Origin of Rivalries' Edition! Last time we took a jaunt through the very first series of games played between the Bruins and one of their oldest historic rivals, the New York Rangers. That rivalry has taken another step forward, what with the B's beating the Rangers opening night. There were even bonus spirited scraps! Hockey. So great.

Not every rivalry, however, can be as heated or historic as the one between the Bruins and the Rangers (and let's not even try to compare to the one with the Habs. Nothing can live up to that perfection. When's the first Boston-Montreal game, again??). There aren't a ton of you who probably think to yourselves ‘Man, bring on that Bruins-Panthers game. Such delicious hatred!'

Ok, maybe there are some of you, but that's because hockey fans are crazy.

Then, of course, there are the ‘tweeners -- those teams that the Bruins have played in a variety of scenarios, and through that repeated exposure, have developed into rivals, of a kind. One such team? The Pittsburgh Penguins. Like the Rangers and Bruins, the Pens are expected to be near the top of the Eastern Conference standings this year. The upcoming Boston-Pittsburgh matchups should be intense, fiercely contested battles, and while those games might never carry quite the same heat as a Habs game, they're sure to stir the competitive fire on both sides of the bench.

So what's the origin story here? How did those first games between the Bruins and Penguins play out, and is there any foreshadowing in those long-ago matchups that we can relate to today's rivalry? Recent shenanigans aside (looking at you, Matt Cooke), the early relationship between these two teams wasn't particularly dripping with venom, but as with so much of hockey history, there's more to the story than initially meets the eye.

1967 brought with it six new NHL franchises, including the California Golden Seals, the St. Louis Blues, the Philadelphia Flyers, the Minnesota North Stars, the Los Angeles Kings, and the Penguins. The two resulting divisions were a mishmash in terms of geography -- all the original six teams were in the Eastern division, while the expansion teams were in the Western. In this divisional format, a team would only play each team in the other division a total of four times, meaning the Bruins only got brief looks at these six fledgling teams; the Penguins were no exception.

On October 29, 1967, the Bruins and Penguins played the first ever game against each other at Boston Garden, and Boston fans were in a tizzy of anticipation. Even though folks in Boston were seeing this PIttsburgh team iced for the first time, much about the makeup of the Penguins roster was familiar. The new franchises had all participated in an expansion draft that distributed players from the original six teams to the brand new teams -- the Penguins had loaded up not with young, inexperienced players (the route taken by many of the other expansion teams that year), but rather with veterans, including many former Rangers (including Andy Bathgate, among others). The Pittsburgh squad was, more so than the Blues or the Kings or any of the other Western division teams, a familiar one to Boston fans and players alike.

Adding to that familiarity was the presence on the Pens squad of future-hall-of-famer Leo Boivin, who had previously played 12 years for the Bruins and was a player described as "one of the last great body-checkers" (sounds like a Bruins player, for sure). So, to sum up: even though these two teams had never before played each other, the Bruins were going up against a squad filled with former Rangers players as well as one longtime former Bruin. What could possibly go wrong.

As it turns out, not much, at least in that first game. The game itself sounds like it may have been a bit of a let down, especially in the first (one fan went so far as to question which of the teams was the expansion team. Ouch, 1967 Bruins fan. Way harsh). Eddie Shack scored twice for the Bruins, with Phil Esposito and Gary Doak adding one each. The Pens tried to rally back in the third, scoring two, but the Bruins and goaltender Gerry Cheevers proved too much for them. FInal score: 4-2, Boston.

Boston players were the first to admit that the Penguins played well, final score notwithstanding, and old friend Leo Boivin and Pittsburgh netminder Les Binkley played a huge role in that. Still, maybe the win in that first game made the Bruins a little cocky, because they proceeded to lose the remaining three games of the season series pretty definitively. The Bruins had the last laugh, in a playoff sense -- they made the the playoffs, finishing with 84 points for third in the division -- whereas the Pens missed the playoffs altogether, finishing with only 67 points. The Bruins also got regular season revenge the following year, going 5-1-0 against the Pens and securing second in the division with 100 points. It was more of the same during the 1969-1970 season, with Boston winning the season series 5-0-1. In terms of rivalry, then -- well, there wasn't much of one in those early years. While the Penguins demonstrated their ability to dominate the Bruins in that first season (with the help of old friends and old foes alike), the Bruins were clearly the superior team throughout the late sixties and early seventies.

Of course, we all know the story since then -- the highs and the lows of both teams speak for themselves. However, for the last few years especially, when both teams have put together excellent, fun-to-watch squads, the competitive fire has certainly been stoked. The Bruins face the Penguins three times over the course of this shortened season. Somehow, I think the Bruins won't have quite as easy of a time dominating the Penguins this year as they did in the seasons just after the 1967 expansion -- but I bet these three games are going to be a hell of a lot more fun, too. 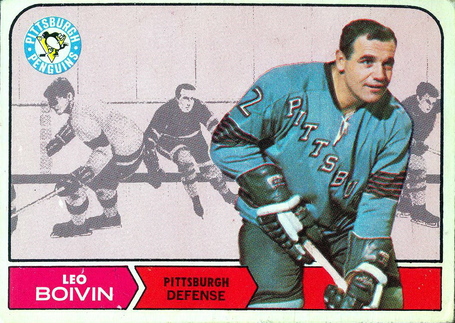 (I think he looks better in black and gold, personally.)