Bruins vs. Sabres Preview: It's the first Northeast Division game of the year!

It's kinda weird that six games in a 48 game season have gone by without a Bruins game against a team in their own division, right?

Share All sharing options for: Bruins vs. Sabres Preview: It's the first Northeast Division game of the year!

It's been over a year since the hit heard round the world. Can you believe it? Damn this lockout. While the Sabres have definitely gotten tougher in the aftermath of that game, it hasn't seemed to translate to success quite yet this year. After winning their first two games, they proceeded to lose their next four, most recently losing to Toronto in overtime on Tuesday night.

That Tuesday night game saw a few impactful moments for the Sabres; their highly-touted rookie, Mikhail Grigorenko, scored his first goal. (You may remember Grigorenko as the center of an age debate around the draft; him being Russian and all, the Canadian media seemed bound and determined to paint him as being older than he claimed - somehow it worked, and he fell from top-three down to where the Sabres picked him at 12th.) Check out video of his first goal here - granted it's against Toronto, but still pretty nice; he finds the rebound from Mike Weber's shot from the point and just backhands it in through traffic.

The flip side of Grigorenko's success against Toronto was the loss of Patrick Kaleta to a hit by Mike Brown. Kaleta was taken to the hospital to deal with some neck pain; if you watch the video, it appears that Kaleta goes to get the puck along the boards, sees Brown coming, and turns his back to try to draw a hit-from-behind penalty. How...classic Kaleta. The Bruins definitely won't miss him tonight.

The Bruins, meanwhile, are coming off that 2-1 shootout win against New Jersey. They played fairly well against the Devils, maintaining solid offensive zone pressure and quality puck possession numbers. In In Lou We Trust's game recap from the other day, they kindly include Corsi charts; if you're bad at fancy stats like I am, it's still pretty easy to figure out that the differential between shots, blocks, misses, and goals for and against should be a positive number (you want your team to do those things more than you want those things done to your team, obviously.) Here is Boston's chart from the game the other night: 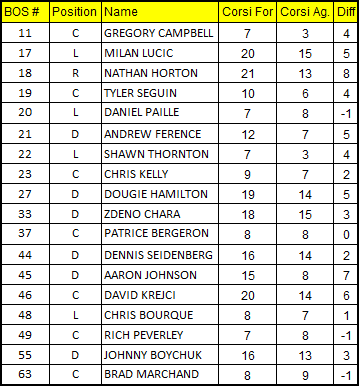 The Bergeron line struggled a little more than most, but considering how good they are on a regular basis, that struggle won't last. Look for them to have a big rebound game.

For all of those saying Lucic "needs to fight Scott," also? Don't be dumb, please. If anyone's going to take on Scott it'll likely be Thornton - but even giving up Thornton for five minutes against the massive pylon that is John Scott is a big mistake.

Bruins will win this one. Buffalo doesn't have the offensive prowess to outduel the Bruins at this point; Tuukka Rask has also been historically excellent at shutting down the Sabres.