Not quite coming in at #1 on our countdown of teams we hate, the Buffalo Sabres fall short as usual.

Share All sharing options for: 29 Teams We Hate: Buffalo Sabres

We've had a lot of feckless, hapless, pitiful teams on this countdown so far. For some organizations, we've struggled to work up enough bile, others we've felt downright bad for picking on the weak.

Buffalo, you pose neither of these problems. Montreal aside, you are the team for whom this series was designed: a shit-hole city that can't buy a title with the handful of shekels it has left from its disintegrating tax base; a team full of useless plugs and sniveling cowards carrying on a fine, longstanding tradition of asshattery; a history of whining and bitching that can only be rivaled by the Canucks' monument-to-butthurt. "The Queen City"? What the hell have you done to earn your regal title? How dare you defile the good name of Freddie Mercury!

It has been a long time since people felt anything about Buffalo’s downtown other than dismay.-The New York Fucking Times, paper of goddamn record

Be ashamed Buffalo, for all that you are. Take Tim Horton, who you drove to kill himself. Ok, he drove himself, but you did the driving to the bottle. Losing to the neighboring godawful Maple Leafs the night before in a gutless effort proved too much for the old man to take, forcing him to pop pills with a vodka chaser. On his way home, he remembered that home was Buffalo and threw himself into a guardrail. In the aftermath, his business partner in matters donut took over sole control and spread far and wide the pox upon the land that is the deceased icon's namesake chain. Sub-par donuts across the country, all because of you Buffalo.

You only got the best player your franchise ever saw because the league FINALLY decided that Montreal couldn't have dibs on everyone from Quebec. (Nice one stealing him from Vancouver, though, kudos on that). As you gorged yourself on further ill-gotten draft spoils of La Belle Provence, you without so much as asking misappropriated the name of a William Friedkin masterpiece and spat on the finest performance of Gene Hackman's career. In return for your temerity, you were unable to generate... much of anything to speak of throughout this era. Some regular season success, and one shining moment with a shot in the dark at the cup.

Nobody's going to begrudge you getting rocked by the Broad Street Bullies in their heyday, but most of their opponents took their licks and didn't have to resort to underhanded tactics to eke out a couple unearned wins in an outmatched series. Really, Buffalo? Fog machines?

AND WHAT DID BATS EVER DO TO YOU!? Ozzy Osbourne blushes at the sight of Lorentz' savagery. No wonder you haven't won shit, that's some bad juju right there. (the Flyers, hardly innocent, haven't won either since the hockey gods decided between the lesser of two evils in this series). A living creature, plucked from this mortal coil with such callous disregard. In so doing, you've disrupted the precious in-arena ecosystem. By making bats fearful to enter NHL arenas you've upset the delicate balance of nature, directly establishing the conditions for TD Garden's overhead camera fly infestation.

If only there were some predator that could take care of this problem. If only the Sabres hadn't come along...

Fortunately for all manner of fauna that might slake your bloodlust, this chiroptera curse has lingered to this day, sending your team wandering through the desert of mediocrity ever since. Even with basically a god behind the bench, the Sabres somehow managed to piss their opportunities down their legs. You were the only team that coaching legend Scotty Bowman couldn't will to at least a Cup Final appearance in his entire career. Hell, he got the freshly expanded BLUES there repeatedly (btw, thanks Scotty!). Every subsequent team? Cup winners...except for you Buffalo, except for you. No, you nearly destroyed the career of a titan of the league, who befell a fate no better than PJ Stock, becoming an analyst for Hockey Night In Canada. And I suppose we can further extend the Bowman-related blame to the Penguins takedowns of Neely's Bruins. If only you hadn't blown so hard, Buffalo, Bowman might have remained, Sisyphean, behind your bench. What could have been.

Ensuing seasons would see you become Montreal and Boston's bitch. If there's one thing I can't fault you for, Buffalo, it's consistency.

Any shining high points from that era? Um... Tom Barrasso was a pretty decent goalie... FOR ME TO PUPPA! 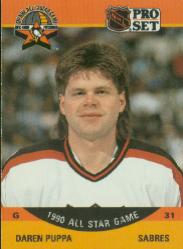 Nope only dark days, as you drove another player to the brink of his grave:

Clink Malarchuk, distraught over his recent trade from Washington to Buffalo, attempts mid-game to commit suicide-by-skate, lunging into the path of an oncoming teammate's upturned blade. Fortunately, emergency crews would save Malarchuk's life, but at what cost? What quality of life would that be: the man would survive, but his career would wither and die in Buffalo just a few short years, just as all others before him. Decades on, while assistant coaching in relative paradise Columbus, the mere thought of his tenure in the "City of Good Neighbors" made him try and eat a bullet.

But it's not all misery, animal sacrifice and bloodletting in your little pit of hockey hell. By the 90s, only a mere 20 years into your existence, you did manage to get past Boston for the first time in... ever.

By the way Rick Jeanneret - he who makes Jack Edwards seem calm, restrained and non-partisan - flipped out over an OT goal in a sweep, you'd think they'd won the Cup for the first time in their measly existence. But no, the Sabres went on to have the favor returned by Montreal on their dick-stomp to glory. That's right, if you needed any more reason to despise this blot on the NHL, by defeating us they took away the only defense standing between the Habs and their solitary modern Cup.

Buffalo would soon have something to cheer about amid its Siberian gloom, a Czech phenom whose heretofore unmatched talents in goal would drag them oh so tantalizingly close to the glittering prize. But as to Hasek's glory, as with all talent in Western New York, hockey or otherwise, it would be squandered. Only this once more would you come so close to tasting the cup. And this time, you'd have a real chance. Ah, but hockey is a game of inches. Or is it feet...

Brett Hull would drive the stake through your dreams, his foot in the paint haunting your nightmares for years to come. "Cheater" you'd call him, the rule soon being struck from the book proof positive of his transgression. "Fraudulent" you'd call the Cup, ruing that fateful day your eminent game 7 victory was ripped from you... wait... that's not how i remember...

IT WASN'T EVEN A GAME 7 YOU WHINING, ENTITLED PRICKS! All that outrage was over the mere chance to push a series to 7. And what in your misbegotten history makes you think that would have turned out any different? Maybe we all would have been better off if you'd just bought it a game later. Maybe your spirits would be crushed for good and we wouldn't have to hear your protestations years on. Maybe that final curb stomp to your hopes would do the trick. But no, on you live with your delusions, wallowing in that persecution complex you just can't help but share with the world. 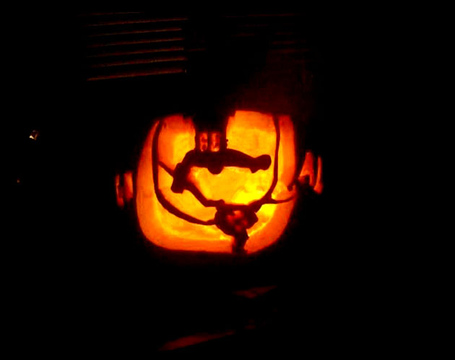 Hasek's career would soon draw to a close, but unlike his predecessors, he managed to flee and taste success with a real organization (with Scotty Bowman, no less). And he got to upgrade his living situation, residing in beautiful Detroit!

Over the next decade, your on-ice product would descend into a shambles yet again, with modest gains merely short lived. Under the whining tutelage of abject coaching failure Lindy Ruff, inexplicably teflon for much of his ineffectual 15 year stint behind the bench, the team would be made in his image: paunchy, balding, dirt-lipped, and bitching at every perceived injustice. Abjectly failing to understand contract negotiation - or merely at the inherent disadvantage of asking players to live in Buffalo - you would lose stars Danny Briere and Chris Drury, goddamn hero Miro Satan, and cheapshotting ginger scum and pretty good puck-mover Brian Campbell while gradually plugging the gaping holes of your roster with a rogue's gallery of shit-weasels - Pat Kaleta, Eric "The Elbow" Boulton, Raffi "Even Elbow-er" Torres, ref abuser Chris Gratton, Steve "Speedbag Face" Ott, "Sir John, Unable to Play Hockey" Scott. And you'd waste 1st round picks on 4th line busts. But at least you got that UFA signing thing down: 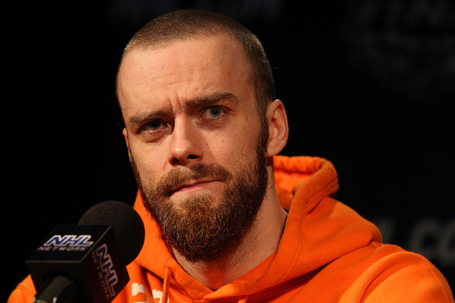 And then there's Thomas Vanek. Fuck him for being good.

You'd think that guiding the failboat across the NHL's high seas for 40 years would give you some idea how to operate a hockey team. Maybe you'd figure out the knuckle dragging hacks weren't the way to go and find some market inefficiency to exploit, some undervalued aspect of the game you could focus on with a dearth of talent. And amid the idiocy surrounding your team your goalie coach would attempt to make sense of all those chunks of rubber hurtling at his charge through your porous defense. That coach's name: Jim C.O.R.S.I. Yes, it was the Buffalo Sabres who ushered in the modern era of statistical analysis and ruined hockey in the process. They're the reason people stopped watching the games in favor of spreadsheets. Emboldened with verifiable, empirical information, bloggers throughout the nation's basements would incessantly challenge sacred notions of heart and grit, favoring statistically recorded performance over things that really matter like clutchness and leadership. Way to go, Buffalo, for making the world safe for a bunch of nerds who never played the game.

(alternate view for you stat folks: You'd think that with their guy behind this whole Corsi thing they'd be better at it. But no, they still thumb their nose at fancy stats. They make Toronto look like the Detroit Red Wings. Probably avoiding possession because they're scared of g-g-ghosts.)

Goddamn it Buffalo, you can't even draft properly without adult supervision: 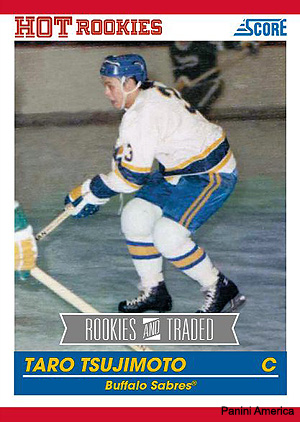 As your on-ice product cratered for the nth time, so too would your ownership. Through the deregulation years of the new century, you laundered the ill-gotten gains for the malevolent cable empire turned mini-Enron, Adelphia. With the Rigas clan thrown in the slammer for corruption, the stinking carcass of your franchise fell to the stewardship of the league before Gary passed the buck to a failed gubernatorial wannabe, tax evader and a willing columnist in sexist shit-rag the Niagara Falls Reporter. The subsequent owner would be caught giving substantial amounts of cash to noted hive of pedophilia and lies, Penn State University. And when Bruins fans can call your ownership dirtbags...

Oh, and need I mention, Jeremy Jacobs is YOUR native son and Delaware North's Death Star headquarters set up shop in YOUR town. Jacobs just owns our team. He owns your damn city. This lockout business is on your hands.