Rich Peverley: Gone, But Not Forgotten

Yeah yeah, Seguin's back in Boston. But more importantly, he brought Rich Peverley with him, who will always be missed by this Bruins fan.

Share All sharing options for: Rich Peverley: Gone, But Not Forgotten

When the Dallas Stars visit TD Garden on Tuesday, all eyes will be on Tyler Seguin.

While this post is not about him because it's been written about to death, let me just say that I'm still not fully on board with the trade. I've heard all the "he'd never become this or that kind of player in Boston" and "his entourage was bringing him down" arguments, and while there's probably be some measure of truth in these lines of thinking, nothing is ever black and white and we just don't know what type of player or what kind of person Seguin may or may not have become as a member of the Bruins.

My biggest beef with the deal is that he's only 21, an age at which one's life and game could go in all kinds of directions. Question his lifestyle choices all you want, but the most important thing is what he does on the ice; there's no denying that he has tremendous talent and upside (he led the Bruins in scoring two years ago, remember?) and there's time to work on the deficiencies in his game (like another jettisoned star has done in Toronto.)

The current window of winning won't be open forever, and I believe Seguin is a player who could have helped the team win now, and could have been a one to build around for a next wave (all talk of him not fitting in the Bruins culture and system aside.)

The fact is, the trade happened, the Bruins seem well positioned to succeed in the here and now while Seguin appears to be on his way to becoming a Stars star, and good on him.

Now, on to tonight's real story.

My appreciation for he who wore #49 grew out of two factors: his trade to the Bruins back in 2011 (obviously), and the fact that he's from the city that I have called home for the past five years. And as I learned more about his hockey story, I grew to be an even bigger fan.

Here's a quick rundown for those who've already forgotten.

A native of Guelph, ON, Peverley took the long road to the NHL. After this good Ontario boy was drafted by the Mississauga Ice Dogs of the OHL during the Don Cherry regime, Peverley decided against the junior hockey route, choosing instead to accept a scholarship at St Lawrence University. There, he led the team in scoring for 3 out of his 4 years. Unfortunately, his collegiate success did not translate into having the Peverley name called on Draft day, forcing him to begin his pro career in the ECHL with the South Carolina Stingers.

In 2005, Peverley made the jump to the AHL’s Milwaukee Admirals, where he posted 168 points (56 G, 112 A) in 176 games. This was enough to convince Milwaukee’s parent club – the Nashville Predators – to offer him an NHL contract, where he would appear in 73 games over the course of 3 seasons (scoring 7 G & 13 A in 73 GP as a Predator.) In January of 2009, Peverley was waived by the Predators, and subsequently claimed by the Atlanta Thrashers organization, a move that proved to be most beneficial.

Peverley proceeded to put up 124 points (49 G, 75 A) in 180 games for Atlanta over three seasons, earning both his first big contract (two-years, $2.6 million), as well as an invite to represent Canada at the 2010 World Championships in Germany.

In February of 2011, Peverley – along with Boris Valabik – was acquired by the Bruins in exchange for Blake Wheeler and Mark Stuart, by no means an insignificant price tag. During his time in Boston, Peverley scored 21 G & 56 A in 127 regular season games for the Bruins, adding 9 G and 10 A in 53 playoff games.

Of those nine, this was probably my favorite.

After winning the Cup that year, he was able to bring the Cup back to Guelph, and this happened. 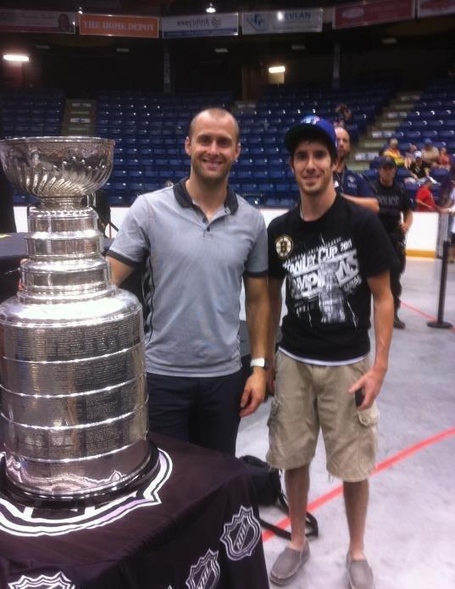 In October of 2011, Peverley signed a three-year, $9.75-million extension with the Bruins, literally weeks after a buddy of mine had been talking about his contract status at a local breakfast joint and Peverley came in a sat down at the table beside us.

This deal may have contributed to him being part of the Seguin package, because, let's be honest, he wasn't great last season and that was a heavy tag in a cap world.

After a concerning heart issue at the beginning of the season, Dallas' new #17 has scored 2 G and 5 A in 13 games, and I, for one, wish him all the best.

For all the talk of players going on to achieve personal success on middling teams, I hope to see another Cup celebration at the Sleeman Centre at some point in the future.