All of the major hockey countries have released their 2014 Olympic jerseys. Who should shut up and take your money, and whose are going to end up in the thrift shop?

Share All sharing options for: Sochi 2014: ranking the Olympic jerseys

The gradual unveilings of Nike's 2014 Olympic jerseys have been widely met with a mixture of sadness, disgust, and anger. Plastic-looking stars? Corporate logo rip-offs? Fake, shiny laces?! WHY?!?!

However, these are the jerseys our countries are stuck with, and are the jerseys that many people will be spending their hard-earned money on. We've seen jerseys from the United States, Canada, Sweden, Finland, Russia, Slovakia, and the Czech Republic, meaning all of the world's hockey powers have unveiled their Olympic gear (Sweden hasn't shown its blue jersey yet, but they've said that they'll play in the gold one as often as possible). 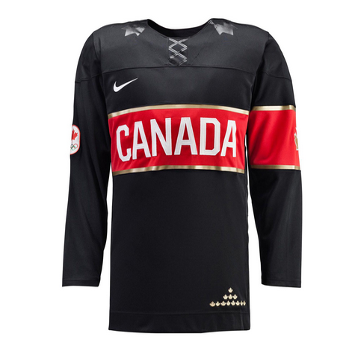 Yikes. While using black as an alternate color is an interesting concept for a Canadian side that has stuck with red and white for years, Nike failed big-time in execution. The red armband brought up some, um..."interesting" comparisons. The pile of golden maple leafs at the bottom seems a bit out of place, and the shiny plastic parts at the top look even worse than usual on a black jersey. 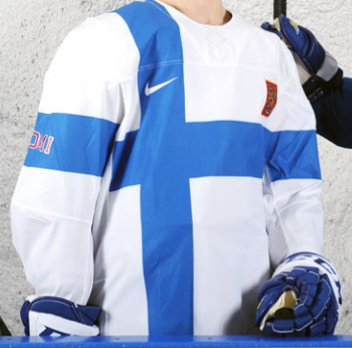 I'm all for national pride, and Finland's jerseys are usually awesome. However, this one is a miss. The Finnish flag could be worn as a jersey, but in this case, it looks like it was too big to fit and instead just got draped over the shoulders. "Sure, that'll do." The crest on the left breast is a nice touch, and the white jersey makes it hard to see the plastic parts. But overall, it looks a little sloppy. 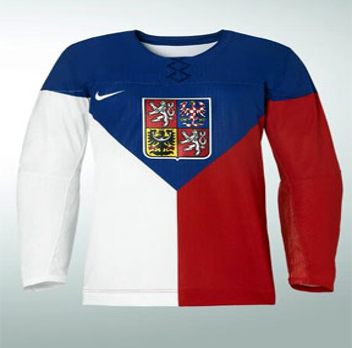 Finland won't be the only team sporting its nation's flag, as the Czechs joined in with a flag-inspired jersey of their own. The colors on this one are nice, but it just seems like a mish-mash, a collision of parts right on the front of the jersey. The color change right down the middle will make the numbers on the back of the jersey look weird, and what colors will the arm numbers be? Red on one side, white on the other? Blue on both? Eek. 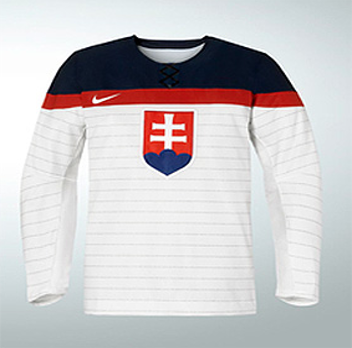 The Slovaks definitely get points for creativity, as using their national anthem as tiny stripes across the jersey is a fresh, new idea. However, it doesn't work very well on the white jersey. It comes off as a white jersey with gray stripes, and looks a little bit like a polo your boss would wear on casual Friday. 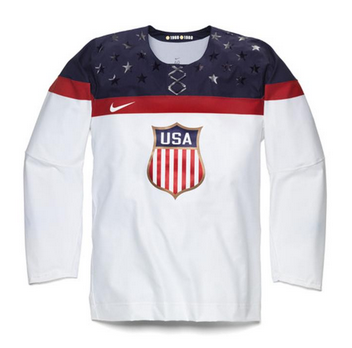 Meh. Kind of bland, nothing too exciting. Due to the lack of any kind of striping along the bottom, the USA's white jersey looks more like a long-sleeved t-shirt or pajama top than a hockey jersey. And the fancy, Lisa Frank-esque stars...why, Nike? Why? 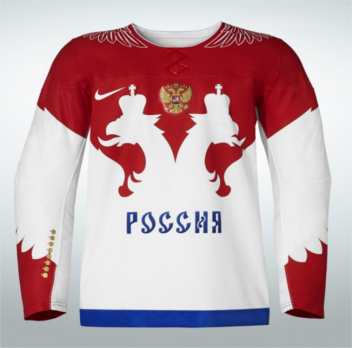 Like the Slovaks, the Russians get points for creativity. Like the Czechs and Finns, the Russians have a little too much going on here. The wings on the shoulders are awesome, as are the small gold crowns on the right sleeve. However, the two-headed dragon/eagle silhouette is too big. It overwhelms the eyes. Had Russia made the crest below the fake laces a bit bigger and scaled down the silhouette, this one would've hit the jackpot. 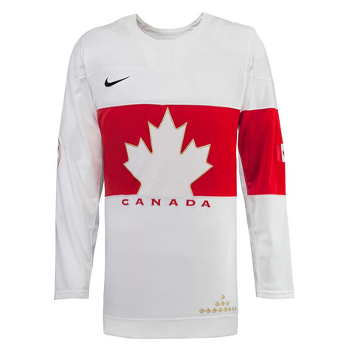 Simple and clean, albeit with a few odd choices. The one red armband looks a bit strange, and the pile of gold at the bottom would be better if centered on the back, below the player's number. However, Canada's bold red stands out well against the white jersey. 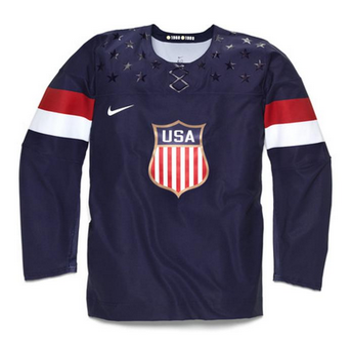 A better effort from Nike, but still kind of uninspiring. If you want a USA jersey (Kessel, anyone?), this is probably your best bet. To be honest, this jersey isn't terrible. It's just plain. When one sees the chances Nike took with countries like Slovakia and Russia, it makes one wonder why the United States' offerings are so bland. Take off the fancy stars on the shoulders and this jersey becomes a lot more palatable. 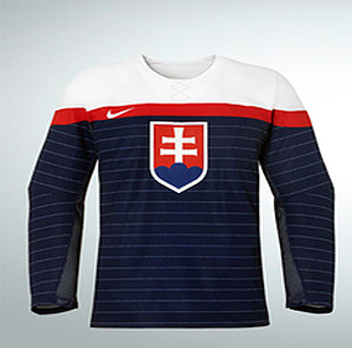 Basically the inverse of number eleven on this list, the Slovaks hit a home run here. The white shoulders hide Nike's garish shiny plastic, while the tiny anthem adds some nice texture to the navy blue torso. The red stripe across the breast and shoulders is a nice contrast between the red and white, and Slovakia's crest is as awesome as usual. 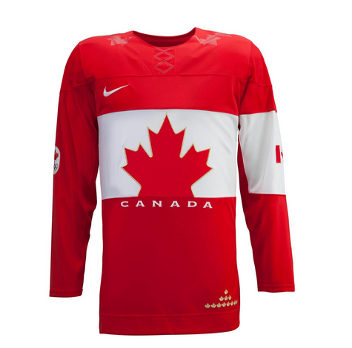 As it turns out, sticking with tradition is Canada's best look. The red and white color combination is as easy on the eyes as ever, and the flag on the left arm is a great touch. The right arm could use a white band, and the shoulders are ruined by the fancy plastic, but overall, this is a sharp looking jersey from our pals to the north. 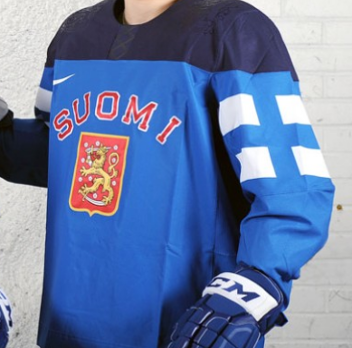 A much better offering here from the Finns. They stuck with the "Suomi" logo and lion crest that they've used in recent years, and added some flag pride on each arm. The darker shoulders are a nice point of contrast as well. Those looking for a Tuukka Rask jersey will be happy with this choice. 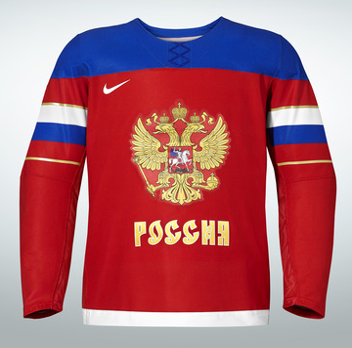 No, the host's home jersey isn't anything crazy or new. However, it's a fantastic look. The bold red main color is accented well by the gold piping. Russia's national colors are awesome as armbands (and hey, Nike used two this time!). The crest looks great, the white stripe at the bottom is a nice visual end point, and the shoulders are a great way to break up the red. Alex Ovechkin and company will look great flying around Sochi in these. 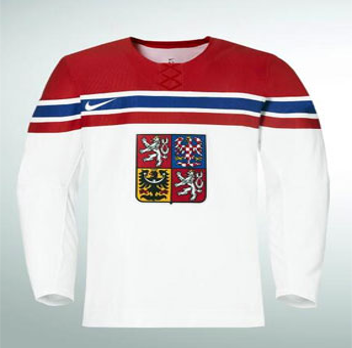 Clean and crisp, this Czech jersey looks fantastic. While some striping on the bottom half of the jersey would've been nice, the color scheme used on the shoulders is great. The Czech crest stands out well against the white background, and the white space between the colors on the shoulders is enough of a contrast to make the blues and reds really pop. Throw a "Krejci" on this one and give yourself early Christmas present.

Keep it simple, stupid. The Swedes barely changed a thing from their jerseys they've been wearing for years, someone keeping Nike's influence to a minimum. Awesome "Tre Kronor" logo? Check. Classic gold and blue color scheme? Check. The only thing Nike added was the fancy plastic viking ship on the shoulders, and that won't be terribly visible. The Swedes stuck to their roots, and in doing so rose to the top of this list.