I have pictoral evidence. Seriously.

Share All sharing options for: Why Prince Edward Island is better than Nova Scotia in every way

Over the President's Day weekend, Cornelius and I had the opportunity to take a fun little trip. Between Friday and Sunday, we attended three Halifax Mooseheads games; two in Halifax, Nova Scotia and one in Charlottetown, PEI. It was really cool. The Mooseheads are stacked. Jonathan Drouin is mindblowingly good.

One thing we didn't really anticipate about this trip, though, was the fact that we were getting to visit the hometowns of two of everyone's favorite Bruins players: Adam McQuaid (PEI) and Brad Marchand (Halifax)! We didn't think much of it until we got to the Halifax Metro Centre and realized it was the home of the Nova Scotia Sport Hall of Fame. Well. 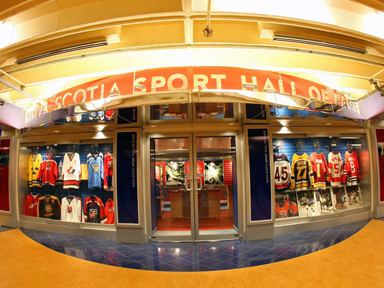 So we headed over, and the first thing we see is NOT a Brad Marchand Stanley Cup Champs photo, or jersey, or anything....it's this. 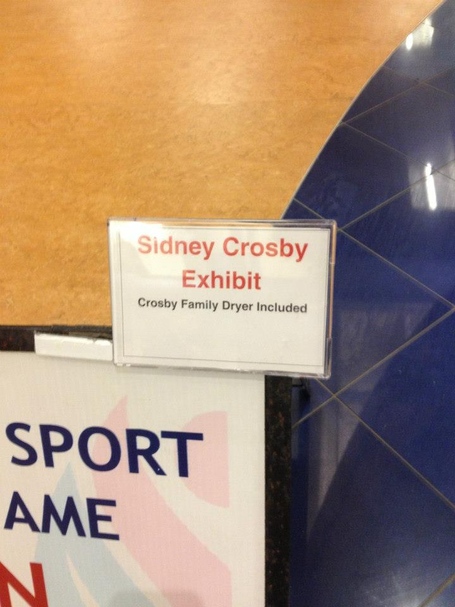 Oh right, that guy's from Halifax, too. (And yeah, here's the dryer. It's really bizarre that they have that.)

So we walk through the Hall of Fame, whatever, they've got some stuff up about Glen Murray and about half the hall is Sidney Crosby stuff, whatever whatever. There's literally no Brad Marchand ANYTHING, anywhere. We figured maybe they just hadn't had time to update the place to reflect his amazingness (things move slower in Canada, ok?) but on the way out, tucked away near the exit by some other sports paraphernalia, we found this: 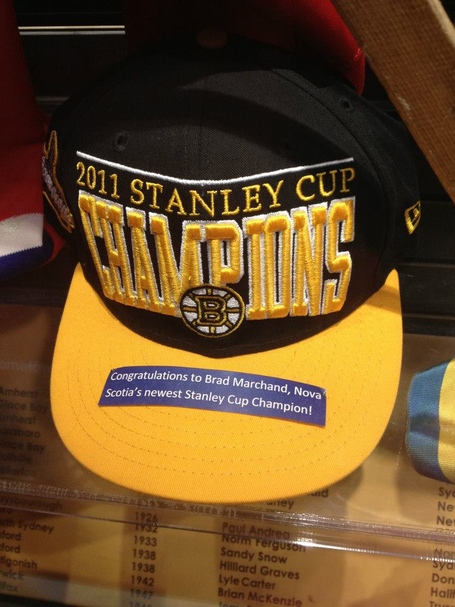 Yeah. No photo of Marchand with the Cup, no actual gear of Marchand's, just a generic flat-brimmed bro hat with a little cardboard label on it. Considering that they managed to acquire the Crosby family DRYER, you'd think they'd be able to put in a little more effort for a guy who's won the Stanley Cup more recently than four years ago.

From there, we headed north over the Confederation Bridge to the sleepy little city of Charlottetown, PEI - home of our very own Adam McQuaid. After watching some P.E.I Rocket hockey for a little while, we realized that the Charlottetown Civic Centre (a tiny affair that holds a whopping 3,700 people!) had its own little local hockey hall of fame. So we checked it out. Immediately upon entering, things already looked more promising than they had in Halifax: 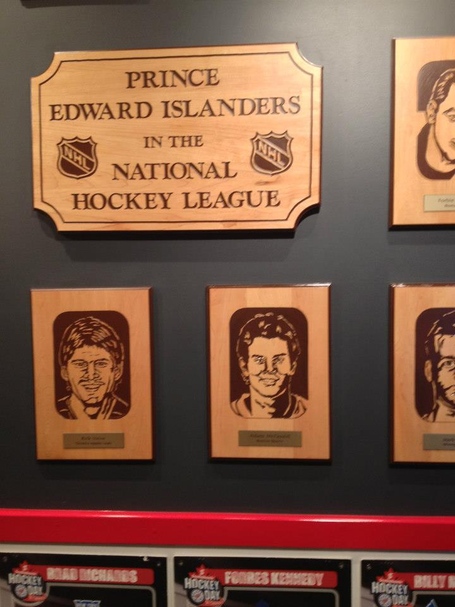 (McQuaid's on the right, in case the woodcut isn't obvious enough.) We walked around the corner, past the giant display of Brad Richards jerseys, and what did we find? 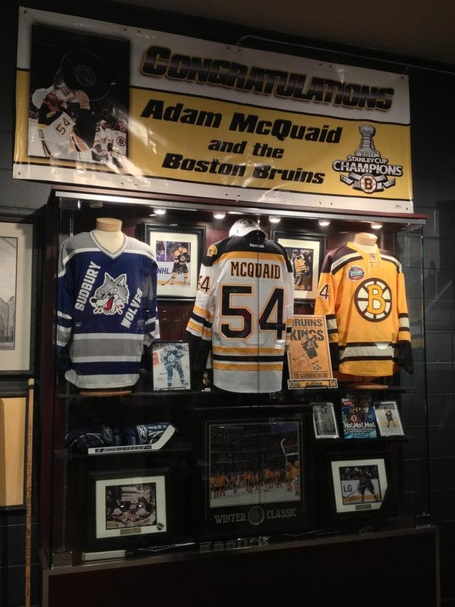 Wow, PEI. Wow. you definitely outdid yourself. A ton of signed photos, including Stanley Cup, childhood, and OHL pictures; a Sudbury Wolves McQuaid jersey; a copy of the Sports Illustrated with Marchand, Tyler Seguin, and McQuaid riding in a sleigh holding the Cup. (Where's YOUR copy of that edition of SI for Kids, Halifax? Yeah. That's what I thought.) That is an awesome tribute to PEI's most recent Stanley Cup Champion and Charlottetown should be commended for epically strong work done. Suck it, Halifax. Prince Edward Island has you beat.