A bad goal here and there and a couple blown leads, suddenly the fan base is questioning one of the best goalies in the league. Are they justified? Is Tuukka coming through when it matters most?

Share All sharing options for: The Numbers Game: Is Tuukka Rask "Clutch"?

In light of the recent late-game collapses, a good portion of the team has been called into question but none more vociferously than newly minted starting goaltender Tuukka Rask. Spoiled by an historic performance out of Tim Thomas and consistently top-of-league outings in recent years, Bruins fans - strange though it may seem to those that recall the darker days of the 90s - have come to expect elite level netminding between their pipes. Not just consistent, but game-saving highlight reel goaltending.

So by some unholy union of astronomical expectations and confirmation bias, Tuukka has come to be a whipping boy in this recent skid, with his "clutch" play called into question from corners of the twitterverse, blogosphere and radiodrome. Which is a load of total horseshit. Here's why:

First, lets look at the obvious. Walk on over to NHL.com and lo and behold: 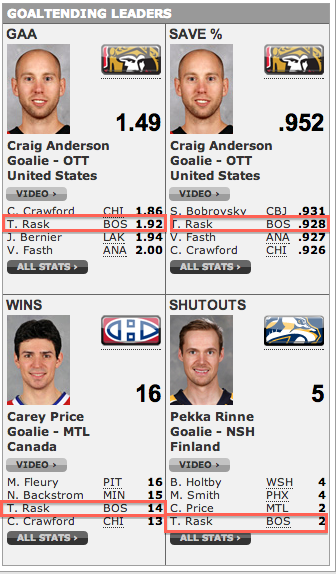 Rask's name sits at #3 in both SV% and GAA. Fourth in wins, in spite of handing a decent load of 8 games to his backup. In a massive tie for fourth in shutouts, for what two goalless performances may be worth. Yet somehow outperforming everything but Craig Anderson's absurdly unsustainable start isn't good enough for Bruins fans. Oh no! He didn't make a save in that game that one time!

STRENGTH AT EVEN STRENGTH

So maybe you'd like me to turn to his even strength performance and cut out the influence of our PK from the picture in case it's propping up Rask's numbers. Ok, I'll humor you though I prefer not to toss out data when the sample's already quite small, and ESSV has been shown to hold no more predictive power than total SV%

Just by glancing, I can allay that concern: his ESSV is actually slightly higher than his SV, at .929 to .928. While there appears to be a short list ahead of Rask at even strength, most are in rather small samples. Only four guys who have seen as many games as Rask precede him in this metric. He's tied with Carey Price and just trailing Lundqvist. Pretty "elite" company, no?

With limited metrics to measure goaltending, how else can we scrutinize the crap out of Rask? One concept, borrowed from baseball, is to gauge consistency by looking at game-to-game performance relative to league average. Quality Start percentage does just this, showing how many of a given goaltender's games outperform the mean. For reference, this year's league average SV% is .909, so games played at or below will not be included in a player's QS%

In the past, Rask has faired poorly in this measure, managing just 46% in 10/11 and improving only modestly in 11/12 to 54%. As Robert Vollman cautions in a Hockey Prospectus article this offseason:

Backup goalie statistics are perhaps more volatile than starting goalies due to their smaller sample size, but the Bruins ought to be very careful with Tuukka Rask as their starter this year just in case there's some substance behind the apparent and troubling lack of consistency brought to light by his Quality Start percentage.

Uh oh. Is this the smoking gun that proves the haters right?

Of all the leaders in the above stats, Rask only trails Anderson in his consistent, keep-you-in-the-game performance, providing a rock steady 71% of games above mean. Unlike others on the board, he doesn't have strong performances covering up bad ones comprising his overall stats. He's just always good. A bit further down the list Lehtonen and Schneider also breach .600, but nobody else comes close to 70%. He's in a class by himself at his number of games played.

But while consistently excellent performance is nice and all, what's it worth if he's consistent in all but the critical moment? Right?! Well, in his mere 41 goals against over 21 games - that means just two goals needed to win for those counting - he's allowed only 22% in the third period. Just 9 tallies.

Pretty good, but that sounds kinda high right? It's almost double digits and nearly a quarter of his goals in... less than a third of his time on the ice... Uh oh, I feel a table coming on:

It just so happens that Rask once again finds himself in rarified air. His GA/G limited to the third comes in second and his percentage of GA in the period lands him best in the league.There is quite simply no better third period goaltender in the league. At all. Period. Everyone else lets in either a higher number in the third than at other times of the game or more altogether. And outside of Anderson, both.

But what of SV%? Joe McDonald at ESPN Boston parroted an Elias Sports Bureau stat that depicted the Bruins as one of the worst third period teams over the last 7 games. Well, first allow me to scoff at the selective and itty bitty sample size. We can make anything look bad if we cherry pick enough. I was unable to find splits of 3rd Period SV% and short of manually tallying each opponent's game summaries I'm unable to provide a table like the above to smack this down with extreme prejudice, but Rask's number alone can do the talking. He sits at a .949 in the third, better than his total by a good margin and approaching Tim Thomas level godliness. In fact, he's had third period shut-outs in 75% of his games, giving up goals in only five outings. Hand sampling some other key competitors, Crawford has had 8 while Lundqvist has given up third period goals in 13 games. Viktor Fasth-in-the-pan does have only 5... but in 7 fewer starts. Other close rivals Bobrovsky and Lehtonen gave up at least one goal in the final period in their first six outings. So I'd say Rask's his 3rdQS% is pretty solid. One might say: clutch.

So here we have one of the league leaders in GAA, SV% and Wins, who is exceedingly consistent in maintaining these impressive performance levels and who comes through in the final frame more than anybody else in the league. What the hell does it take to please you damn people!? I guess we should trade for Brodeur so he can score goals too!

For those of you out there somehow getting it in your misguided minds that Khudobin's been or is becoming the better goalie, a few things to chew on: he has a lower GAA and SV%, lower ESSV, lower QS%, higher 3rd Period GAA share AND raw 3rd period GA in fewer games. Don't get me wrong, he's been a stellar backup. But if you think Khudobin getting a W last night in the absence of a pissed-away lead means goalie controversy in Boston, just dope slap yourself on my behalf.