If you don't love to hate these guys, there's something wrong with you.

The Other Side's SB Nation Site (Needs no introduction, but): Eyes On The Prize

So this is going to be a fun one. After allowing a touchdown last night against the Penguins, Carey Price is getting the hook today - in favor of Peter Budaj. Last night's game was pretty hilarious - in the battle of Price vs. Tomas Vokoun, Vokoun only just barely came out on top.

The Habs' lines have shuffled a bit since last we saw this team; the addition of Michael Ryder and the loss of Rene Bourque to injury has made those changes necessary. Look for old friend Ryder to skate with youngsters Lars Eller and Alex Galchenyuk.

Meanwhile, this is the state of affairs over at Eyes on the Prize. How flattering: they compare their young rookies to two of our players. You just hate us 'cause you ain't us, Habs fans. it's okay. You can admit it. 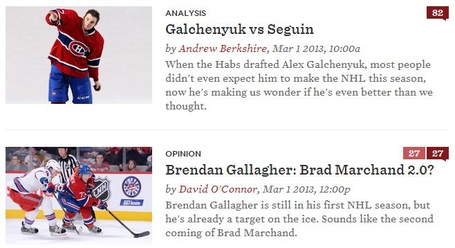 On the Bruins' side of things, looks like those bottom two lines could start changing pretty regularly. Daniel Paille seems to have become a permanent fixture on the third line. After seemingly taking Servo's advice and scratching Shawn Thornton for a game, it seems Claude has opted to scratch Chris Bourque today instead. Campbell will center Thornton and Jay Pandolfo.