Monday Morning Skate: Congratulations, Taylor Hall! You Made it to April!

Share All sharing options for: Monday Morning Skate: Congratulations, Taylor Hall! You Made it to April!

Tonight, at 9:30 pm in the one true time zone, Taylor Hall will achieve another milestone that Tyler Seguin has so far left him in the dust on: Playing NHL games in April. Yep. Just looks at this Career Split chart. 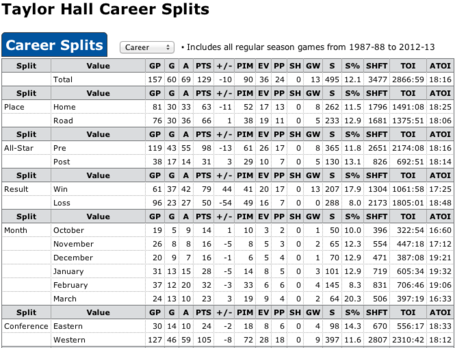 Under April, there's a whole lotta nothing. And how much of March was taken up by this year? 14 games. Over half of Taylor Hall's March games have been this year. He went 8-9-17 in 14 games this year. By simple math, he's 5-1-6 in 10 games the previous 2 years. But yeah, games in April. What a milestone for the young player. I wonder how other high picks in that draft have done...ah, I'm sure it's irrelevant anyhow.

The morning after a win is always sweet, and today no less than any other.

Welcome to a new month. What's on tap, y'all?