Why a lack of revenge is OK, and even the right thing to do

The Bruins are being criticized by many for not responding with their fists after New Jersey's Anton Volchenkov leveled Brad Marchand with a dirty elbow. But the criticism is off-base: not only is the Bruins' lack of a response OK, it was the smart thing to do.

Share All sharing options for: Why a lack of revenge is OK, and even the right thing to do

Love and fear are the two strongest human emotions, but skating right there with them on Team Feelings' top line would be anger. Anger is unpredictable and hard to control, and is arguably the rawest emotion of them all.

With anger comes the desire for revenge, and that bloodlust was on full display in the aftermath of last night's 5-3 win over the New Jersey Devils. The most-discussed part of last night's game was the Anton Volchenkov elbow that felled Brad Marchand, sidelining the Bruins' leading scorer with a probable concussion.

The reaction to the hit was nearly unanimous: a dirty play, the kind of hit the league is trying to get out of the game, no respect, suspendable offense, etc. The reaction to the aftermath, however, varied wildly, and is where the anger and desire for revenge really kicked in.

Fans and media members alike quickly took to Twitter to voice their displeasure at the Bruins' "lack of response" following the elbow. People were mad that no one pounded on Volchenkov, then they were mad that no one took revenge on a Devil, as if slugging Adam Henrique would somehow magically heal Marchand. People were incensed that Jaromir Jagr, the newest Bruin on the ice, was the only one who offered a shove in Volchenkov's direction.

"The Bruins are spineless," they cried. "Where's the grit?! Where's the toughness?!"

In a similar situation a few weeks back, the Bruins did respond with fight and toughness: captain Zdeno Chara took offense to an Alexei Emelin cheapshot on Tyler Seguin, chased him down, administered a beating, and was widely praised and showered with adulation from all corners of the fanbase and media.

What? What do you mean that's not how it happened?

Chara was criticized by many armchair analysts for taking a penalty to administer justice on Emelin in a game the Bruins went on to lose. People questioned his leadership, his mental capacity, and even whether or not he should sport the "C" after such a display. Chara sated fans' desires for blood, and somehow did the wrong thing. The Bruins on the ice last night did the opposite, and somehow did the wrong thing as well.

It's easy to understand why fans would want revenge: it's natural to want payback after seeing a star player on the hometown team go down due to a cheapshot. But what's natural isn't always practical, and that's where this morning's criticism of last night's goings-on misses the mark. 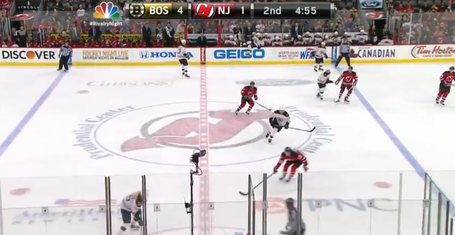 Upon review of the video (and the image above, which shows the beginning of the sequence), the play in question starts with a faceoff, won by the Bruins. Zdeno Chara sends the puck cross-ice to Johnny Boychuk and heads to the bench, while Boychuk fires it in, setting the whole sequence in motion. Volchenkov hits Marchand, and Jagr comes over and gives him a shove. Boychuk is way out at the blue line, so he's out of the scrum. The defenseman replacing Chara hasn't come on the ice yet. Marchand is down. Gregory Campbell was looking at the puck, seemingly unaware that Marchand was even injured.

That leaves Jagr as the only Bruin on the ice who actually witnessed the hit, and lo and behold, he's the one who got in Volchenkov's face. It was an appropriate, practical response by the entire team. This was not David Krejci getting concussed by goon Adam Mair in his first NHL game while the 06-07 Bruins stood around whistling and twiddling their thumbs (that remains one of the worst team responses in recent memory); this was one player down, three out of the play, and one who took action.

It took the officials four seconds (literally) from the time of the hit to get to Volchenkov. Two seconds later, they were already escorting him off the ice.

What did the bloodthirsty fans expect the Bruins to do? Storm the Devils' locker room like a medieval fortress and carry off Volchenkov to be burnt at the stake?

Pounding on Volchenkov wouldn't have solved any problems: Marchand wouldn't have been magically healed, and the Bruins wouldn't have gotten a goal for it. Truthfully, the best way to punish Volchenkov was to stay focused and beat his team, and the B's (barely) did that, keeping the Devils in their current free-fall.

Revenge in hockey is a lot like revenge in other aspects of life: better in theory than it is in practice. Sure, a man getting back at the guy who cut him off in traffic by catching up to him, cutting him off, and sending him spinning into the guardrail is great in the action movie theater of the mind; in practice, it's nuts. It's similarly nuts to expect the Bruins to have done anything differently last night: are they really supposed to pass up an extended power play in a game that could give them the lead in the Northeast Division for a few jabs at an already-ejected player?

No, of course not. And what if, say, Johnny Boychuk had come careening into the pile, taken out Volchenkov, negated the Bruins' power play, and the B's somehow lost the game? Would he have been patted on the back for doing the right thing? Unlikely.

The Bruins can (and should) be criticized for a lot of things last night: taking so many penalties, nearly blowing a 4-0 lead, disappearing for large stretches of the game (ahem, Messrs. Lucic and Horton), etc.

But to call the team spineless or cowardly for not getting even with their fists after Volchenkov's misdeed is off-base. The team did, in fact, take action: they kept their heads and won the game. While the mature route isn't as fun or as immediately satisfying as the primal revenge route, it's usually far more painful for the target.