The Most Heroic Bruins of the Last 10 Years: Round 4

We've made it to the fourth round of the Heroic Bruins bracket, and only eight players, each a legend of immense stature in his own right, remain. Who will advance to the last four? You decide.

Share All sharing options for: The Most Heroic Bruins of the Last 10 Years: Round 4 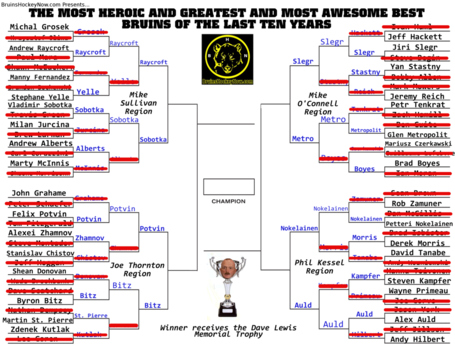 The original field of 64 legends has been pared down to eight, with 56 skaters going the way of Dave Lewis: sent packing, probably to Belarus.

We've reached the regional finals, and the winners will advance to the FleetCenter Four. As was the case in prior rounds, who moves on will be determined by user vote. Vote early, vote often, vote by tomorrow morning, because the votes will be tallied tomorrow at noon.

Link to the fourth round ballot.

If one were to base this solely on who each player turned into, it'd be Tuukka Rask vs. David Warsofsky. If that's the case, Raycroft's margin of victory will be bigger than his GAA as a Maple Leaf. However, if one votes based on Bruin achievements, it gets ugly in a hurry. Raycroft backstopped the 2003-2004 Bruins to a first round loss to Montreal, and was awarded with the Calder Trophy for his efforts. His biggest contribution to the Bruins is sucking badly enough that Tim Thomas got a shot. Sobotka? He was named the first Peter Chiarelli Wrecking Ball award winner, was a noted fighter of Buffalo Sabres, sported pink hair like only Vladimir Sobotka could, and once dressed as Tinky Winky for Halloween.

Felix Potvin's run through this bracket has been something of a surprise: while he had a fantastic NHL career, he only played in 28 games for the Bruins, mostly backing up Raycroft. It's safe to assume that his run can be attributed to his name being Felix, which is awesome; however, he's running into another excellent name in this round: Byron. Perhaps the second most famous Byron in Bruins history, Byron Bitz burst onto the scene in 2008-2009 and was quickly adopted as a cult hero. Why? No one knows. He was a big guy and kind of slow. But he tried hard, fought people like Donald Brashear, and was named Byron. What's not to love. Bitz cemented his legend status in February of 2009, when he scored two goals against the Florida Panthers and the Garden crowd called for him to be put back on the ice late in the third so he could have a shot at a hat trick. And thus, the Legend of Bitz was born.

These two have left some big names in their wake, including Brad Boyes, Yan Stastny and Jeff Hackett, but Glen Metropolit will be forever known as "He Who Slayed TENKRAT." Metropolit was a spark plug on the lovable 2007-2008 Bruins team that pushed Montreal to seven games. He was frequently the subject of newspaper columns and news reports, as he overcame a rough Toronto upbringing to carve out a nice NHL career. Jiri Slegr? He was inarguably the greatest Czech to ever play the game, and the man who saved the turtleneck from fashion obscurity. After his playing career ended, did Slegr put on a more casual turtleneck and rest on his laurels? No, he got himself voted into Czech Parliament. Look for "Slegr: From Pucks to Politics" in theaters in 2014.

Two more legends of the 2007-2008 Bruins, these guys filled important roles: Nokelainen was the token "name that was hard for visiting commentators to pronounce," while Auld's bald head served as a lighthouse of sorts, beaconing the players towards the correct door for line changes. Nokelainen netted two assists in the 2007-2008 playoffs, but his most notable Bruin achievement was his steamrolling of Marek Malik and subsequent fight with Chris Drury. Once he got going, the Nokamotive was hard to stop.

Click here to vote in the fourth round of the bracket. Voting ends tomorrow at noon!