The Numbers Game: Why Jagr is Better than Iginla

Yes, you read that right: thanks to having a blockbuster deadline deal blow up in their faces, the Bruins landed a forward more likely to impact the team.

Share All sharing options for: The Numbers Game: Why Jagr is Better than Iginla

Sure, "sour grapes" I bet you're thinking. Just some Boston fan still fuming about the Iginla debacle.

Yeah, it still stings. But it just got a lot less painful as the Bruins acquired a higher-performing forward who happens to be better suited to their deficiencies. Let's take a look shall we?

LET ME COUNT THE WAYS

First up, the counting stats

Pretty self explanatory here. Jagr's producing at a .76 pts/G and Iginla at a .69 pts/G rate, so marginal point to Jagr here. On the powerplay Jagr wins again, most importantly scoring more goals himself by a good margin, and more than the Bruins current two best combined. He shoots a little less, but converts more frequently. Career, Jagr clicks at a 14% rate to Iginla's 13.1% rate - Iggy might get a little bounce up to his average, as might Jagr fall a touch, but neither enough to make a tremendous difference to their stats.

SCORING AT THE DEADLINE

So with Jagr coming out on top of counting stats, I guess we could call it a day if that's what matters to you but lets dig a bit more. In terms of even strength efficiency, it's a fairly dead heat with Jagr once gain coming out on top - 1.84 to 1.82. Not a difference you'd notice over the course of an entire season or even two. It should however be noted that expecting Iginla to continue to produce - in overall points - as he did in Calgary is folly. He skates a full minute more at even strength than anyone on the Bruins, and Julien isn't about to change the entire way he rolls out his lines for one incoming player. Jagr's existing usage is much more in line with how Claude operates, and I expect him to return to the 12-13minutes ES he received in Philadelphia under this coach. So I'd anticipate Jagr's output to be fairly predictive while Iginla's would have likely dropped due to reduced usage and the media would be running him out of town.

As far as impact on his linemates, Iginla clearly elevates Tangauy's output but Camalleri has performed better on his own devices. Jagr on the other hand has lifted Benn and Morrow out of the scoring gutter this year, with both players seeing on-ice scoring drop off by half away from their Czech liney.

On the powerplay... well I'll let you guess?

Did you guess Jagr? Well aren't you smart! Another win for the man with the mullet, 3.88 to 3.12, with Jagr getting the lion's share from goals. Iginla's been no slouch, but he's a bit less of a finisher, more of an even balance of scorer and setup man probably by necessity of the tool kit in Calgary. If we glance back a year to get a little bit larger sample, the margins remain about the same between these two players.

How about the PK? Who cares, we're the Bruins. We've got that covered.

Ok, so we've established that we've got a little bit of an edge in scoring with Jagr and filled the greater need on our PP. The best is yet to come.

Above you see the player usage charts for the Stars on the left and Penguins on the right (click for larger or visit the site and monkey around yourself). I've elected to show Relative stats (Corsi and QoC) since we're comparing across teams and don't want to make false assumptions based on the different competition involved. This depiction is kind to Iginla, who has a negative raw Corsi ON, but I don't want to overly fault him for playing on the worse team. He's managed to maintain middle of the pack Corsi relative to the rest of his team this year. So hey, not bad! But no, he's not the big blue dot. He's the itty bitty one stashed next to Crosby.

So good for Iggy, he's not a liability. On the other hand, Jagr in Dallas as well as Philly was a leader on his team, the absolute top possession driver for both teams in Corsi On. Both players are facing positive Relative QoC, so it makes for fairly direct comparison this year.

Prior years don't look favorably on Iginla, particularly when his QoC rises. We're fortunate to see Jagr in two different recent scenarios and have the perception of his puck possession play borne out in both cases. Iginla may be a changed man with some fresh scenery, but nothing about his play in Calgary suggests he'll be the man to move the needle.

So in other words, you're better off with Jagr on the ice than not, by a lot. The difference when not limited to Tied is astronomical. You can take a look at Iginla's numbers if you want, but you may want to avert your eyes. 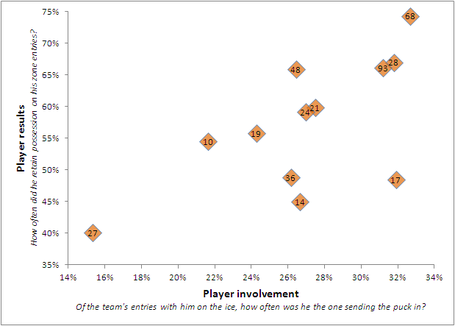 How about them zone entries? Taken from Eric T at BSH's research for the Sloan Sports Analytics Conference this past year (sticktap to BSH user PursuitofLappyness), the above is a chart of zone entries with players' attempts plotted on the bottom as a percentage of team totals and successful entry charted on the vertical axis. Check out who sits numero uno in that upper right hand corner, best in team with the Flyers. Your eyes don't deceive you, Jagr both leads the team in attempts and has an off the charts 75% success rate. 75% of the time he works every time. This no doubt contributes to his Corsi numbers and will be a significant help to an ailing powerplay that experiences difficulty gaining the line.

(In deference to the competition, the Flames were not a subject of this hand-tracked survey, so no data is available on Iginla's performance, though correlation to Corsi here among several players might suggest Iginla isn't a comparable)

Iginla does get a significant edge in middle-names/60 though.

So where should we stick this newfound toy? The first instinct of most fans I'd assume is to shove him on a line with his countryman David Krejci and shift Horton down to line three. All well and good, though I think you'd be missing an opportunity to address a relative deficiency. The puck possession performance is fairly stratified, with Bergeron's crew putting up league-leading numbers, followed by Krejci's bunch in solidly positive-teens territory. The third line, disaster that it's been from a scoring perspective, hasn't been horrible at keeping play going but it could stand to be improved. Adding Jagr to the wing addresses both issues, and combining him with a faceoff Jedi in Peverley could give opposing lines fits.

Though this may be my preference, I'll not deny the potential scoring advantage to having him on the putative first line given Claude's habit of sheltering the wingers on that unit and giving them friendlier zone starts, but I think it may be a waste of his talents and one of the key elements he brings.

Excellent addition aside, the best part: this is a true rental that doesn't carry the threat of a 35+ deal albatross hanging around it. So let's enjoy us some Jagr for the remainder of the year and send him off with some hardware. It worked out well for the last old dude.

Jaromir Jagr traded to Boston for Lane MacDermid, Cody Payne, and a Pick