Share All sharing options for: Wade Redden a Boston Bruin. No, Really.

Well, it's true. The Bruins traded a draft pick of some sort to St. Louis for blueline depth. That depth is named Wade Redden, which is hilarious for a number of reasons but mostly they boil down to "lol Ottawa." Redden has played well in sheltered minutes in St. Louis: 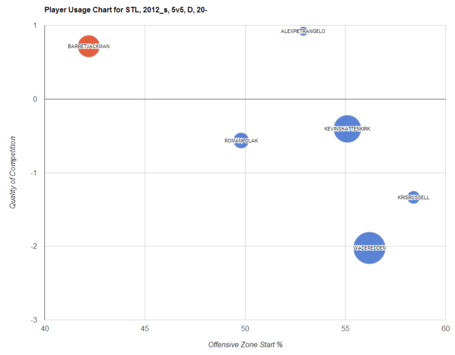 See that blue bubble at the bottom left? He's not playing tough competition or in the defensive zone but he's sure making the most of it. Here are some other stats:

So that's not as super, but whatever. He's probably better than Aaron Johnson, and we're only losing a pick next year for him.

Jaromir Jagr traded to Boston for Lane MacDermid, Cody Payne, and a Pick