Get to know a dumb jerk Leaf: Mikhail Grabovski

In the latest installment of "Get to know a dumb jerk Leaf," learn more about Belarusian winger Mikhail Grabovski, hard-nosed forward and hater of pineapples.

Share All sharing options for: Get to know a dumb jerk Leaf: Mikhail Grabovski

The Leafs have their share of big-name forwards who garner most of the hype and attention, namely Phil Kessel, James van Riemsdyk, and Nazem Kadri.

And then there's Mikhail Grabovski, born in Germany, raised in Belarus, and preparing for post-hockey life as an action movie star.

Grabovski won't grab as many headlines as Kessel, nor will he beg a female fan to not share his email address with the Internet like Joffrey Lupul. But Grabovski is a hard-nosed player, and a pretty tough guy.

To wit, watch as he receives a probable concussion on a hit from Zdeno Chara. Twice. In the same game.

After that second hit, he looked like a tree getting cut down. Timberrrrrrrrrrrrrrrr. How did he respond?

Yes, by scoring the game-winning goal later in the third period (his second goal of the game). Clearly he's some kind of Belarusian man/machine hybrid.

Against the Bruins, Grabovski has recorded 19 points in 31 games, including 10 points in 15 games at the Garden. Here is his usage chart. As you can see, he gets pretty big minutes against high quality of competition, and does pretty well at it. He also takes a big amount of defensive zone starts, moreso than anyone but Nikolai Kulemin (big red dot above Grabbo) and Jay McClement (red dot off to the left). Statistically, this has been a bit of a down year for Grabovski, who had 23 goals and 28 assists for the Leafs last season. 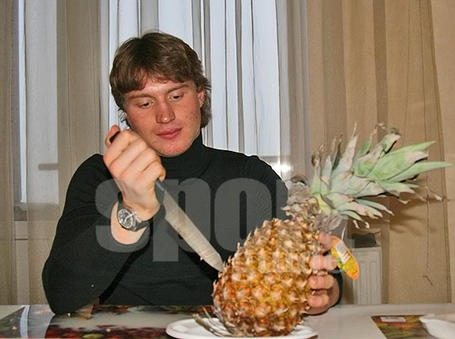 The man is a menace, and must be stopped.

The Bottom Line: There's a decent chance that this series may come down to secondary scoring. Ideally, the Bruins will use their top defense pair (and maybe their top defensive forward trio, when possible) to neutralize Kessel, Kadri, and van Riemsdyk. If that's the case, the second-tier scorers like Grabovski become immensely important. This stands to be a physical series, and guys like Grabovski, who can not only take the punishment, but can thrive on it, will stand out. Grabovski has the skills and grit necessary to be a difference-maker in this series. It's up to the Bruins to make sure that they don't play the role of the pineapple.