Huge performances in Andrew Raycroft's career as a Leaf

There has been a lot of buzz about Tuukka Rask's play in Games 3 and 4, and rightly so: 90 saves in two games is pretty impressive. However, in the interest of fairness, here's a look at some of the inspired performances the man who was traded for Rask, Andrew Raycroft, had during his time with the Maple Leafs.

Share All sharing options for: Huge performances in Andrew Raycroft's career as a Leaf

Raycroft nearly makes a save against Montreal 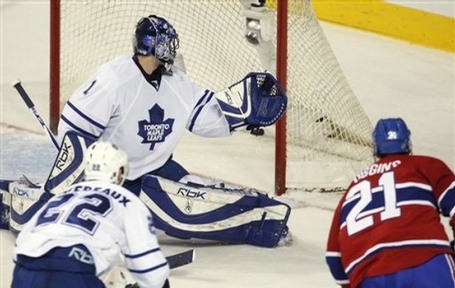 Here's Andrew Raycroft nearly making a save on Chris Higgins a few years ago. As you can see, his glove was up and he was ready, but he missed it by this much. Great effort though.

Raycroft nearly makes it through an entire game without dozing off

This was a heroic effort indeed. Serving as the Leafs' back-up, Raycroft nearly made it through an entire Leafs game without falling asleep. However, a few seconds of weakness got to him, and his valiant attempt came up short. It happens to the best of us.

Ever the innovator, here Raycroft was a true pioneer: he invented the Maple Leaf goalie art form of giving up long-distance goals, a practice perfected in later years by Vesa Toskala. Raycroft's gift to the Leafs won't soon be forgotten.

In this situation, the odds were against Rayzor from the start. He was just one man, a simple goalie, staring down a monstrous challenge: stopping famed breakaway wizard Sheldon Souray in the shootout. Raycroft's effort was nothing short of spectacular, sprawling out with no regard for his own personal safety. But alas, it wasn't meant to be. Fear not, Raycroft. You're not the only one who fell victim to Souray's prowess in the shootout.

Raycroft came into the game with the Leafs trailing the Canucks, 3-0. How did he respond? By saving every Canuck shot for the rest of the night. He held down the fort while Toronto mounted a furious comeback and eventually beat the Canucks, 5-3. It was a game for the ages, and was one of Raycroft's finest moments in Toronto. Wait, what do you mean he was playing for the Canucks in that game? Oh. Well it was still one of his finest moments in Toronto.