Phunwin looks back at the Bruins' dramatic series win over Toronto, asks what's next, and offers a theory about Boston's phenomenal 6 on 5 play.

Share All sharing options for: Bruins-Leafs Postmortem: 10 Things We Learned

So that was fun, huh? Let's take a look back at the good, the bad and the in-between from this series, and what to look for moving ahead...

LOOOOOOOCH! Milan Lucic took no small amount of abuse in the regular season, first for showing up overweight, then taking dumb penalties on a near-constant basis, and then for taking games off. All in all, he showed as much impulse control as my two year old daughter. However, Lucic was one of Boston's best players skaters in this series, perhaps second only to David Krejci, depending on where you want to put Zdeno Chara. In game 7, Lucic put the Bruins on his back, working his ass off, especially in the offensive zone, and refusing to quit, even when it looked like more than a few of his teammates were ready to do so. For a player who's taken his fair share of abuse this year, he certainly turned it around when it counted most.

Unbalanced scoring. You would expect the Leafs to have an unbalanced scoring profile; in the regular season, they scored 145 goals, 56 by Phil Kessel, Nazem Kadri and James Van Riemsdyk. So 38.6% of their goals game from three guys. And in the playoffs, 10 of their 18 goals (55.6%) came from three guys, although one of those guys was, oddly enough, Cody Franson. But you'd expect Boston to be a bit more balanced, given the supposed depth advantage the Bruins had. Not so much. Of Boston's 20 goals, 12 came off the sticks of David Krejci, Nathan Horton or Patrice Bergeron; 60% of their offense. For comparison's sake, in the regular season, of Boston's 131 goals, 35.9% came from Bergeron, Tyler Seguin and Brad Marchand, but that's higher than we'd expect; in 2011-12, a full 82 game season, Boston got 30.8% of its goal production from three guys, and 31.7% the year before. Some of that change is due to the compressed season giving us a less-than-full picture to look at, but some of it is undoubtedly the decline in production from Boston's bottom 6 forwards. Actually, that merits its own entry...

The fourth line is a train wreck. This was covered by TomServo42 yesterday, so I'm not going to beat it to death, but if the Bruins are going to go any farther in the playoffs, they need to make some changes to the fourth line. Swapping out Shawn Thornton for either Carl Soderberg or Kaspars Daugavins would seem like an obvious move...well, obvious to anyone but Claude Julien, I suppose. Historically, one of the Bruins' strong points has been an ability to roll four lines and keep the pressure on the opposition, but that's not happening right now. The fourth line was a huge liability in round 1, and so was most of the third, for that matter. Jaromir Jagr's frequent one-on-three rushes frustrated more than a few fans, but in fairness, he's been saddled with 393 pounds of dead weight on his line; I'm not sure I can blame him.

Injuries. Hits are something of an unreliable stat; everyone scores them differently and there's almost certainly a home team bias in that scoring. That being said, I'll trust the scorers in Toronto and Boston a lot more than those in, say, Carolina and Florida on this point. They recorded 93 in game 7 for a bone-jarring total of 651 for the series. That's a lot of collisions between full-grown men. By the end of it, Toronto was down two defensemen and Boston three. Admittedly, not all those were due to hits, but this was a grueling series that Boston survived as much as anything. The fact that Johnny Boychuk and Mikhail Grabovski were still on the ice at the end of the series is a triumph of will and stellar conditioning. Thank goodness they have two full days off before the Rangers series starts.

Phil Kessel is a damn good hockey player. It's time to retire the "Thank you Kessel" chant. He outplayed Tyler Seguin (badly) in this series. He was frequently the best player on the ice and he damn near carried his team to victory without a ton of help. Outside of Van Riemsdyk, Joffrey Lupul, James Reimer and perhaps Jake Gardiner, did any other Leaf really stand out in this series? Yes, he whined his way out of Boston like a little bitch. And yes, I would do that trade again 11 times out of 10. But he played like a man in this series, it's time to show him some respect. I realize this is about as likely as ending the "U-S-A!" chant when the B's play the Habs, but still.

It's okay to feel bad for James Reimer. Remember how in the 2011 playoffs, Carey Price nearly carried a very weak Montreal team past the Bruins, and we all agreed to exempt him from the scorn we'd heap on the rest of the Blanc, Bleu et Merde? (I note this is the only positive thing that anyone has written about Price in about three weeks.) Well, Reimer had a save percentage of .923, almost exactly what he did in the regular season (.924). That's pretty damn good. And he, like Tuukka Rask, was playing with a patchwork defense in front of him. A defense that, as far as I can tell, packed up their gear and caught a bus out to Logan with about three minutes to go in regulation. The shot of Reimer laying face down on the ice, utterly dejected, will be one of the series' enduring memories. 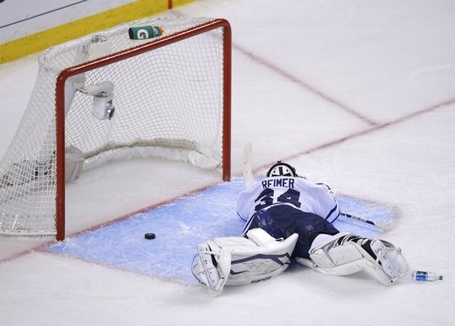 Faceoffs count for something. Boston had the Corsi edge in this series, and while you can argue how much of that was due to score effects, some of it also has to do with the fact that Boston was usually the team starting play with the puck. Rich Peverley didn't bring a whole lot to the table in round 1, but he won 43 out of 59 draws, for an astounding 72.9%. Chris Kelly was similarly impressive at 69.7%. Bergeron was at 62.3%, the slacker. Win the draw, get the puck. If you have the puck, you can score and the other guys can't. Hockey's simple that way. The Bruins can't lean on this crutch forever, though; the Rangers are also very good at the dot.

The defense rests...too much. Get a load of the player usage chart for the defense. Yikes. Admittedly, the picture looks better from an absolute Corsi perspective, but still, the Bruins have been trusting the wrong defensemen at the wrong times. Wade Redden, outside of his excellent game 1, was a huge liability despite getting some pillow soft ice time. Dougie Hamilton may have been getting cushy ice time, but at least he was taking advantage of it. Injuries may ultimately force Julien to do the right thing here and give Hamilton significant ice time moving forward. From a tactical standpoint, the Bruins absolutely must have either Chara, Seidenberg or Hamilton on the ice with Adam McQuaid at all times. McQuaid's vulnerability to the forecheck was exploited mercilessly by the Leafs. Having a mobile defenseman who can move the puck out of the defensive zone is imperative, because whatever positives Darth Quaider brings to the table, that ain't one of them.

Where the hell were Brad Marchand and Tyler Seguin? They did their share to drive play (check out their massive blue dots here), but they had just 4 points and a -1 between them. Seguin, at least, was peppering the net with shots (29 in all), so some of it is surely lousy puck luck, but for two of the team's top three scorers, this has to change.

6 on 5 is our friend. 5 on 4, not so much. The B's scored 3 times on the power play, and 3 times with Tuukka Rask pulled. They spent much less time with an empty net than they did on the power play, and consequently, one of the themes that came up over and again was this: "why the hell are the Bruins so good 6 on 5, but so lousy 5 on 4?" Apart from the rather obvious answer of "sample size", I have a theory, in two parts:

1.The biggest problem the Bruins have on the power play that they're not taking enough shots. Yes, once again, we're siding with the loudmouth up in the 300 level. You know, the rotund chap wearing a mustard-stained Cam Neely jersey (that barely fit him when he was in high school 30 years ago) and who just yells "SHOOOOOOOOT!" on every power play. Well, he's right. (Here's a hot dog, now shut up.) The Bruins had the 5th best 5 on 4 shooting percentage in the league this year, yet the power play rated 26th in percentage in the regular season, and 11th in the postseason. You don't need a degree in mathematics to see the problem there. 6 on 5 situations, however, come with an atmosphere of desperation. They don't have time to cycle the puck around for the perfect shot; everything has to be thrown at the net. The Bruins are forced to do that which they ought to be doing on the power play.

2. One of Boston's biggest advantages over the average opponent is they are both big and fast. The Bruins are at their best when bodies are colliding, pucks are flying every which way, and chaos and mayhem generally reign supreme. Adding another body on the ice contributes to this. More bodies mean more deflections and more guys throwing bodychecks. You've heard about "high energy" teams? Well, Boston is a "high entropy" team.

"So why don't they just play that way all the time on the power play?" Good question, strawman. The most obvious answer is that it's unconventional, and if it didn't work, Geoff Ward would both be fired and ridiculed, which isn't a great combination. I think Jim Rome said it best, "if you're going to be bad, don't be weird, too." Then he repeated the line three times and made half a dozen inside jokes that only people who listen to his show every day would get. Apart from that, a helter-skelter power play with defensemen constantly attacking pucks beneath the faceoff circles would lead to a bunch more shorthanded goals. Also, one of the hidden advantages of a power play is that even an unsuccessful power play serves as something of a rest period for your guys, while taxing the opposition. That's out the window if you're going for the frantic 6 on 5-style attack. Would the increase in power play goals offset those disadvantages? Maybe so, but I doubt we'll get to find out.

I'd be interested to see a team try this style of attack for awhile. The NFL and NBA are constantly innovating with new offenses and defenses. Why can't the NHL?