Chara owns, and is a fantastic captain

The captain of the Bruins is a big man, and at times has been an even bigger target for fans and media alike. However, his play over the last few games has shown exactly why he is this team's captain, and why he leads by example, not by juicy quote.

Share All sharing options for: Chara owns, and is a fantastic captain

Over the course of the last two games, the Boston Bruins have played a lot of hockey, and a lot of high-stress hockey at that. Game 7 of the Toronto series and last night's opening game of the second round against the Rangers both went to overtime, and the two games combined to last a total of 141:05.

Lest one think he was simply out there as a warm body, taking up space, he was a plus-4 with three points and 12 shots on goal in those two games.

Simply put, Chara has played some of the best hockey of his Bruins career this week, and it couldn't have come at a better time.

It's odd, then, to consider that there are still some people out there, fans and media alike, who are calling for Chara's head, or at the very least for the "C" to be ripped from his jersey. One hockey writer said during Game 7 (prior to the comeback) that Chara was "not acting like a captain on or off the ice," and that Patrice Bergeron was more deserving of the "C." It's hard to argue the Bergeron point, as he could be suggested as a candidate for Pope and there wouldn't be much disagreement in Boston.

But Chara as a bad captain? Chara's former teammate Aaron Ward, now an analyst with TSN up north, stepped in to offer some inside information and a first-hand perspective on Big Z's leadership skills, insisting that Chara is as respected within the confines of the locker room as anyone, and that his teammates would "go through a wall for him."

Chara is one of the fittest players in the NHL, climbs mountains for charity, and seems like a generally decent guy off the ice. Where, then, does the media drumbeat of "bad captain!" come from?

Admittedly, Chara does have a habit of not talking to the media when he doesn't feel like it. There was a game a few years ago where the Bruins blew a late lead and lost in Montreal, and Chara, frustrated by the defeat, skipped out on the press. He apparently didn't talk to the media prior to Game 7, which is where Murphy's comment sprang from. He's not nearly as "available" as his more loquacious teammates, like Bergeron, Andrew Ference, or even Ward back in his days in Boston.

And to be fair, yes, speaking to the media is a part of his duties as captain: in a way, he's supposed to be the team spokesman. It's easy to see why some players may view the media as pests, constantly buzzing around for one scrap of a quote, but the media are just doing their jobs, so Chara should just do his. Fair is fair.

But that makes him a bad captain? Ridiculous. Say he's bad with the media, sure (and even that might be a bit hyperbolic), but claiming Chara deserves to be stripped of the "C" is nothing but baiting sensationalism, a "look at me!" opinion designed to get attention (and coveted page views). To his credit, Murphy is far from the only one who has voiced such opinions, and did say recently that he's now "eating Slovakian crow" over his comment. That's admirable honesty.

What's even more admirable, however, is the lead-by-example attitude Chara has displayed throughout his tenure with the Bruins, an example Chara has continued in these playoffs.

Consider this: Chara played massive minutes in the first round against Toronto, frequently against the Leafs' best offensive weapons. He finished at "even" or better in six of the seven games, his only "minus" night coming during Game 6. For the series, Chara was a plus-6 with 25 shots on goal and six points.

His most valuable contributions, however, came down the stretch on Monday night. Without Chara's extra efforts (along with Milan Lucic awakening from his slumber), "Game 7" never would've entered the Boston Sports Pantheon of legendary moments. And it wasn't just the stuff that showed up on the scoresheet.

It was Chara calling for the puck and getting a good, hard, low shot on net that led to Lucic's goal: 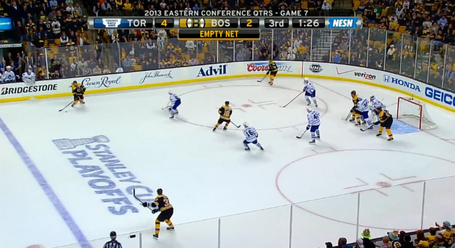 It was Chara being the first man in on the forecheck and taking Dion Phaneuf out of the play (a seven-foot forechecker!): 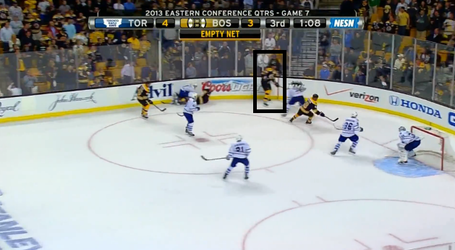 And it was Chara, taking the abuse that comes with standing in front of the net, setting a massive screen on James Reimer on the game-tying goal: 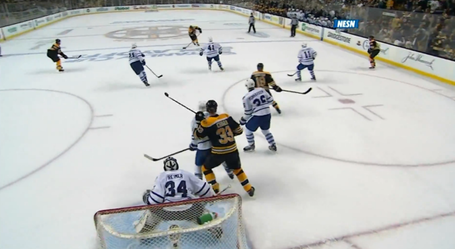 Stepping up and putting forth the extra effort required to win when it's required most. Is there really a better example of leadership? What would Bruins fans (and players, for that matter) prefer: a captain like Alexander Ovechkin who speaks non-stop but has a history of not showing up, or a captain like Chara who does his leading on the ice and in the locker room?

Chara continued that extra effort last night, skating nearly two full periods of TOI in the Bruins' OT win, extending his point streak to five games with a second period goal, and, most importantly, helping his team to a series-opening win.

Taking fitness to the extreme, solidifying the back end, shutting down opposing scorers, and coming up with huge efforts when it matters most. And that's all supposed to be null and void because he's not quick with a quip?

Chara is an excellent teammate, a terrific defenseman, and a fantastic captain.

Now if only we can get Aaron Ward to offer him some interview tips...