The Architect: In Praise of Peter Chiarelli

The players win the games and the coaching staff makes the on-ice adjustments. But what about the guy who put all of the pieces in place? Since Peter Chiarelli was hired in 2006, the Bruins have made the playoffs six times, won three division titles, made it to the conference final twice, and won a Stanley Cup. Here's some praise for the guy pushing all the right buttons.

Share All sharing options for: The Architect: In Praise of Peter Chiarelli

ne of the storylines in the upcoming Bruins-Penguins series reads like something out of a soap opera: after intense negotiations and some wheeling and dealing, a deal to join the Bruins appears to be imminent for a certain hockey figure; at the last minute, he changes his mind and heads to Pittsburgh instead. The Bruins, jilted, are forced to go with Plan B.

The Curious Case of Jarome Iginla and Jaromir Jagr?

Nope. This same scenario played out between these two franchises nearly seven years ago: fresh off of firing GM Mike O'Connell, the Bruins were in the market for a new general manager. After a wide search, the Bruins set their sites on the assistant GM of the Nashville Predators, Ray Shero.

Negotiations intensified, and it appeared that Shero was set to take the reins in Boston, until Mario Lemieux and Co. stepped in and wooed Shero with "complete control." Shero signed a deal with the Penguins on May 25; Chiarelli was signed by the Bruins just a day later.

Geez, Pittsburgh. Mind your own business, will ya?

For that reason, the careers of the two general managers will always be a bit linked, as every fan likes to play the "what if?" guessing game.

However, like Iginla, Shero was probably just taking what he saw as the path of least resistance. In May of 2006, the Penguins were in much better shape than the Bruins. Sidney Crosby (drafted in 2005), Marc-Andre Fleury (2003), Evgeni Malkin (2004), and Kris Letang (2005) were already Penguin property when Shero took over. The Bruins? Uhhh...well they traded their captain a few months earlier, but they had Patrice Bergeron and David Krejci!

For whatever reason, Peter Chiarelli doesn't get much credit in Boston. To wit, he was ripped by some for "fumbling" the Iginla deal, despite making Calgary a better offer and the choice being entirely Iginla's. There were grumblings on sports talk radio last week about their being a "rift" between team president Cam Neely and Chiarelli, so much so that Neely felt the need to clarify and calm the storm during a radio appearance of his own.

Yes, during the playoffs.

The fact of the matter is that since he took over "officially" on July 15, 2006, Chiarelli has meticulously crafted a perennial Stanley Cup contender almost entirely on his own.

Of the 20 skaters who dressed in Saturday's Game 5 win over the New York Rangers, only two Bruins were from the BPC ("before Peter Chiarelli") Era, as mentioned above: Bergeron (drafted in 2004) and Krejci (also 2004).

In the interest of full disclosure, there are a few players who fall in a gray area when it comes to Chiarelli. While he was hired on May 26, he wasn't allowed to "fully" take on his duties until July 15 due to his previous position with the Ottawa Senators.

Technically, any dealings Chiarelli had with the Bruins from the date of his hire through July 14 would've been considered tampering. However, a Boston.com blog post from a few months back had this "wink wink, nudge nudge" tidbit from an interview with Chiarelli a few months after he was hired:

In discussing the moves [that] occurred during his purgatory, Chiarelli told the Globe in July 2006, "Let's just say what I set forth was very specific."

What happened during that "purgatory" period? With interim GM Jeff Gorton at the helm as a figurehead and Chiarelli undoubtedly pulling strings behind the scenes, the Bruins traded for Tuukka Rask, signed Zdeno Chara (and Marc Savard), and drafted both Milan Lucic and Brad Marchand.

If one assumes (as seems logical) that Chiarelli had at least a large say in all of those moves, look at the names he brought in during his tenure: Chara. Lucic. Marchand. Tyler Seguin. Nathan Horton.

Shero took a roster that already had plenty of cornerstones and (to be fair) added to it admirably with moves here and there, acquiring players like Pascal Dupuis, Chris Kunitz and James Neal.

However, Chiarelli took a roster that had two diamonds atop a heap of garbage and polished it into a jewelry collection that would make an heiress green with envy. 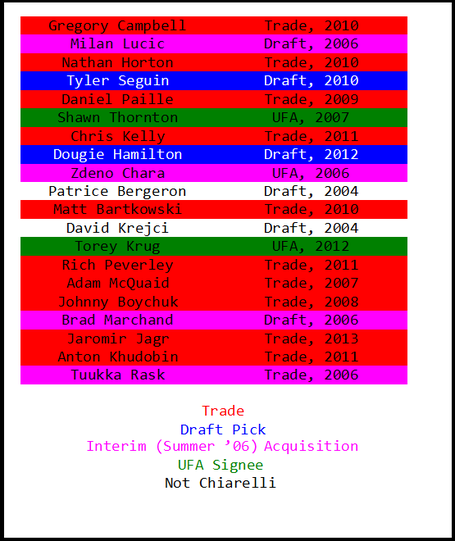 Other Chiarelli gems include:

Chiarelli does have some black marks on his tenure, lest one think this is all sunshine and rainbows. The trade involving Kris Versteeg stands out, as does a slight overpayment for Tomas Kaberle and Chiarelli's worrisome (and potentially crippling) propensity for giving out no-movement clauses.

However, any suggestion that Chiarelli hasn't done his job, or that Neely is unhappy with the way things are going, is ludicrous. Neely isn't calling the shot. Undoubtedly, he has some influence on personnel decisions, but it's Chiarelli who decides who stays and who goes, and this roster (and coaching staff) is his baby.

It's interesting, then, that two men who were once competing for the same job will now meet in the Eastern Conference Final nearly seven years later. Each has a Stanley Cup ring. Each fired a coach. Each has tweaked his roster.

But one started with much less, and did far more work to get here.

Give me this guy any day of the week: