OTBH: Looming Large in the World of Sports Now

The Boston Bruins are visiting the Stanley Cup Final for the 19th time. Here's a story about the first.

Share All sharing options for: OTBH: Looming Large in the World of Sports Now

We all know they've won on six of those trips. Fuck if I know what happens this time around, but it seems as good a time as any to look at some of those earlier Final appearances, those times when the Bruins pursued the pinnacle of this sport's glory. There were grand losses and spine-tingling wins along the way, and baby, we're going to hit each and every one. Because it's the Cup, and all that.

It seems prudent to begin at the beginning -- in this case, the Boston Bruins' first ever trip to the Stanley Cup Final. It didn't take the B's long to get there, playing as they were in the halcyon days of a teeny tiny NHL in which a team was likely to advance to the Final sooner rather than later. So it was that during the 1926-1927 season -- only 3 years after joining the league -- Boston's hockey club found itself three games away from winning Lord Stanley's Cup.

It wasn't the easiest journey to that point for the Bruins, though (but nothing worthwhile in life is overly easy, after all). Out of the ten teams playing that year, six went to the playoffs, and in that olde tymey playoff format, the Division champs received a bye into the the second round. The 1926-1927 Bruins were not, in fact, Division champions, and so their path to the Cup would require the full three rounds of playoff hockey.

Ironically, those Bruins first had to get through a foe we are all about to get real familiar with -- the Chicago Blackhawks. While they finished slightly lower seeded than the Bruins that year, the Hawks had scored far and away the most goals (115) in the NHL over the course of the 44 game season; the Bruins were no slouch in that department, scoring 97 goals of their own, but they would certainly have their work cut out for them in a series that was decided based not on wins, but rather on total goals scored.

In the end, Boston triumphed over the high-offense Hawks, scoring 10 total goals in the two game series to Chicago's 5. This put them in the second round against a refreshed and ready New York Rangers team, who had won the Division handily with a 25-13-6 record. New York was favored in the series, though the two teams were fairly evenly matched. But Boston cared not about predictions and expectations, and after playing a scoreless game 1, they beat New York by a score of 3-1 in the second and final game of the series. 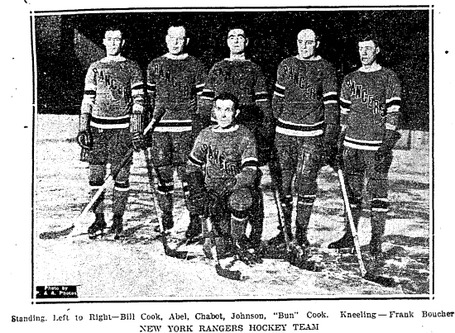 These fools never stood a chance.

And that, my friends, is the short version of how a trip to the Cup Final was born, Boston's first. It was a momentous occasion, deservedly celebrated by the team and fans alike. They were the first American team to play for the Cup, challenging previous Canadian domination of the league. In a cartoon in the Boston Globe the day after the B's defeated the rangers, a headline proudly proclaimed that "Those Bruins surely loom large in the world of sports now as a result of beating Rangers" -- the trip gave the Bruins, and all American-based squads, a boost in terms of respect and legitimacy. 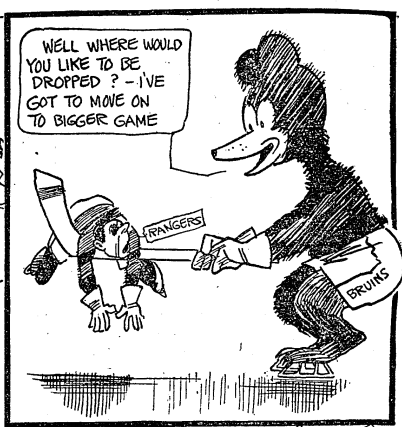 The (olde tymey) Ottawa Senators, after winning their semi-final series against the Habs quite handily, were next up for the triumphant Bruins. Unlike the previous two rounds, the Cup Final was to be played in a way we are more familiar with -- it was a best of five series, and the first team to three wins would find itself in possession of the greatest trophy in sports.

A bit of a wrench was thrown in the proceedings, however, when the first game ended in a tie after two 10-minute overtime periods. NHL President Frank Calder announced that the lack of decision in game one would "mean that an extra game will be played. No more than five games will be played in the series and if neither club shall have won three games at the completion of the fifth game, then the club which has the better record of games won shall be declared the winner."

The best part of all this? Calder ALSO said "if on the other hand it shall have been impossible to reach a decision, then the money in the players' pool will be divided equally bewtween the two clubs."

Translation? Ottawa and Boston would share the mother-effing Stanley Cup.

Unfortunately for buffs of wacky sports history (and for the Bruins), a split decision was not the final outcome of the series: after Ottawa won game two, the two teams tied game 3 as well, and so with Ottawa's victory in game 4 the Cup was officially awarded to the old school Senators (for the last time, as it turns out, since the team was relocated to St. Louis before the start of the 1934-1935 season.

In the end , the Bruins were unsuccessful in their first attempt at playing for the Cup in the Final, but the team and the city had their first taste of Final excitement, a taste that would drive the players to get back there as soon as possible (spoiler: it didn't take long). In the meantime, the Final was a crazy and entertaining series -- the last game included several fights at the end that spilled into the locker rooms and resulted in multiple game ejections, broken noses, multiple game suspensions, and one expulsion from the NHL for Boston Defenseman Billy Coutu.

Boston came into its first Cup Final with a roar, rather than a whisper, and despite the loss, forever cemented itself as a hockey force to be reckoned with. The stage was set, and the Bruins ready for a period that would see them make two more trips to the final in the subsequent three years.