Two trips to the Final in three years. Sound familiar?

Share All sharing options for: OTBH: Rougher and Tougher

Welcome back, friends. I do hope you enjoyed the first installment of "19 and counting: Or, How I Learned to Stop Worrying and Love the Stanley Cup Final trips of Yore." Today, we move swiftly on from that magical 1926-1927 season and vault ourselves forward in history!

...well, maybe not vault. Gently propel? You see, it was a mere two years after their first trip to the Final that the Bruins found themselves once again mere games away from winning Lord Stanley's Chalice. Their path was easier, this second time, as well: as the first place finisher in the "American" Division, the B's got a bye into the second round while the second and third place finishers in each division battled it out in the quarterfinals (take THAT, Rangers/Leafs/Cougars/Americans!).

A free passage into the second round meant that the Bruins would be facing as their first opponent the first place finisher of the Canadian Division -- which that year was the Montreal Canadiens. Of course.

It somehow seems fitting that Boston should have to get through Montreal on it's way to the Cup FInal -- after all, this was a Canadiens team that had Vezina-winner George Hainsworth and one of the League's top scorers in Howie Morenz. They also finished with 59 points over the course of that 44 game season, a League best. Plus, you know: Habs. It seems fitting.

The Bruins won the first of the best of five series by a score of 1-0 at the Garden, before moving to Montreal for game 2. They weren't alone in their travels: everyone's favorite olde tymey traveling fanbase went along, as well. More than 100 rooters boarded trains headed north to cheer on the Boston team as they faced off against the hated Habs on their home turf.

Maybe it was the enthusiasm of those Boston supporters, or maybe the Bruins simply decided they weren't letting the Canadiens back into the series, but in either case, the Bruins once again took the game by a score of 1-0. They followed up that victory by staging the sort of comeback that people write odes to, coming back from a two goal deficit to win the final game 3-2, and completing a series sweep. This sweep was particularly gratifying, as it gave Boston an opportunity to play for the Stanley Cup for the second time in three years.

Their foes in that 1929 SCF? The ever pesky New York Rangers, who had just finished defeating the Toronto Maple Leafs and who were the previous year's Stanley Cup Champion. A formidable foe, indeed. The matchup was a particularly interesting one for fans of hockey, in that it was the very first time two American teams were competing for the Cup.

And compete they did, over the course of a best of three series. Both teams were coming into the Final hot, having dominated their earlier opponentst. Pundits gave the Bruins a slight advantage, pointing out that the Bruins had won 5 of six regular season matchups and were coming off several days of rest (and luxury that the Rangers didn't have due to the series against the Leafs). In most other respects, the two teams were seen as evenly matched, as both were known as "good bumping teams." The expected closeness of the series meant "that the path of the Bruins [was] going to be rougher and tougher" than the one against the Habs, and Boston fans (despite their apparent confusion regarding the bizarre playoff format) were once again ready to support their local team.

One of the fans' most beloved Bruins' players was goaltender Tiny Thompson, who had helped so thoroughly dominate the Canadiens. He didn't disappoint in the first game against the Rangers, either, posting a 2-0 shutout and putting the Bruins within one game of their first ever Stanley Cup. The next day the Globe reported on the strong defense, superlative goaltending, and overall team effort of that Bruins squad:

[The Rangers'] Paul Thompson had a good chance to beat his brother, but Tiny was more than his name might imply. The world's champions of 1928 seldom got inside the Boston defense, and when they did they ran against a bumping Hitchman, still carrying the scar over his left eye received in the final game against the Canadiens...the men bumped hard, and in this the Bruins were decidedly the better, the Rangers showing signs of weariness after their four games against the New York Americans and Toronto Maple Leafs.

On March 29th, the two teams met again -- the Rangers on the brink of elimination, the Bruins on the cusp of victory. The final score -- 2-1, Bruins -- is perhaps the least interesting part of the story. Rather it is the bringing to Boston of the Stanley Cup for the first time that lives in our collective memory. It is the unprecedented run the Bruins made to get there -- never losing a single game during the entire playoffs (even though they only needed to play five games to achieve that, rather than the 16 a team today would need). It is the fact that in only its second trip to the Stanley Cup Final, the Bruins successfully defeated the defending Cup champions. 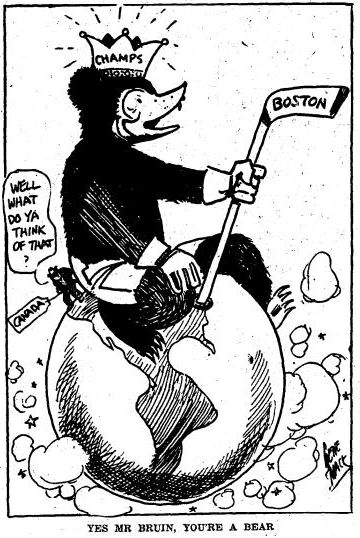 Have I used this cartoon before? Do I care?

And then there's the fact that this Bruins team was very, very good. From Thompson to HItchman to Shore, this squad had a championship makeup. Two trips to the SCF in three years (and (spoiler) three in four years) is nothing to look down one's nose at. The first truly great confluence of players and coaches and management, this group brought the city of Boston Stanley Cup glory for the first time -- and though it would take a while, it wouldn't be the last.

...next time, on OTBH: Stanley Cup Final Edition! Back to back trips to the Final? Don't mind if we do!