There are losses, and then there are *losses*.

Hey, remember when the Bruins won the Stanley Cup? No, I'm not talking about 2011 (though that was deeee-lightful): I'm talking about when they won in 1929, a glorious event that we talked about a mere 24 hours ago!

Ok, lemme explain. No, there is too much. Lemme sum up: The Bruins, after having made their first Stanley Cup Final trip two years before, won their first ever Cup by defeating the New York Rangers in March of 1929. Huzzah!

One wouldn't necessarily be surprised to find a bit of a Cup hangover take effect the following year -- it's a pattern we've seen before and since, after all. After winning the biggest prize in hockey, a bit of a fall-off is maybe to be expected, even.

The Bruins team of the 1929-1930 season didn't appear to get that memo, however. Their final season record was a frankly absurd 38-5-1. They had a winning streak of 14, at one point. They had a 43 goal scorer (Cooney Weiland) in a 44 game season. Tiny Thompson, the goaltender that backstopped them to a Stanley Cup the previous year, won the Vezina. They lost five games all year, that's it. Five. Correct me if I'm wrong, but that might be considered good? 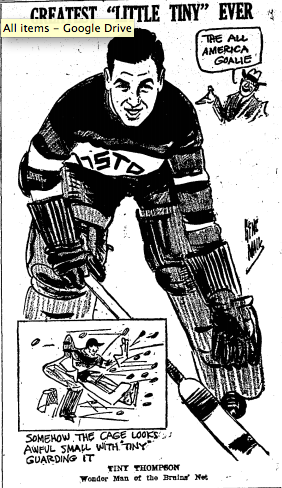 With that extraordinary record under their belt, the Bruins entered the playoffs as heavy favorites to win the Cup again. They once again had a bye into the second round, where they faced the Montreal Maroons -- the series, despite having one scary moment (the Maroons managed to win game three) went much the way people expected, and the Bruins wrapped it up tidily in four games.

The stage seemed set for the Bruins to accomplish one of the hardest feats in hockey -- to repeat as winners of the Stanley Cup.

Of course, things never go quite the way you imagine, and with great expectations can sometimes come the greatest disappointments. The Stanley Cup Final, rather than being the cherry on top of the sundae that was the Boston Bruins' season that year, was instead a defeat at the hands of the Montreal Canadiens, and a two game sweep that stunned the team and fans alike.

The Bruins had won all four games against the Canadiens that year, and seven in a row going back to the previous year's playoffs. They were healthy and confident and ready to play. The first game, played at Boston Garden, was expected to be raucous and packed and the Bruins were expected to dominate. Instead, they were shut out -- shut out -- by the Canadiens and their stingy defense. They also were confronted with the speed of previous League MVP Howie Morenz and the superb work of goalie George Hainsworth. 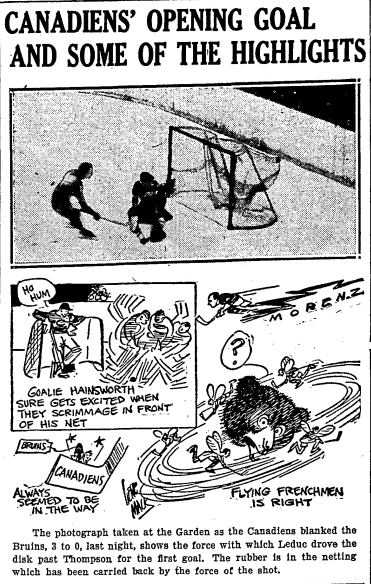 But no matter, the Boston faithful said. The Bruins hadn't lost two games in a row all season. They would get the next one back, when the series moved to Montreal.

But they wouldn't, and though the Bruins put up a much better fight (the final score was 4-3, Habs), the Bruins team who had lost a total of 6 games, regular season and playoffs combined were swept out of the Stanley Cup Final.

Some people might say that a loss is a loss, is a loss. But doesn't it just grate a little bit more, isn't the sting a bit more biting when the loss is to a hated rival? Maybe the Bruins of 1930 didn't see it that way -- for them, perhaps any loss in the Final would have hurt as badly. Maybe this was truly the beginning of the feelings of animosity between the two teams. In any case, the Bruins fell short, and though they had made their way to the Final for the third time in four years, the result was a heartbreaker.

...Next time on OTBH: Stanley Cup Final Edition! What do you mean, it's going to be almost ten years before another SCF trip? Ugh, Bruins.