After almost a decade, another shot at Lord Stanley's Chalice.

Once more unto the breach, dear friends -- wherein the "breach" is "the history of the Bruins in the Stanley Cup Final," and "once more" actually means 16 more times. But, you know. Same difference.

By the time the 1938-1939 season rolled around, nine long years had passed since the last time the Bruins had made it to the Cup Final, and it had been ten years since they had won their first (and to that point, only) Stanley Cup. It wasn't all bad news - they made it to the playoffs in seven of those nine years, and played in the semi-finals a few times before failing to make it to the Final. Still, it was quite the drought, and Boston fans were spoiled after the "three Final trips in four years" heyday of the later 1920s and early 1930s.

The 1938-1939 season had a different feel to it, though, For the first time in ten years, a goaltender other than Tiny Thompson was playing for the Bruins, a plucky rookie by the name of Frank Brimsek. He backstopped the B's to an exceptional season, the team going 36-10-2 and Brimsek posting 10 shutouts. There were familiar names peppering the lineup -- Dit Clapper, Eddie Shore, and Cooney Weiland, to name a few -- but players since the 1929 Cup winning squad also made a difference that season. Roy Conacher, Milt Schmidt, and Woody Dumart led the team in goals scored, and the B's ended the season at the top of the league, having scored 156 goals and only allowing 76.

Regular season success aside, however, the playoffs proved a challenge. The Bruins began by playing the New York Rangers in the semi-finals, where (perhaps this rings a bell) New York forced a game seven after being down 3-0 in the series. The Bruins, in the end, managed to win in a triple-OT marathon game, and off they went to their first Cup final in almost a decade.

And so off the Bruins went, after first securing agreement on the part of their opponents and the league to postpone the start of the series (apparently a 7 game series that ends in triple overtimes really takes it out of you. Who knew!), to face the Toronto Maple Leafs in a best of seven Cup Final, the first time the championship was to be decided over the course of the full seven games.

The Leafs promised to be an interesting foe for the Bruins, who had lost their previous four playoff matchups against Toronto. Some saw the Bruins as the favorite, despite the so-called "Toronto playoff jinx": the Globe reported that, after the end of the New York series, Lester Patrick himself approached Art Ross and said "You'll probably lose the opener Tuesday, but then you ought to win."

Well, it turns out Patrick was wrong about one thing -- the Bruins didn't lose the opener, but rather beat the Leafs 2-1 at the Garden. 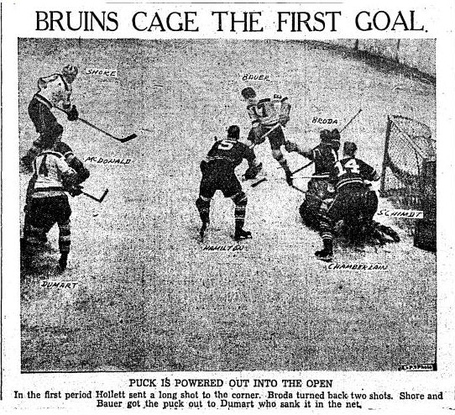 Both teams knew, however, that one game is just one game -- you can't rest easy when you've won the one game, because the other team is going to come back wanting it that much more. And the Leafs did just that, coming back in game 2 to battle to a 3-2 overtime win against the Bruins, and tying the series at one game a piece.

The Bruins weren't content to let that heartbreaker of a loss set them back, though, nor were they about to let their abysmal record at Toronto bring them down when the series shifted for game 3. Rather, they rallied to score 3 third period goals in a 3-1 victory, taking a series lead.

Then, they won the next game. A 3-1 series lead. Certainly no lead was safe, as the Rangers had demonstrated previous round. also, as it turns out, Boston fans and beat writers have been paranoid since the beginning of time: "If the Bruins win," Victor Jones wrote the day of a potentially Cup clinching game, "--and there's no use denying that they could very well lose..."

Ah, paranoia. Nonetheless, it felt to many as though the Bruins, on the cusp of Stanley Cup victory, could do this, they could win one final game against the Leafs, and do it on their own turf.

And guess what: that's just what they did.

It had taken almost a decade, but the Bruins were once again Stanley Cup Champions. Better yet, that playoff run ushered in a bit of a golden age for the B's. Ah, but I'm getting ahead of myself. For now, let's revel in the glory of this picture, and Boston's second Stanley Cup: 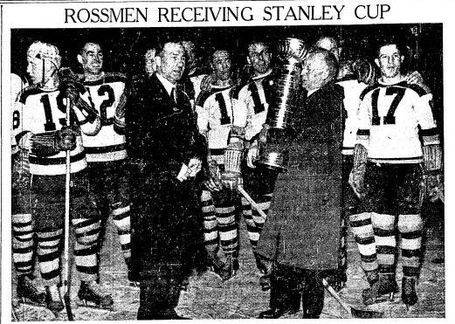