OTBH: Two Out of Three

It ain't bad, as they say

Share All sharing options for: OTBH: Two Out of Three

It seems like only yesterday we were talking about 1939, a year that not only meant the end to the Stanley Cup Final drought in Boston, but also meant the return of the Cup to Boston. Good times, friends.

But the past is the past, and one musn't dwell on former glory (ha!). Instead, one must look forward, toward the future, and what it held for those plucky Boston Bruins of yore. Cup triumph was followed by first-round playoff disappointment (sigh), with the Rangers beating the B's 4 games to 2 in the semifinals. Despite a mostly intact cast of characters, the Bruins were simply not able to figure out the boys from New York, and had to watch as the Stanley Cup passed onto them after the Rangers beat the Leafs in the Cup Final.

Perhaps this disappointment gave the Bruins a bit of a kick in the pants. Perhaps ‘Cup hangover' is a real thing. Whatever the reason, the boys in black and gold went into the 1940-1941 season with a vengeance. They posted an unbeaten streak of 23 straight games and ended the season in first place overall. They had three first-team and three second-team all stars, and Bruins players won the Hart and the Lady Byng. It was a dominant season for the Bruins, no question. We've seen time and time again, however, how little regular season dominance can sometimes matter when it comes to the playoffs.

1941 still saw the top two teams receive a bye into the semi-final round, and so the Bruins found themselves facing the Maple Leafs in a best of 7 series. The matchup began at the Garden, which was in possession of a fancy new scoreboard/clock, and though it took all seven games and resulted in injuries to key players like Bobby Bauer and league leading scorer Bill Cowley, the Bruins persevered and earned a berth in their second Cup Final in three years. 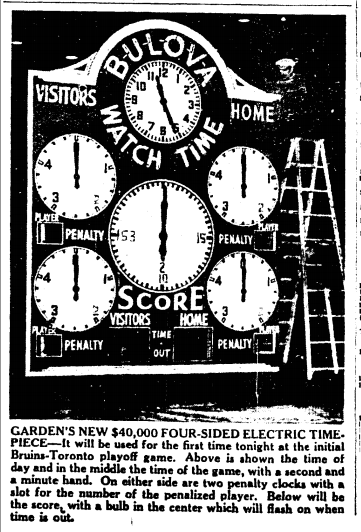 Boston Captain Dit Clapper was to lead his band of merry men against the always fearsome Detroit Red Wings. Though bruised and battered after the long series against the Leafs, the Bruins were almost back to full health. The Wings were coming off recent Cup victories of their own (they won in 1937 and 1938), and pundits seemed split on who would take home the big trophy.

The first game was tightly played, with the Bruins eking out a narrow 3-2 victory. Alas, they also lost Milt Schmidt along the way, as he left the game in obvious pain in the third period. They took the second game, as well, with goaltender Frank Brismek allowing only one goal and the B's finally scoring two in third period.

Up 2-0 in the series, the Stanley Cup was in sight, though by no means assured. The contest moved to Detroit, and though no one on the Bruins team was getting ahead of themselves, the press certainly was: as Gerry Moore wrote after the triumph of the game 2 shutout, the victory sent "15,000 rooters, who may have seen the B's for the last time this year, away happy over a 2-1 victory."

A touch of hubris, there, but one that was backed up by the actions of the Bruins, who went into Detroit and did something unlikely as hell: they swept the Detroit Red Wings, taking both games in their barn. And just like that, the Bruins had done it -- they were Stanley Cup Champs for the second time in three years. Not a dynasty, not by any means, but something pretty special.

Something so special, in fact, that it was the first time in the history of the best of seven series (all two years of it) that a team had won in four straight. Frank Brismek was exceptional, and after the series Detroit players lauded his work, and the work of the Bruins team as a whole. This team was a bit of magic, and even the opposing players seemed to get that. They would even get to experience that magic again first hand two years later, when the Wings and the Bruins met yet again in the Stanley Cup Final -- but that's another story, for another day.

Today's story is best summed up by this picture -- a team, celebrating together, bringing the city they played for a second Cup in only three short years. Good on ya, boys. 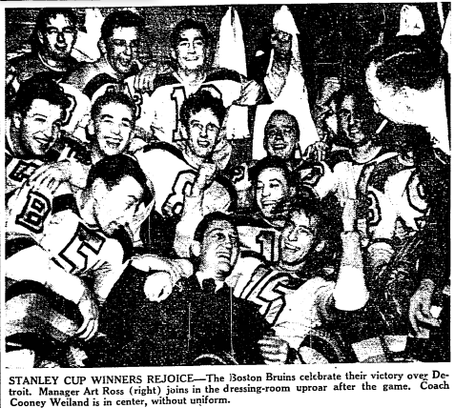