Jaromir Jagr has won the Gold Stick 11 times, but he came in second this year to teammate David Krejci, who finally won his first award as the best Czech hockey player. AND IT'S AWESOME.

I wrote earlier this month about the Gold Stick, (Zlata Hokejka in Czech), the award given out annually in the Czech Republic to the best Czech hockey player. Over the course of months and multiple rounds of voting by coaches and journalists, the best Gold Stick usually ends up being awarded to Jaromir Jagr. At least, it has been 11 times - far more than any other Czech player in the history of the award (which has existed since 1969).

Literally, they changed the rules for voting because of David Krejci's seventh place finish in 2011. Krejci's seventh place finish in voting in 2011 was high robbery, but voting ended well before the NHL season ended. Although he helped the Bruins win a Stanley Cup by leading the playoffs in scoring, Jagr was awarded his 11th Golden Stick award that year based on his KHL performance. After that, they changed the system of voting to take into consideration the NHL playoffs. Last year, Patrik Elias was awarded his second Gold Stick after leading his New Jersey Devils to the Stanley Cup Final. 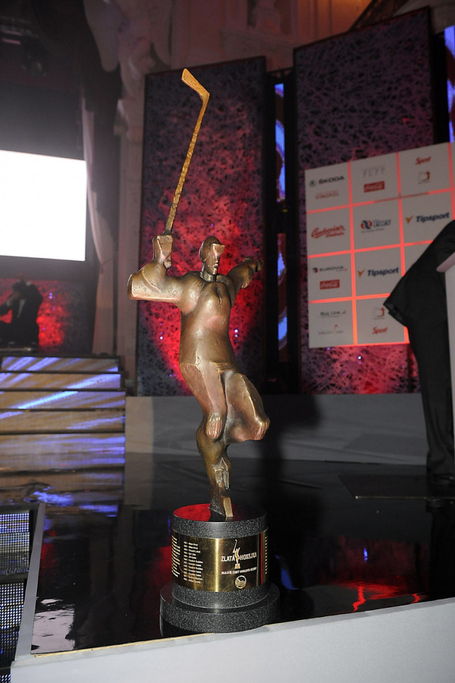 Photo courtesy of Zlata Hokejka 2013. For more about the award, past winners and rules, visit here.

The results and winner for the award was announced today. In fact, it just happened about an hour ago in the Czech Republic. They start by announcing the top ten, working from number ten down to number one. It was a nail-biter, and in the end, it came down to teammates Jagr and Krejci.

And then it was announced that number two is Jagr.

Which meant number one is Krejci.

There's not much that can be said about what an awesome achievement and great recognition in his home country this is. And to beat out his childhood idol by 60 points is even more spectacular.

It should also be noted Krejci spent the lockout playing in the Czech Republic, where he dominated in scoring before returning to the NHL when the lockout ended. His sub-par regular seasons usually keep him out of the top three or five in voting for this award, but thankfully his significant contributions in the playoffs are now able to be taken into consideration.

I just wish we could have seen his reaction. We know Krejci is a soft-spoken guy, and this team puts an emphasis on team so much that he will undoubtedly shrug it off the best he can, but I'm happy to be as excited for him as he would be for himself. I'm content with him being too focused on winning against Chicago tonight than over celebrating this fancy trophy. Here's to hoping he continues to show everyone why he was voted best Czech player in the world!

The voting finished as follows:

Special thanks for twitter user @sissv for live-tweeting the gala over in the Czech Republic!