Stay at home offense: a prolific postseason by Bruin blueliners

The Bruins are, for all intents and purposes, a defense-first team. Claude Julien's system preaches defensive accountability, and the Bruins' defenseman are, for the most part, a stay-at-home group more concerned about keeping the puck out of their net than they are about putting it in the opposition's net. Remarkably, that has completely changed during these playoffs.

Share All sharing options for: Stay at home offense: a prolific postseason by Bruin blueliners

The Bruins, as a team, think "defense" first. They're not a run-and-gun team, and never will be with Claude Julien behind the bench. Their defensemen are expected to, well, play defense, and any offensive contributions they can make are just bonuses. The blueline is comprised mostly of stay-at-home types, with few wandering Subbans, Letangs, or Karlssons among them.

Raise your hand if you knew the Bruins' defense would undergo an offensive renaissance like this.

The Bruins' offensive explosion from the normally stay-at-home stalwarts has been nothing short of amazing, bordering on the absurd. 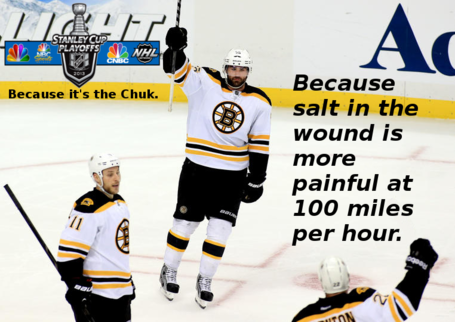 Zdeno Chara put up 19 points in 48 games this regular season, yet he already has eleven points in 14 postseason games, a torrid pace that equates to 38 points in a 48 game season.

Then there's Torey Krug, who burst onto the scene with four goals in the second round series against the Rangers. Krug now has more playoff goals (four) than he has regular season games-played (three).

When talking about the Bruins, "punch" from the blueline usually refers to actual punches, not offensive output. Prior to the puck dropping to kick off the first round, any hockey analyst discussing the most offensively-gifted teams in these playoffs would have jumped to Ottawa, led by Karlsson and Sergei Gonchar, or Pittsburgh, with Letang and Paul Martin.

The Bruins? Probably at the bottom of most lists, and rightly so.

Instead, however, the exact opposite has happened. Here's a look at the four remaining teams, and how their defenses scored in the regular season vs. the postseason:

As one can see by the pretty colors, the Bruins have had the biggest increase in both points per game and goals per game, and it isn't really close. The B's are getting nearly a point per game more from their defense in the playoffs, and a half a goal more as well. And while the Penguins are averaging more points per game from the blueline (in 13 games played, as opposed to the Bruins' 14), the Bruins' defensemen are putting the puck in the net themselves far more prolifically.

Logically, the next question is "why?" It's a good question, and one that can't really be answered with 100% certainty.

From the last ten minutes of Game 7 vs. Toronto through the final buzzer on Monday night, the Bruins have been doing all the right things, and that includes the defensemen: they've been getting bodies to the front of the net, setting screens, tipping pucks, getting shots on net, and facing the Penguins' goaltending (which always helps).

The Bruins' defense corps has also been shooting the puck a bit more, averaging nearly 12 shots per game in the playoffs vs. around ten in the regular season.

But there's another reason, and one that isn't exactly great news for the Bruins or their fans:

Yes, lady luck, puck luck, fortuitous bounces, whatever one wants to call it. The Bruins are getting the breaks right now when it comes to their defensive scoring, and it's up to them to keep riding the wave.

Sure, until one looks at some of the individual numbers a bit more closely:

Does this mean all of the scoring is a fluke? Yes, but also no. The Bruins can't expect to keep getting one goal for every five shots Krug takes, or one goal for every eight Johnny Rockets. However, the introduction of the speed and skating games of Krug and Matt Bartkowski has given a new look to the Bruins' defense corps, as those two are creating more space for their partners. More space leads to more time, more time leads to more shots actually hitting the net, and more shots hitting the net leads to more goals. Science!

The Bruins have a good thing going on the blueline, as those skaters are not only putting up points but are playing solid defensively as well.

If it's a fluke? The Bruins and their fans only have to hope that the wave keeps coming for another ten days or so, and that it ends with a crash into the top of the Stanley Cup.