Half of a PK on a broken leg, guys. You may have heard.

As part of the locally (and nationally) media-vaunted "Merlot" line, Gregory Campbell had his share of ups and down this season. The enduring image, of course, will forever be of Campbell down on one knee as he tried to gut out the back half of a penalty kill so as not to leave his teammates stranded in game 3 of the series against the Penguins. It's a stunning visual, and it has been seized on by advertisers and fans alike as a symbol of endurance and the toughness of hockey players (and "Bruins-style" players, in particular).

There was more to Campbell's season than that one series-defining shift, however: let's take a look at how that went for him.

Campbell had 13 points over the lockout-shortened 48-game season, almost matching his total of 16 from the 2011-2012 campaign (he played 78 games). Offensively, it wasn't a terrible season for him: his career shooting percentage is 7.5%, and in 2013 he shot 7.7% (of course, his career % is skewed up a bit because of 2010-2011 and 2011-2012, where his shooting percentage was much higher than in his previous 5 NHL seasons). In any case, Campbell produced at about the rate one can expect from him in a given season.

Now, the only Bruins players who were negative Corsi-wise this season (who played more than 20 games -- so not guys like Spooner, Soderberg, and Tardif) were Campbell and Shawn Thornton. The Thornton issue aside for the moment (but hoo boy did Servo have some words for you on that topic), and taking Corsi in its broadest sense as a measure of possession, the team simply had the puck less when Campbell was on the ice -- and as his negative Corsi Rel QoC shows, all against the the opposing team's weaker players.

This nifty chart shows this graphically -- you can see Campbell and Thornton all alone in their brown negative Corsi-ness, but also how often they are being played against weaker competition. Not good. 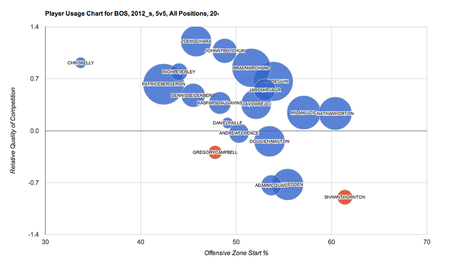 The picture is, of course, more complicated than that: as a fourth line center, Campbell and his linemates aren't necessarily supposed to score in bunches, or even create sustained pressure in the offensive zone. I mean, that would be the ideal. But in more of a checking role, despite a poor Corsi showing, Campbell was still successful at getting the puck out of the Bruins' end: he had a positive 3.4% zone shift (meaning he ended up in the offensive zone more often than he started there) while starting only 47.8% of his shifts in the offensive zone. He also won a decent 50.5% of his faceoffs, and in a pinch was able to fill in for top-six players when they went down with injury during one or two memorable games.

All of which doesn't even touch on his usefulness in other areas of the game, and in particular, on the aforementioned penalty kill. His total ice time per 60 on the PK was 2 minutes 15 seconds -- more than any other forward on the team. He also managed to end his shifts in the offensive zone exactly 50% of the time, despite only starting there 12.9% while killing penalties. It's clear he did some serious heavy lifting on the kill (along with Kelly), which is important on a couple of different levels, not the least of which is: the more the team can keep at least some of the PK responsibility off of Bergeron, thereby keeping him rested for ES/PP situations, the better off everyone is.

Campbell had 3 goals and 4 assists during the 15 games he played during the 2013 playoffs, including one two-goal game against the Rangers that once again had a bunch of people singing the praises of Boston's fourth line. It was the PK heroics mentioned at the start, however, that truly defined Campbell's postseason. Some people took issue with the precedent he set by remaining on the ice while so obviously injured; others hailed that moment as one that typifies the grit embodied in hockey and hockey players. Whatever your feelings, it was a defining moment, and one that will be mentioned early and often whenever Campbell's career comes to a close.

When it came to maintaining possession, Campbell struggled a bit this year -- but mostly only in comparison to the rest of Boston's ridic possession maintaining players. Of the 170 forwards in the NHL who played more than 20 games this season, and averaged less than 12 mins a game (so bottom six minutes), Campbell ranked 69th -- pretty solidly in the middle. [Note: see below comments for why this isn't necessarily the best way to evaluate performance.] Furthermore, Campbell did a decent job fulfilling the rest of his fourth line duties on the team: he won faceoffs, he contributed on the PK, he helped get the puck out of Boston's zone.

And: that shift, man.