"Rearview Mirror" is a series that takes a look back at notable games, players, or events from the recent past. This first installment takes a look at Marc Savard's memorable first season as a Bruin, in which he recorded 96 points.

In October of 2006, excitement about the Boston Bruins was pretty high. The bad feelings that had lingered after the team unceremoniously dumped team captain Joe Thornton early in the 2005-2006 season had been soothed a bit by the Bruins making the two biggest free agent signings of the summer, adding towering defenseman Zdeno Chara and wizardly playmaker Marc Savard to the roster.

It was an out-of-character move by a notoriously stingy owner, and fans were cautiously optimistic that maybe, just maybe the team was getting ready to turn the corner.

When the sun rose in Sunrise on Oct. 6 and the B’s prepared to kick off their campaign against the Florida Panthers, fans flocked to their televisions with a renewed sense of hope for a franchise that had become moribund and prone to underachieving.

But then the puck dropped, the Panthers pasted the Bruins by a score of 8-3, and the Bruins were on their way to their second-worst season of the 21st century (and the 20th-worst season in franchise history, for those keeping score at home), a mere two-point improvement over the previous season.

Considering the circumstances under which he worked, Savard’s 22 goal, 74 assist, 96 point 06-07 season is inarguably one of the most individually impressive seasons by a Bruin in the last 20 years.

Savard came to the Bruins as an underrated and under-the-radar playmaker, a guy who put up a ton of points, but because he put them up as an Atlanta Thrasher, no one noticed. In the season before he was to become an unrestricted free agent, Savard scored 97 points for an Atlanta team that didn’t make the playoffs, recording 28 goals and 69 assists, good for ninth place in overall NHL scoring.

Savard used that season as a springboard out of obscurity and found his big payday in Boston, where he was expected to be the playmaking center the Bruins had lost when Thornton got shipped to San Jose.

In Atlanta, Savard played with unbelievable talents like Marian Hossa and Ilya Kovalchuk, who were complemented by veteran scorers like Slava Kozlov and Peter Bondra.

However, despite having about as many scoring options as the Atlanta Thrashers had hockey fans, Savard came as advertised in his first season in Boston.

He recorded his first point as a Bruin in that Opening Night pasting at the hands of the Panthers, and notched his first goal three games later in St. Louis. He had his first multi-point evening in the sixth game of the season, had a three-point night four games later, and then had a game for the ages two nights later against Tampa Bay.

In that game, Savard scored twice and added three assists, including a helper on Murray’s overtime winner, to lift the B’s to a thrilling 6-5 overtime win over the Lightning.

The Bruins went 3-5-1 in the season’s first month, with Savard scoring seven points. However, the team had a bit of a surge in November, going 9-4-1.

The catalyst? Savard, who put up a remarkable 21 points in those 14 games.

Given the lack of talent in his supporting cast, what is perhaps most impressive is how consistent Savard was. As all players do, Savard did have his yearly slump (his worst month was March, in which he scored eleven points in 16 games).

However, Savard never went more than three consecutive games without recording at least one point, and scored a point or more in 55 of his 82 games (66%). He averaged better than a point per game, coming in at 1.17 PPG.

His scoring streaks were impressive as well, as Savard scored 14 points in an eight game span in February, had two scoring streaks of seven games, and scored in 16 of 18 games from Oct. 12 – Nov. 25, racking up 26 points over that stretch.

An infographic taking a look at Savard's season by the numbers 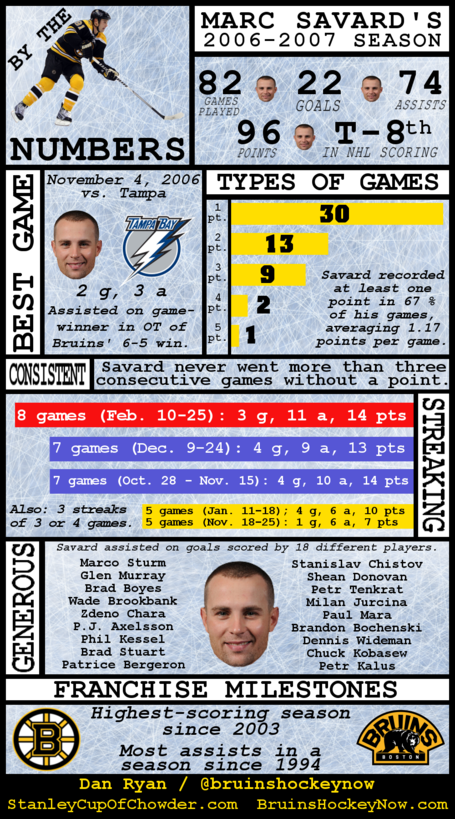 It’s important for elite players to make those around them better, and while Savard couldn’t lift this bunch of misfits into the playoffs (though he tried his best), he did elevate the game of his teammates.

Savard assisted on goals scored by 18 different players in 06-07, helping noted scorers like Petr Kalus, Wade Brookbank, Milan Jurcina, and Paul Mara put pucks in the back of the net.

He was also a boost to the power play, scoring 49 of his points with the man advantage and boosting the Bruins’ PPG total by nine over the previous year.

Simply put, Savard had an unbelievable season with a supporting cast that was weak at best.

The difference? Oates played with Ray Bourque, Cam Neely, Joe Juneau, Glen Wesley, and Ted Donato that season; Thornton had Murray and Brian Rolston in the prime of their careers, and also had bruising Mike Knuble.

The Bruins have had some remarkable talent in recent years, and have assembled teams that make that 06-07 team look like a pee-wee squad. But in all the season since, no one has come close to reaching Savard’s 96-point mark (except for Savard himself, who recorded 88 points in 2008-2009).

Was it record-breaking? No. Was it a memorable season for the team? Yeah, but for the wrong reasons.

But it was a remarkably impressive performance by an individual who elevated the play of those around him.

That alone deserves a statue on Causeway Street.