The Curious Case of Chris Kelly.

Oh, man, it's Chris Kelly day! And on my birthday! Magical.
Chris Kelly, in his second 'full' year with the Bruins, had what could kindly be termed a "down" season. In fact, ask many Bruins fans/readers of this very site what they think of when you say the words "Chris Kelly," the answers you'd most likely get are "is paid too much," "is terrible," and "should be traded."
His above numbers -- 9 total regular season points, and a minus-8 -- certainly support those sentiments. After having (by his own standards) an unsustainably good 2011-2012 season, what was fair to expect of him this year? And was he really as bad as the above stat line indicates?

Kelly missed 14 regular seasons games after getting his tibia torched in a game against the Senators. In the remaining 34 games, he centered a constantly shifting third line, which saw Rich Peverly, Chris Bourque, Jordan Caron, Jaromir Jagr, and Tyler Seguin rotate through as wings. His final offensive production, with 3 goals and 6 assists, was plain awful, and representative of that third line's struggles as a unit. His points/60 minutes of ice time was 1.15, tying him with Shawn Thornton. Shawn Thornton.
Now, his previous season's numbers (20 goals, 19 assists, and a whopping 11.35 on-ice shooting %) were unsustainable in a major way. There was going to be a fair amount of regression -- but Kelly appears to have swung completely in the opposite direction. If his 2011-2012 numbers were unsustaintably good, this season's were unsustainably bad: his on ice shooting % was 5.56, which is historically low for him. His PDO of 960 (again, low for him) also suggests that his bad year had some to do with a bit of rotten puck luck.
It's clear that Kelly was not pitching in offensively at the rate we should expect, but what of his contributions in other areas of the game? Once again, he proved vital to the penalty kill, playing 2:08 short-handed minutes per 60 (more than any forward not named Greg Campbell). His Corsi On was low, especially for this Boston team, but still in the black at .86. This is especially impressive considering the really particular way Kelly was used this year by Julien and Co. He began his shifts in the offensive zone -- wait for it -- only 33.7% of the time. That's cray-cray, almost 10 full percentage points less than the next highest player (and significantly lower than his previous season low of 45.8%), and that's including defensemen. And it's not just low for this team: out of all forwards in the NHL who played at least 10 games this season, only 19 people had fewer offensive zone starts than Kelly (side note: damn, Boyd Gordon.)
His usage was so drastically different than the rest of the team, in fact, that we should all take a moment to appreciate the visual: 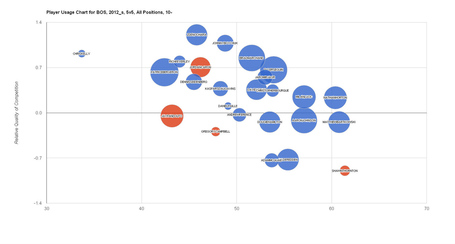 (Bottom axis is zone starts. Image from here)
Look at Kelly's blue dot, way the hell over to the left of the image. Given how infrequently he was starting out in the offensive zone, the fact that he had a positive Corsi On at all is impressive, as is the positive zone shift he had (13.7%, not too shabby, and 1.2 percentage points better than expected, using this data). And he did it against tough competition, ending up with the highest Corsi Rel QoC of all Boston Forwards. This suggests that, while not producing offensively, he was doing a pretty good job in the role he was given: he (barely) created more corsi events than he allowed, he was effective at getting the puck out of the Bruins' own end, and he helped to shut down other teams' effective players. He also won 57.9% of his faceoffs, contributing to the teams kick-ass overall faceoff %.
Aside from his lack of production, then, Kelly's biggest knock is off the ice -- his salary. His GVS is t-e-r-r-i-b-l-e, but as others have pointed out, that measure isn't necessarily the most appropriate for defensive-minded forwards. Nonetheless, that 3 million a year is too much for the role Kelly can be expected to play, and understandably colors the way his performance on the ice is viewed.

...Were not that great for Kelly, despite the newly formed third line (after Campbell's injury) of Paille-Kelly-Seguin finding some chemistry during the Final. He went, what, 18 playoff games without a goal? Something crazy. He still won a ton of faceoffs, and his zone starts/zone shift were similar to his regular season deployment, but everything else was not so good (negative Corsi on, Corsi Rel, Corsi Rel QoC, shitty P/60, you name it).

On the other hand, where the other hand is "intangiables," the rumor is that is was Kelly that gave the team a talking to after the first period of game 2 against Chicago. This is not a team that's short on leaders, certainly, but the players appear to regard Kelly as an important one (hence him getting the shared 'A' after only half a season with the B's).

He also gets extra points for rocking a bitchin' scar/beard combo that made him look like a character out of the Three Muskateers.

This was a fairly crappy year for Kelly in the offense department, but I would expect him to have a bit of a bounceback year next season, points-wise. His low on-ice shooting % this year shouldn't continue, based on his previous seasons in the league, though it's unlikely to rise to what he posted in 2011-2012. Regardless, this year was abysmal offensively for him, even though he performed his other roles on the team -- as a PK specialist and defensively-minded bottom six center -- better than the eye test might indicate. Unfortunately for him, he will always be judged within the context of his salary, which is too much by far, and over too many years.

A final word on stuff that I'm still trying to wrap my brain bits around: the third line's woes this past season were obvious to anyone, and have been well documented. In an ongoing quest to figure out exactly what was going on there -- aside from the never-ending rotating door of wingers who were Not Very Good -- I looked at Kelly's WOWY info. It's interesting that Peverly and Kelly (both of whom had down seasons) seemed to not be particularly good for each other. Would that have been different with someone who worked well with the two of them? I'd guess yes. In any case, it's not like one or the other of them was having such a great season that they could drag the other one up, and this info appears to bear that assessment out. Also Dan Paille is great.