The Bruins have had the same all-black third jersey for almost five years now. While the jersey is a nice one, the pining for the old days of #TeamPooh and the yellow alternate sweaters remains strong among certain segments of the fan base. In a bit of summer fan, here are some designs for a potential new gold third jersey.

The Bruins haven't regularly worn gold sweaters since 2006, when the famed Pooh Bear alternate jersey was retired. Prior to that, the last time the B's wore gold with any degree of regularity was when it was their primary color back in 1967. Sure, the 2010 Winter Classic jerseys were gold (and beautiful), but they've been retired, relegated to mothballs since a few months after the game took place.

And while the current alternate jersey is nice, the B's played it safe and went with black, a menacing yet bland color, instead of taking a chance on a gold jersey.

So in the interest of summer discussion, here are some original Bruins jersey concepts, renderings of potential new Bruins jerseys where gold serves as the primary color. Kenny Bania would be very proud.

Some are blends of traditional jerseys from the past, while others are completely new designs (and, as a result, will probably be greeted with skepticism because hey, no one likes change). 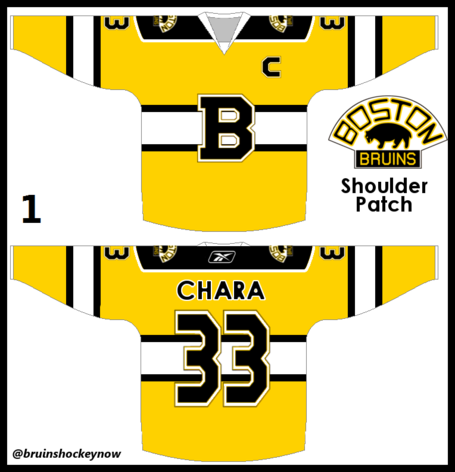 A blend of the old This concept features the capital "B" used in the 1934-1936 jerseys, along with a modified version of the 1926-1931 logo serving as the shoulder patch. The 1926-1931 logo is where the Bruins got the inspiration for their current shoulder patch/third jersey main logo. This jersey would be worn with black pants, black gloves, and a black helmet. 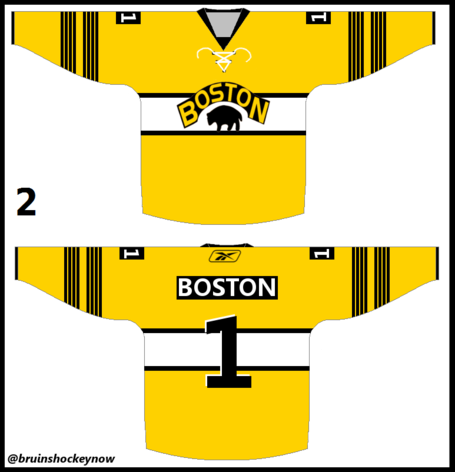 Back to the beginning This concept features a new take on the B's first logo, the weird-looking bear used from 1924-1926. The stripe across the chest and bands on the arms update the look a bit. This jersey would also be worn with black pants, black gloves, and a black helmet. 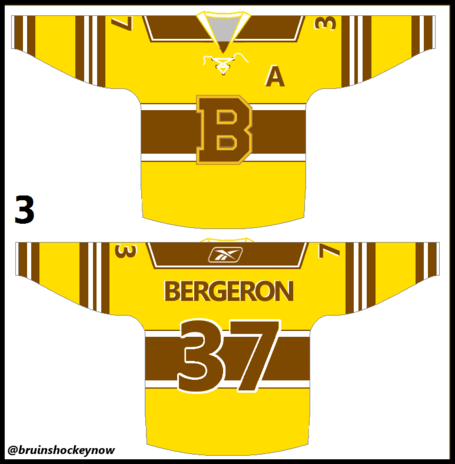 Winter Classic-y This concept is similar to the jerseys the B's wore for the 2010 Winter Classic, with a few changes. The main crest comes from the 1932-1934 jersey. Brown was heavily featured in Bruins' uniforms from 1924-1934 before it was replaced with black. This sweater would be worn with brown gloves, brown pants, and a brown helmet. 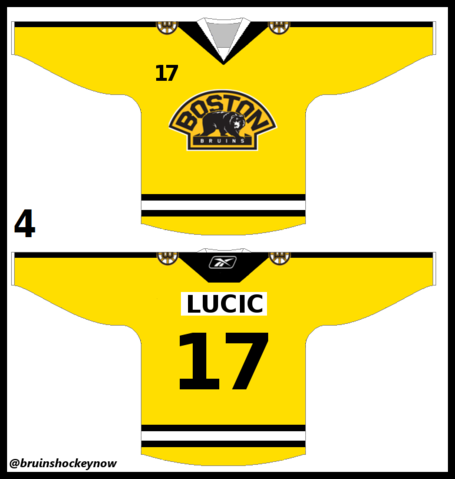 Current third, with some color This concept is basically the Bruins' current third jersey, just with gold as the primary color instead of black. It also features some striping along the bottom so it doesn't look like a giant gold t-shirt. This would be worn with black gloves, black pants, and a black helmet. 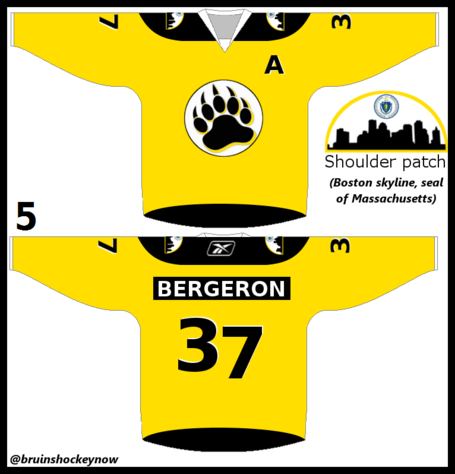 Something completely new This is one of the "original concepts," one that doesn't feature any former Bruin logos. The main crest is a bear claw with Bruins-colored accents. The shoulder patch features a silhouette of the Boston skyline along with the seal of the state of Massachusetts. The latter was inspired in part by the Calgary Flames jerseys, which feature the flag of Alberta on one shoulder. Nothing wrong with a little Massachusetts pride. This would be worn with black pants, black gloves, and a black helmet. 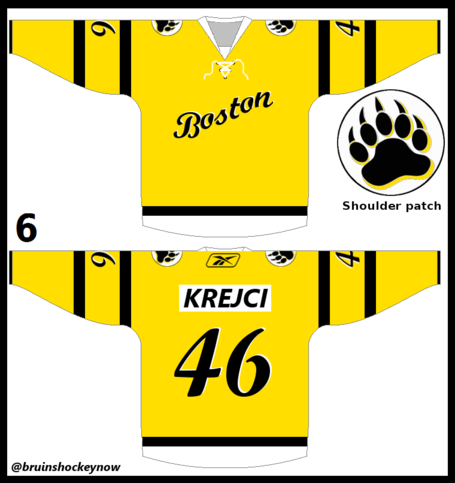 New, with a twist This one is also an original concept, though it was inspired by an older jersey. The shoulder patch here would be the same bear claw from the above concept. The main logo features "BOSTON" written in a slanted script font, something similar to what the B's did with their jerseys in the early 1940's. This would be worn with black pants, black gloves, and a black helmet. 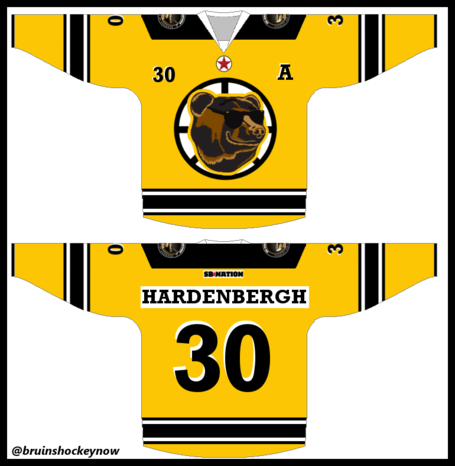 Bonus: the SCOC #TeamPooh jersey Because it had to be made, right? This concept features the #TeamPooh "deal with it" bear logo (sunglasses included), along with the Stanley Cup of Chowder logo on the shoulders. It also features the red SB Nation star on the front, and the main SB Nation logo on the back. This jersey would be worn with jean shorts and whatever else we could find in our parents' basements.