OTBH: Filling in the Ranks

Or, unexpected chances during a global conflict.

Share All sharing options for: OTBH: Filling in the Ranks

Thanks to everyone who voted in last week's OTBH topic poll! Your feedback is much appreciated.

Here's a snapshot of the results: 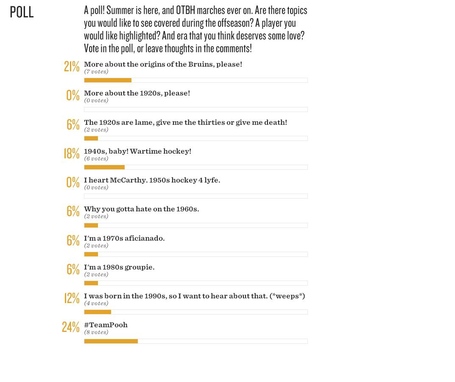 As you can see, #TeamPooh won by a large margin. Coming in second, however, was a call for more about the origins of our beloved Black and Gold. People of Chowdah, your cries for history have been heard. Working on something big to fill that request.

In the meantime, the second most voted for topic -- 1940s Bruins hockey -- is also a particular love of mine. It's a fascinating time in North American history, and in the history of hockey in Boston. So let's start there, shall we?

In particular, let's start with the Bruins of 70 years ago, and those players in black and gold staring down the barrel of the 1943-1944 season. As we all well know, the Second World War was in full swing by that point, and many players (including Milt Schmidt, among others) had laid down their hockey sticks for military service at home or abroad.

Despite wartime conditions, however, the NHL marched ever on, and so too did Art Ross and the Bruins. The Bruins -- along with the other 5 teams in the NHL at the time -- all had depleted rosters as more and more men left to serve in the war. Despite losses to both the Canadian and U.S. armed services, however, the team still had a few veterans kicking around for the 1943-1944 season: Dit Clapper anchored the defense, while Bill Cowley, Herb Cain, and Art Jackson helped fill out the forward ranks. The biggest hole to fill by far was in net, as Vezina-winning goaltender Frank Brimsek was not available, having joined the U.S. Coast Guard. With Brimsek's absence and a dwindling list of goalies in the league to choose from (the starting goalies for all six teams were serving in the military), the Bruins still didn't have a goaltender locked down five days before the season.

Said season was scheduled to begin on October 30 in Montreal, where the Bruins would play those ever-competitive Canadiens. 50 games were slated for the year between the six teams then in the league, and the previous year's Stanley Cup Champion (the Red Wings) figured to be a threat once again, but the impact of the war on teams' rosters meant that predicting the final result of the season was next to impossible.

Art Ross knew the challenge ahead for his squad; after several weeks practice in Quebec with a roster of 30, mostly young amateurs, he scheduled a total of 4 scrimmages against area teams. The first of these, against the Quebec Aces, gave Ross a chance to evaluate some of the young players called upon to fill in the gaps in the Bruins roster, including the all important role of goalie.

The two tenders called upon to play that day -- Harvey Bennett and Maurice Courteau -- were amateur players who had never participated in professional hockey at the AHL or NHL level. They split goaltending duties in that exhibition game against the Aces, a game that ended in a 3-3 tie. They would go on to again split time in an exhibition game against the Habs, as Ross tried to determine who would fill the role during the regular season. Boston media seemed to think neither player would end up being on the final roster, opining that Ross was negotiating for everyone from former Blackhawk Mike Karakas to any other number of "name" NHL goalies.

In fact, Ross was doing just that, and 24 hours before the regular season was to begin, the Bruins purchased goalie Bert Gardiner from the Canadiens to tend net. Gardiner had had some success in the league, but had declined a bit since a pretty good 1938-1939 season. As the Globe wrote the day of the acquisition, "if he [Gardiner] hasn't been the best goalie in the league, neither has he been the worst." A ringing endorsement, indeed.

The more interesting story here, though, is Bennett and Courteau. Both players had spent time in various amateur hockey leagues, including the Eastern Amateur Hockey League (EAHL). But, as the Globe pointed out on October 23, it was "unlikely that either of these amateurs [would] open the season for the Bruins against the Canadiens." They were right: it was Gardiner that started in what ended up being a 2-2 tie between the Bruins and Habs. But Bennett and Courteau stuck around past the pre-season: Courteau ended up playing 6 games, Bennett 25. Neither of them were particularly outstanding in their roles -- Courteau allowed 33 goals in those 6 games, hey-o! -- but the gaps left by players serving overseas gave both players an opportunity they would not otherwise have had to play hockey at the highest level.

Bennett and Courteau weren't alone in this -- the number of "fill-in" players that teams iced was high all across the League. The war gave some players a chance to excel on the biggest stage, and some -- including Courteau, who played for another 14 years for the Providence Reds -- took that chance and turned it into a professional career in hockey.

1943-1944 was a bit of a wacky season, and commenters at the time thought writing some of the scoring records off as flukes was the best idea, since few of the elite goaltenders were available (don't worry, Herb Cain, I still respect your scoring race win!). Despite all the turmoil -- both on the ice, and in the world around it -- hockey continued, with all it's drama and excitement, and no lack of stories of the triumph of the human (sports) spirit.

Courteau and Bennett are certainly proof of that.