Share All sharing options for: For Charity: Phil Kessel and Tyler Seguin are Elite Hockey Players

Editor's Note: This post was purchased by the fine folks at Pension Plan Puppets for a donation to Movember. Feel free to disagree in the comments instead of starting a torch and pitchfork mob.

For the third fucking time because this post keeps getting eaten by the editor, and now this post is going to be shitty because I've already written half of it twice. So fuck you. 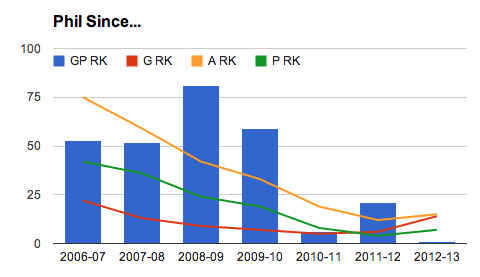 Now, this is cumulative from the season at the bottom to today. So if someone else had a great year good for them. This measures performance over time, sorta. Either way, top-20 in assists, points, goals for the last 3 seasons is pretty good. Maybe the Bruins drafting Tyler Seguin lit a fire under his ass. Maybe he's actually just a really fucking good offensive talent and the Bruins were lucky it worked out after he left. You know, like when they traded away Thornton for what amounts to peanuts and a couple years of Marco Sturm. We don't even have to get into how good Thornton is, because that's not what the fine folks at PPP asked for, but it's worth noting that he was another elite offensive talent the Bruins let go because he wasn't "tough enough" or some other trumped-up bullshit that our local writers spew all over the pages when the team gives the word. Glad he'll be in Sochi for America.

Counting stats not enough to prove that Phil fuckin' Kessel is a bad mamma jamma on the ice? Let's look at Corsi %, shall we? Yeah, look at this right here. This is Phil's WOWY chart for his time in Toronto: 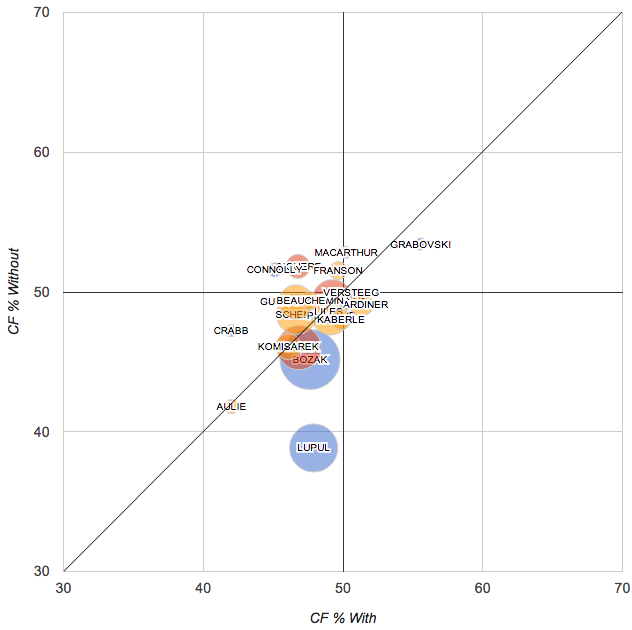 This info is via stats.hockeyanalysis.com, but I added the diagonal line. Below the line is a point for Phil, and above the line is a point against that goofy-looking dorkus malorkus. For one, you can probably ignore that Joey Crabb did a little better because it's Joey Crabb. However, look at his main linemates over that time (the biggest blue dots) - Lupul needs to watch for the bends if he pulls that number up, he's sunken so low. And Bozak. Tyler "Leafs MVP" Bozak. Even Don Cherry thinks he's bad considering how little he produces playing next to Kessel. And Bozak is Canadian. You know you're a bad hockey player when...

As for Seguin? Well, the kid hasn't proven himself that much. Oh, unless you count when he dropped 4 points in a Conference Finals game. Or the time he led the Bruins in points in 2011-12. Sure, he dipped a bit last year but you have to think over a full season he might turn that around. Maybe he's distracted or whatever, but look for his chart to look a lot like Phil's over the next 4 seasons. Let's look at the Corsi Chart. Much like Phil's above, anybody under the diagonal line is a feather in TyTy's cap: 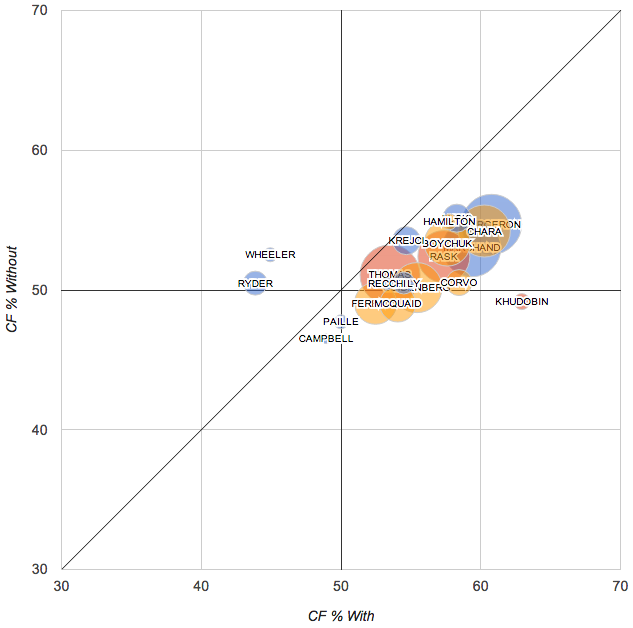 Again, this info is via stats.hockeyanalysis.com. Now, one thing to note is that TyTy's charts are with the 2010-2013 Bruins, and Phil's is with the Maple Leafs. Unless you're Blake Wheeler or Michael Ryder, your game got stepped the hell up when TyTy was chopping ice with you. That's remarkable, really. Few players have such a noticeable change. Go ahead and check out Patrice Bergeron's CF% WOWY Chart (second one down on that page) and look at the similarities to TyTy. Sure, Patrice's is better. It's Patrice Bergeron. But it's not like Seguin's is all that much worse. The kid is an incredible talent.

There are 38 players in the Hall of Fame that scored as many points as Seguin did in his first 3 years, and plenty who didn't. Honestly, if you overlook the physical part of the game and just look at scoring, Seguin has had a similar first 3 years to one Cam Neely. He turned out okay, I guess. I mean, look at where he was in his first three years, compared to Phil and TyTy:

Dallas is going to run TyTy out there with just about anybody and he's going to elevate their game. Because that's what elite hockey players do.

Again, thanks to everyone over at Pension Plan Puppets for donating to Movember. It helps a great cause (fighting cancer) and leads me to write salty diatribes like this one.