This edition of "Rearview Mirror" takes a look back at the Bruins' epic run through November and December of 2008. Over the course of those two months, the B's laid waste to the NHL, winning 23 of 26 games.

Share All sharing options for: Rearview Mirror: 23 wins in 26 games

Compared to previous years, the weeks leading up to the 2008-2009 season were different for the Boston Bruins and their fans. For the first time since the 2004-2005 season was lost due to a lockout, the Bruins were shouldering the weight of increased expectations.

A rollicking, riveting, seven-game Eastern Conference Quarterfinal loss to the Montreal Canadiens in April of 2008, the team's first post-lockout playoff appearance, led fans to believe that the Bruins were finally headed in the right direction. Boston hockey fans and media pundits expected the Bruins to, at the very least, take the "next step" in 2008-2009 and collect the franchise's first playoff series win of the 21st century.

For the first time in years, "getting there" wasn't going to be good enough for anyone associated with the Boston Bruins. This team was expected to make some noise.

Bruins fans had a myriad of reasons to be confident going into the 08-09 campaign. The gritty, young bunch that had pushed the top-seeded Canadiens to the brink in the previous spring was now armed with invaluable big-game playoff experience. Also, GM Peter Chiarelli had been aggressive in upgrading his team in the offseason, adding former University of Minnesota standout Blake Wheeler, former Canadiens sniper Michael Ryder, and veteran face-off wizard Stephane Yelle to a lineup that already featured rising young guns like Phil Kessel, Milan Lucic, David Krejci, and Vladimir Sobotka.

Goalie Tim Thomas had shown signs of brilliance in 2007-2008, Zdeno Chara was settling into his role as team captain, and Patrice Bergeron was healthy and ready to go after missing most of the 07-08 season due to a concussion.

As the curtain rose on the 2008-2009 season, it was clear that this team wasn't built to just get to the postseason, but was built to win. And when the puck dropped on the campaign in Denver, the upgraded B's got off on the right foot with a 5-4 win over the Avalanche. Bergeron was effective, Wheeler scored in his first NHL game, and life was good.

However, the B's dropped four of their next six games, and couldn't seem to get any kind of momentum going.

Then Steve Ott and Co. came to town, and everything changed.

The Nov. 1 game between the Bruins and Dallas Stars at TD Garden figured to be like any other early-season inter-conference game: little physicality, tentative play, and a generally boring affair. East vs. West games in the NHL are usually odd contests, with teams playing different styles and very little flow to the game. True to form, the game started out pretty normally: it was a 1-1 contest going into the second period, and it seemed like it'd be a standard bit of NHL fare.

Instead, it became a game that arguably changed the face of the entire franchise, injecting a swagger and confidence into the team that Bruins fans hadn't seen since the early 1990's.

Ott got things started with a low hit on Yelle, and when Shawn Thornton came calling, Ott decided to turtle. Later, Ott left his feet in a hit on the end boards, then refused to fight Shane Hnidy. Ott's comeuppance came in the third period, when he was flattened by an open-ice check from Andrew Ference. Ott's teammate Sean Avery took exception and fought Ference, and the game turned into a full-on donnybrook.

Marty Turco elbowed Phil Kessel in the face. Ott tried to low-bridge Lucic. Thornton fought Krys Barch. Marc Savard jumped Avery. Hnidy rearranged Matt Niskanen's face. And the Bruins went on to an inspiring 5-1 win at the Garden, finally achieving what Chiarelli had hoped to accomplish when he took the GM job: the Bruins made the Garden a difficult place for visiting teams to play a game in again.

It wasn't known at the time, but that's not all that was achieved with that win: it was the start of something special. 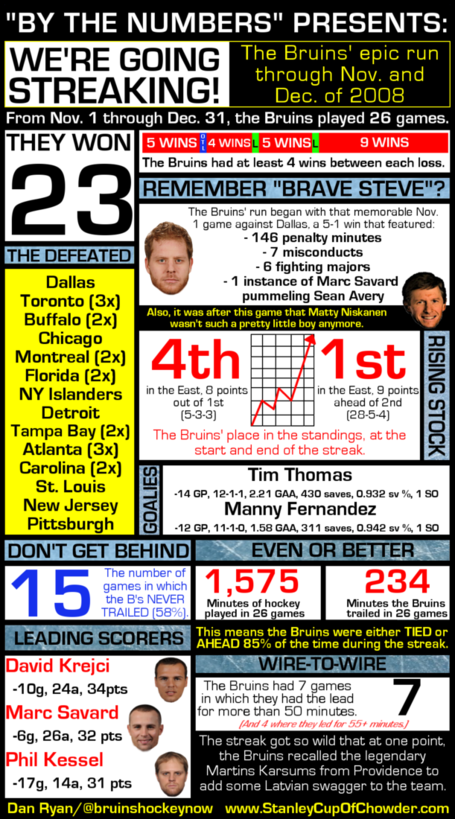 Before the Stars game started, the Bruins were 5-3-3 and sitting in fourth place in the Eastern Conference. After the Stars game, the team didn't lose a game at TD Garden until January, and only lost three games overall.

The Stars game was the start of a five-game winning streak that saw the B's also trump Toronto, Buffalo, and Chicago, then punctuate the streak with a 6-1 thumping of the Canadiens. After that game, the Canadiens wouldn't beat the Bruins again in a meaningful game until November of 2009.

Even in defeat, the Bruins impressed. For example, the B's lost to the Rangers, 3-2 in a shootout, on Nov. 15, but never trailed in the game. They were either tied or ahead until the shootout ended in a Ranger victory.That loss was followed by four more wins, then a regulation loss to the Sabres was followed by five more wins in a row. The Capitals topped the B's by a score of 3-1 on December 10, the only time the Bruins would be defeated in the year's final month. They went on to win their last nine December contests (and another on Jan. 1 to run the streak to 10).

Truthfully, however, the run was powered by some historic offense. Kessel had an 18-game point streak that spanned November and December, tied for the longest-ever streak by an American. During the streak's 26 games, Kessel scored 17 goals and added 14 assists.

Krejci led the charge point-wise, with 10-24-34 totals during the streak. Savard also checked in at better than a point per game, with a 6-26-32 stat line. Wheeler chipped in 20 points, while Ryder added 18.

Here are some other impressive numbers from the B's run:

This 26-game run put the Bruin franchise back on the NHL landscape, elevating the B's from a scrappy team to a force to be reckoned with. The run was a historic one, and while the eleven-game point streak in 2011 surpassed it in terms of length, it didn't do nearly as much for the confidence of the team or franchise.

The Bruins had their ups and downs for the rest of the season: Bergeron was concussed again in late December and Kessel cooled off, but the team won 50 games for the first time since 1993 and swept the hated Canadiens in the first round of the playoffs, a series that was about as lopsided as a playoff series can be.

Bruins fans know how this season ended: with a crushing loss to an inferior (on paper, at least) Carolina team. After the season ended, this many members of this bunch of Bruins headed elsewhere: Kessel left for Toronto, PJ Axelsson went home, and Yelle, Fernandez, Hnidy, and Steve Montador were allowed to walk.

However, this run left an indelible mark on the franchise, and gave it a confidence boost that is still with the team today, lifting the Bruins out of the pack of also-rans and into the ranks of the NHL elite.

And to think, it all started on that raucous November night at the Garden, where one "knee-seeking scud' brought a team together and set a franchise on the right course.